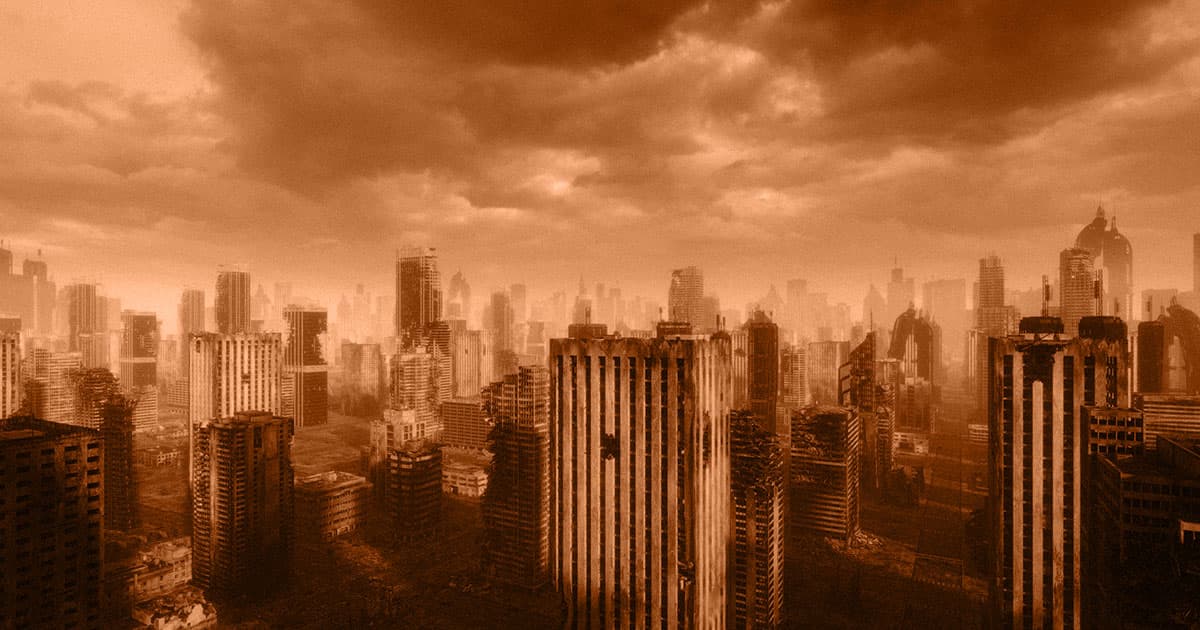 For the better part of the last century, one question has dogged humanity: what would happen after a nuclear war?

Climate scientists devised a terrifying simulation to find answers, published in the Nature Food journal this week, and the results are nothing short of apocalyptic.

The waves of terror would be almost impossible to comprehend. Death at ground zero for miles around. Famine. Radiation. Climate destruction. It's all there, and all as horrific as imaginable.

As the researchers at Rutgers noted in their study, it wouldn't even necessarily take two global superpowers to lead to mass death.

If any nuclear-armed country were to attack another with a nuclear weapon — the scientists used the lengthy geopolitical dispute between India and Pakistan over the Kashmir region as an example — not only would they kill countless people at and around the site of their target, but the soot from the detonations would cause such devastation to the global climate that upwards of five billion people would be at risk of death. For perspective, that's more than half the global population.

While this all sounds very "Biblical plague," the Rutgers climate science simulation is grounded in atmospheric science. The soot from the blast and the leftover burning could be enough to partially or completely encircle the planet, the study found, which would in turn result in further global cooling and harm agriculture so harshly that there would be a reduction in food production from anywhere between 7 and 90 percent, depending on the size of the nuclear conflict.

A India-Pakistan-sized war would blast between five and 47 million tons of soot into the atmosphere. If the US and Russia were to have it out, it would release 150 million tons of soot, cutting the global food supply by 90 percent. That level of famine would lead to death at an incredible scale within the first three to four years after a war, and would add to the death toll of the blasts and their aftermaths as well.

While these horrific scenarios are absolutely nightmarish, the researchers did note a few caveats. First, that the simulation required lots of simplifications and presumptions about how global food supply chains would react during nuclear winter. And second, even in worst-case scenarios, there are regions that could fare better than others, with Australia seeming to fare the best on their devastation-prediction maps.

"The first time I showed my son the map," Lily Xia, the Rutgers climate scientist who led the research, said in a Nature new release, "the first reaction he had is 'let’s move to Australia.'"

Nonetheless, the findings from this simulation are jarring and should be taken as seriously as a heart attack.

"A large percent of the people will be starving,” Xia warned. "It’s really bad."

Given these stark possibilities, it's very hard to argue.

Read This Next
Doomsday Machine
Here's Exactly How Screwed You'd Be in a Nuclear Apocalypse
Futurism
Spring Might Come Earlier, but Food Shortages Will Still Happen
Futurism
This Is What Nuclear Warfare Will Do To Our Planet
More on Earth & Energy
Sowloon Walled City
4:57 PM on the byte
China Growing Pigs in Huge High Rise Buildings
Crust Punk
3:02 PM on the byte
Scientists Discover Molten Hell Zone Beneath Earth's Tectonic Plates
His Power
Yesterday on the byte
Scientists Develop Compound That Kills So Efficiently They Named It After Keanu Reeves
READ MORE STORIES ABOUT / Earth & Energy
Keep up.
Subscribe to our daily newsletter to keep in touch with the subjects shaping our future.
+Social+Newsletter
TopicsAbout UsContact Us
Copyright ©, Camden Media Inc All Rights Reserved. See our User Agreement, Privacy Policy and Data Use Policy. The material on this site may not be reproduced, distributed, transmitted, cached or otherwise used, except with prior written permission of Futurism. Articles may contain affiliate links which enable us to share in the revenue of any purchases made.
Fonts by Typekit and Monotype.