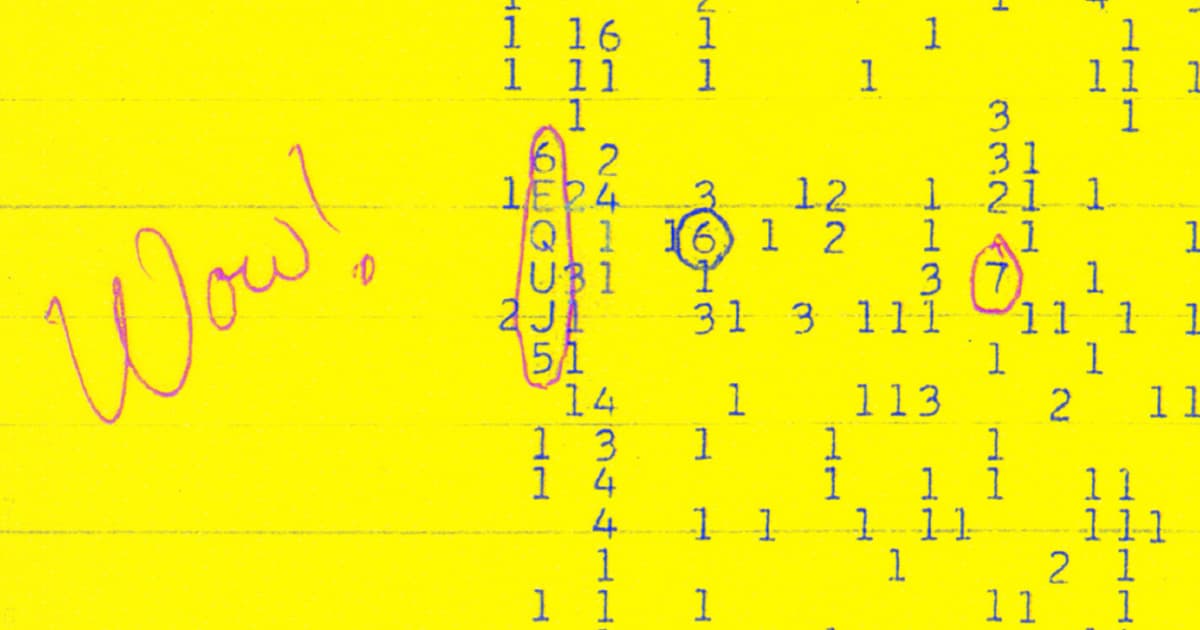 New research claims to have identified the source of a 72-second extraterrestrial signal captured in 1977.

New research claims to have identified the source of a 72-second extraterrestrial signal captured in 1977.

Finally, someone has identified what's likely the source of the "Wow! signal," a SETI oddity that has perplexed astronomers for since its discovery.

The Wow! signal is an unusually powerful 72-second-long extraterrestrial signal picked up by the Big Ear radiotelescope in 1977. It's never been repeated, and scientists never identified its source. The signal, named after the comment that the astronomer who analyzed the data wrote in the margins, is thought by many — including its original finders — to be the most promising alien technosignature candidate in the history of SETI.

But as Astronomy Magazine reports, amateur astronomer Alberto Caballero has now traced the signal back to a star that closely resembles our Sun — a discovery that sheds new light on what has for decades been a hallmark of SETI research.

This star identified by Caballero eluded scientists who went on the hunt for the signal's source after it was discovered. The problem was that there didn't seem to be any Sun-like stars in the area where the Wow! signal seemed to have originated.

Thankfully, Caballero's research relies on a more updated view of the cosmos, so he had more resources and catalogs to probe than astronomers did decades ago. Since 2013, the European Space Agency's Gaia space observatory has been assembling a 3D map of the galaxy, according to Astronomy, and it's already cataloged 1.3 billion stars.

The Gaia map is far more detailed than what astronomers used to hunt for the Wow! signal's origin in the past, and Caballero was able to identify a Sun-like star in the Sagittarius constellation, right where the signal seems to have come from.

There are other stars in the area, Astronomy notes, so the work is far from definitive. But after years of stagnation, it's a major step forward in the ongoing Wow! search.

More on the Wow! signal: The Real Science Behind Supposed Alien Communications

Space Sick
Space Is Wreaking Havoc on Astronauts' Blood
Jan 15
Read More
Water Elemental
NASA Astronaut Says He Almost Drowned During Spacewalk
11. 7. 21
Read More
From Our Partners
Put The Solar System In Your Living Room With These Celestial Lamps
3. 27. 21
Read More
+Social+Newsletter
TopicsAbout UsContact Us
Copyright ©, Camden Media Inc All Rights Reserved. See our User Agreement, Privacy Policy and Data Use Policy. The material on this site may not be reproduced, distributed, transmitted, cached or otherwise used, except with prior written permission of Futurism. Fonts by Typekit and Monotype.