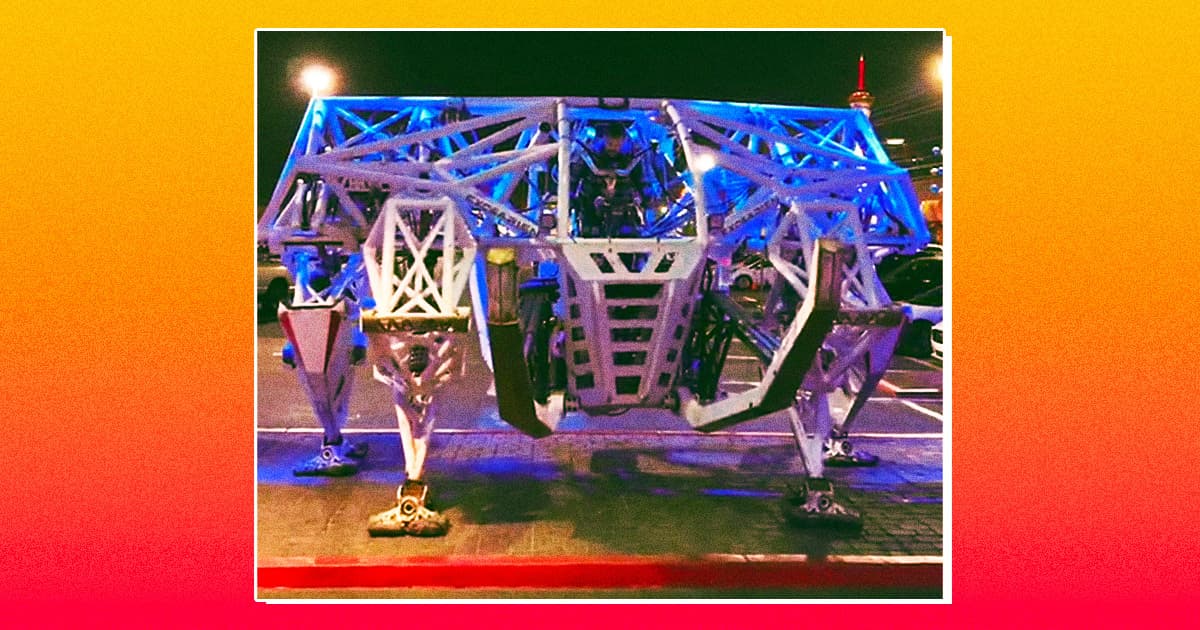 You Shall Not Pass

The machine, which we've covered a few times before, is intimating. But as Tippet told Forbes, that's one of the reasons why it was good for the one-night bouncing gig.

"It's the bouncer so it has to do its job," said Tippet, "basically just by looking menacing,"

Like the exoskeletons in James Cameron's "Avatar" and "Aliens" movies, or Scrappy Doo's Mr. Bean suit, the robot requires that an operating human sits inside. Thus, the suit is more so an extension of a human's capabilities, rather than a replacement.

That said, Feinstein doesn't think that Mech "The Bot" Johnson would actually be that good of a bouncer, should they ever want to employ it full time — bouncing, he says, requires "more of a hands-on approach than a robot, and it may not be able to react to all the situations we encounter." Sorry, Mech.

The Sapphire club has experimented with robots before. Back in 2018, the celebrated CES by showing off some decidedly spooky robotic dancers. But despite his penchant for having a lil' technological fun during the city's massive tech conference, Feinstein doesn't think that full-time humanoid bots would resonate very well with his audience.

"I think men, I always say, live in hope," Feinstein reportedly pondered. "I don't see them hoping to be with a robot entertainer. I think they're looking for the real deal."

In any case, here's to both Mech "The Bot" Johnson — as well as the absolutely top-notch Sapphire marketing team. May CES continue to inspire unhinged tech gags for the many tech conferences to come.

READ MORE: I, For One, Welcome Our Strip Club Bouncer Robot Overlords [Forbes]

Thanks, but No Thanks
Oakland Police Want to Arm Robots With Shotguns, Because We Live in a Dystopian Nightmare
10. 17. 22
Read More
Unholy Diver
Terrifying Humanoid Diving Robot With "Human" Sense of Touch Explores Shipwreck
8. 1. 22
Read More
Diner Drama
People Furious at Robot Serving Pancakes at Denny's
11. 28. 21
Read More
+Social+Newsletter
TopicsAbout UsContact Us
Copyright ©, Camden Media Inc All Rights Reserved. See our User Agreement, Privacy Policy and Data Use Policy. The material on this site may not be reproduced, distributed, transmitted, cached or otherwise used, except with prior written permission of Futurism. Articles may contain affiliate links which enable us to share in the revenue of any purchases made.
Fonts by Typekit and Monotype.