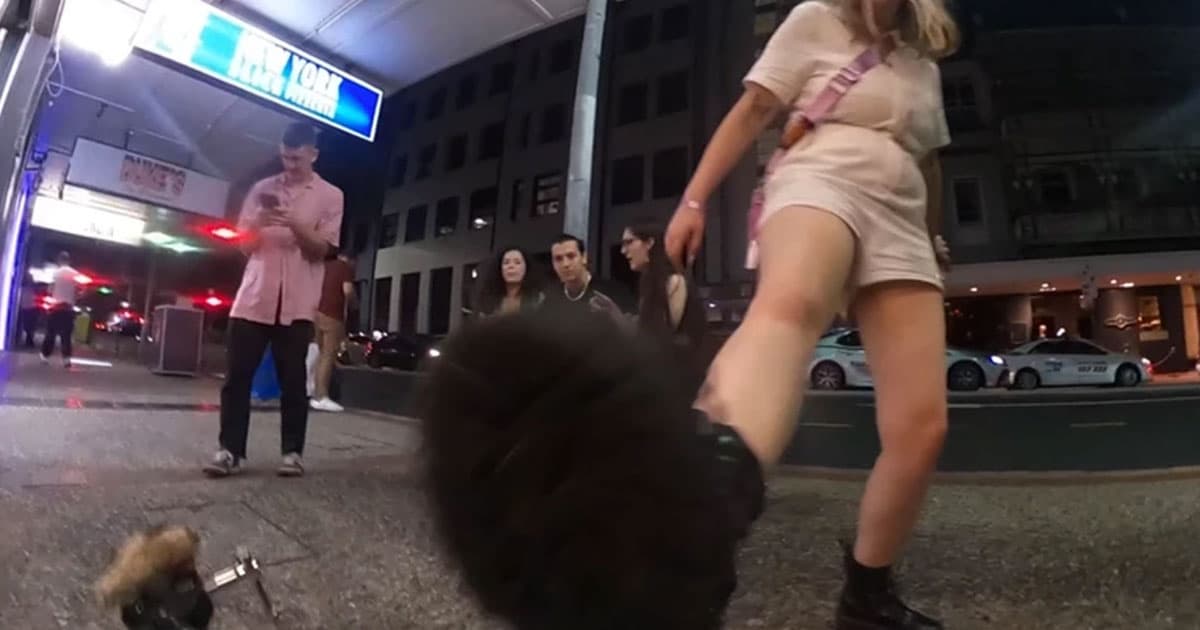 Thanks to one belligerent Aussie, an expensive robot dog that was trawling the streets of Brisbane late at night got the crap kicked out of it for no apparent reason.

In an interview with Vice, that robodog's operator Mark Trueno said that he's not really sure why the woman twice kicked "Stampy," the $15,000 prototype of a military-grade robot his company is working on — but it could have had something to do with the fact that it was 2:30am on a street in Brisbane known for its rowdy drunkards when the assault occurred.

"I'm not really sure why she did it, probably just thought it was funny at the time, " Trueno, who works as an engineer for the Australian military and mining equipment company Arrowpoint Systems, told Vice.

In a stupidly-titled Facebook video filmed by Stampy himself, the woman is twice seen assaulting the bot, in what Trueno said resulted in $2,500 in damage to its sensors.

Stampy is, Trueno explained, a "smaller version" of some heavy-duty robots Arrowpoint is developing that can be tricked out with gas sensors and 3D map-generating tech — though Trueno said that he sometimes uses his to walk his cat, Chairman Meow, in the park.

While the fleshed-out versions of Stampy will be used on search-and-rescue missions and other situations too dangerous for humans to venture into, Trueno told Vice he's been testing out the robot in street environments to see how well it could handle obstacles and utilize its mapping technology.

There's also the small issue of not having "any mineshafts handy nearby" to test Stampy out on either, the engineer added.

Trueno seems, by all accounts, pretty irked that someone would kick the robot just for the hell of it, and said in his Facebook post that she kicked it "with enough force to cause damage to the forward facing sensor array."

In that same Facebook post, Trueno offered $500 to "whoever helps track her down" — and as he later told Vice, he was contacted by someone who, he believes, is the friend seen chiding the aggressive woman both times she kicked the robot. He added that he'd spoken to the young woman in the video, who told him that she'd almost broken her toe kicking the surprisingly-heavy e-pup.

More on robots: Italy Invents Robot That Carves Sculptures Out of Marble Like Michelangelo