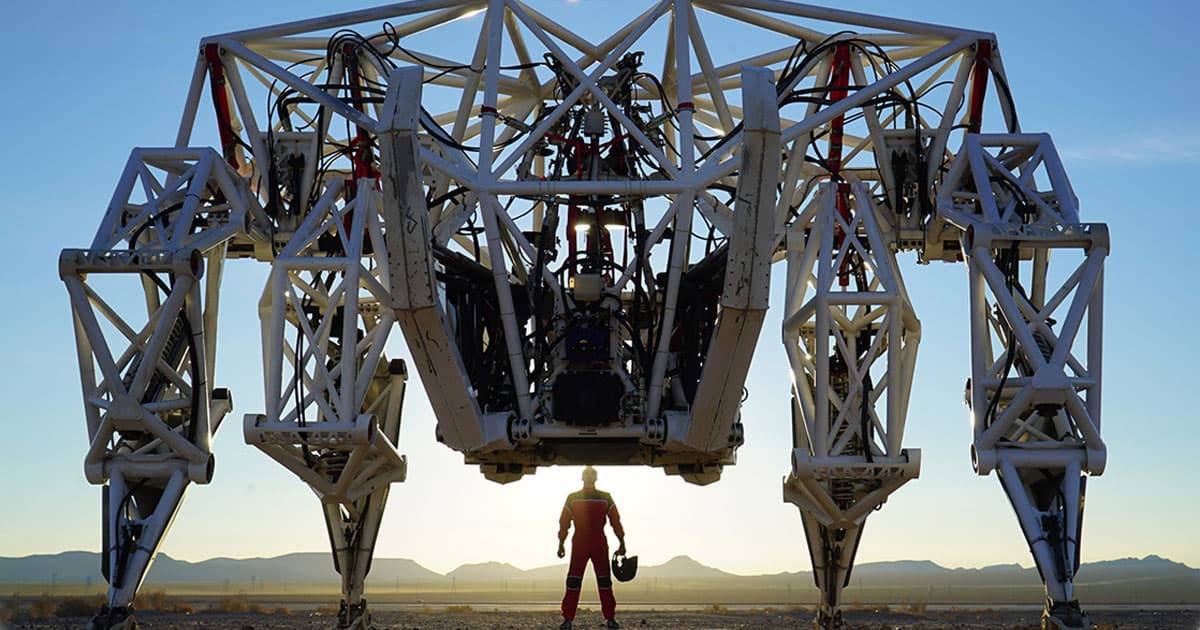 Engineering firm Furrion Exo-Bionics has built a massive, four-legged mech suit called Prosthesis, a 9,000 pound monstrosity straight out of "Pacific Rim" — and it wants you to pilot it.

The company recently put out a call on Kickstarter, asking enthusiasts if they'd like to help them build a "global racing league that would pit multiple world-class athletes in head-to-head competitions, through complex technical obstacle courses, wearing giant powered mech suits."

Depending on the level of commitment, fans are able to receive "one-on-one mech pilot training," or watch the action unfold in person at live events.

The one flagship mech suit the company has already built, Prosthesis, has four enormous legs, allowing the pilot to go for a badass stroll — and even pick up cars. "We ended up with four legs because the pilot has four limbs, and the machine has the wide stable form factor that it has so that it's easy to balance," co-founder and chief test pilot Jonathan Tippett told CNET.

"It's basically a cross between a trophy truck, an excavator, and a dinosaur," Tippett said in their video kicking off their crowdfunding campaign.

To make Prosthesis move, the pilot has to move both their arms and legs. That movement then gets translated and amplified to the four massive limbs. "That’s what makes it a sport," reads the Kickstarter page.

The first professional "mech sports" athlete was Cassie Hawrysh, a Canadian headfirst ice sledding champion, who picked up how to control the beast over a three-day training session.

As Tippett himself admits in a separate video profiling Hawrysh, the company had no idea how ice sledding would translate to piloting a 9,000 pound mech suit, if at all — but was excited to find out.

READ MORE: Prosthesis is a real-life mech suit you can pilot, like the Power Loader [CNET]

More on mech suits: The 8,000 Exoskeleton Mech Suit You Can Race

Guardian Exoskeleton
The U.S. Military is Buying a Brutal-Looking Powered Exoskeleton
3. 19. 19
Read More
Customized "Exosuits" Will Move With Your Stride
2. 28. 18
Read More
Russia's Next-Gen Combat Suit is Getting Tech That's Resistant to Nuclear Blasts
10. 12. 17
Read More
+Social+Newsletter
TopicsAbout UsContact Us
Copyright ©, Camden Media Inc All Rights Reserved. See our User Agreement, Privacy Policy and Data Use Policy. The material on this site may not be reproduced, distributed, transmitted, cached or otherwise used, except with prior written permission of Futurism. Articles may contain affiliate links which enable us to share in the revenue of any purchases made.
Fonts by Typekit and Monotype.