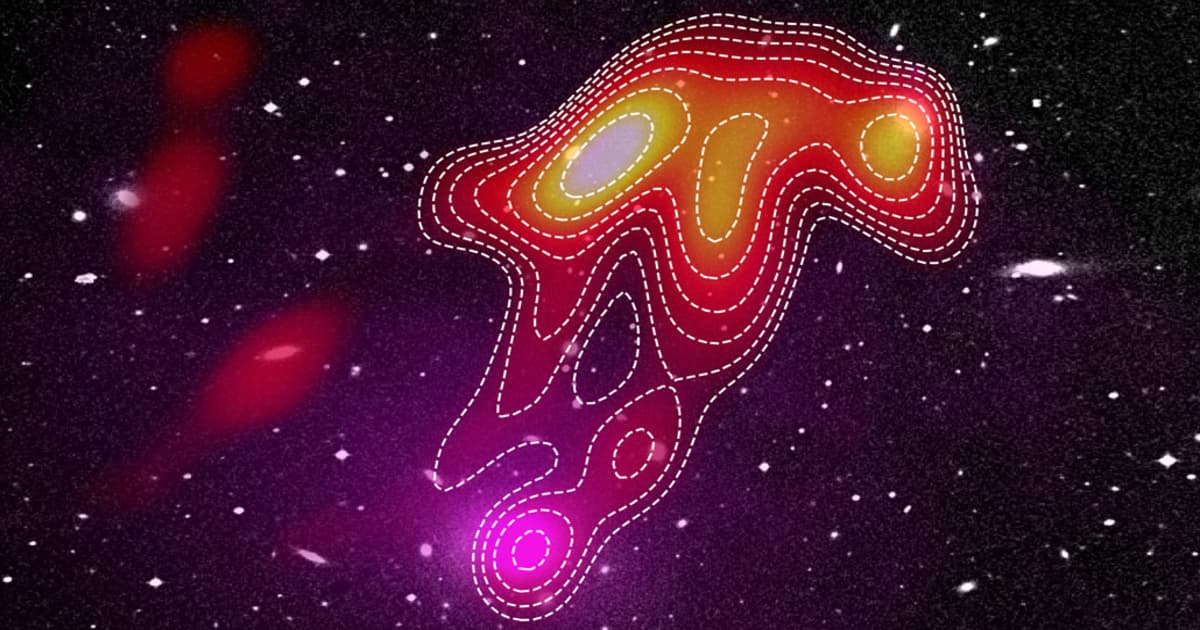 Researchers say the object looks like a cosmic jellyfish.

Researchers say the object looks like a cosmic jellyfish.

Researchers have detected ultra-low radio frequencies being emitted from a jellyfish-shaped object in a distant galaxy cluster.

The mysterious object is located 340 million lightyears from Earth in the galaxy cluster Abell 2877, according to ScienceNews. The researchers behind a paper published in The Astrophysical Journal say they used the Murchison Widefield Array (MWA) radio telescope in western Australia to discover the ultra-low radio frequencies — and its distinct shape.

"We looked at the data, and as we turned down the frequency, we saw a ghostly jelly-fish like structure begin to emerge," said Torrance Hodgson, lead author and PhD candidate from the International Centre for Radio Astronomy Research in Perth, in a press release.

Researchers dubbed the object "USS Jellyfish"— but don’t be quick to assume that it’s a nod to Star Trek. "USS" actually indicates its "ultra-steep-spectrum" radio frequency.

As you can imagine, studying radio frequencies from 340 million lightyears away presents its own special set of challenges.

"We’ve had to undertake some cosmic archeology to understand the ancient background story of the jellyfish," said Hodgson in the press release.

However, they’ve been able to develop a working theory of where it came from: supermassive blackholes that created "powerful jets of plasma" about two billion years ago.

"This plasma faded, went quiet, and lay dormant," Hodgson said. "Then quite recently, two things happened — the plasma started mixing at the same time as very gentle shock waves passed through the system. This has briefly reignited the plasma, lighting up the jellyfish and its tentacles for us to see."

The Right Tool for the Job

Hopefully, we won’t have to wait long until researchers discover more about the cosmic jellyfish since construction on the new Square Kilometre Array (SKA) has begun. Researchers anticipate that the radio telescope will give us a far better look at the object.

"The SKA will be thousands of times more sensitive and have much better resolution than the MWA, so there may be many other mysterious radio jellyfish waiting to be discovered once its operation," said professor Melanie Johnston-Hollitt, the paper’s co-author and Hodgson’s supervisor, in a press release.

The radio telescope will also give researchers a look at some of the first galaxies to have ever emerged in the universe. It’d be cool, though, if they discovered a cosmic shark or whale to join USS Jellyfish in our space aquarium.

Dark Matter Mystery
Dark Matter's Effect Is 10x What It Should Be, Scientists Say
9. 11. 20
Read More
Weak Black Holes
NASA Finds Supermassive Black Hole Birthing Stars at "Furious Rate"
11. 19. 19
Read More
Robot Ridicule
Hilarious Video Shows Boston Dynamics Robot Failing Horribly
Yesterday
Read More
+Social+Newsletter
TopicsAbout UsContact Us
Copyright ©, Camden Media Inc All Rights Reserved. See our User Agreement, Privacy Policy and Data Use Policy. The material on this site may not be reproduced, distributed, transmitted, cached or otherwise used, except with prior written permission of Futurism. Articles may contain affiliate links which enable us to share in the revenue of any purchases made.
Fonts by Typekit and Monotype.