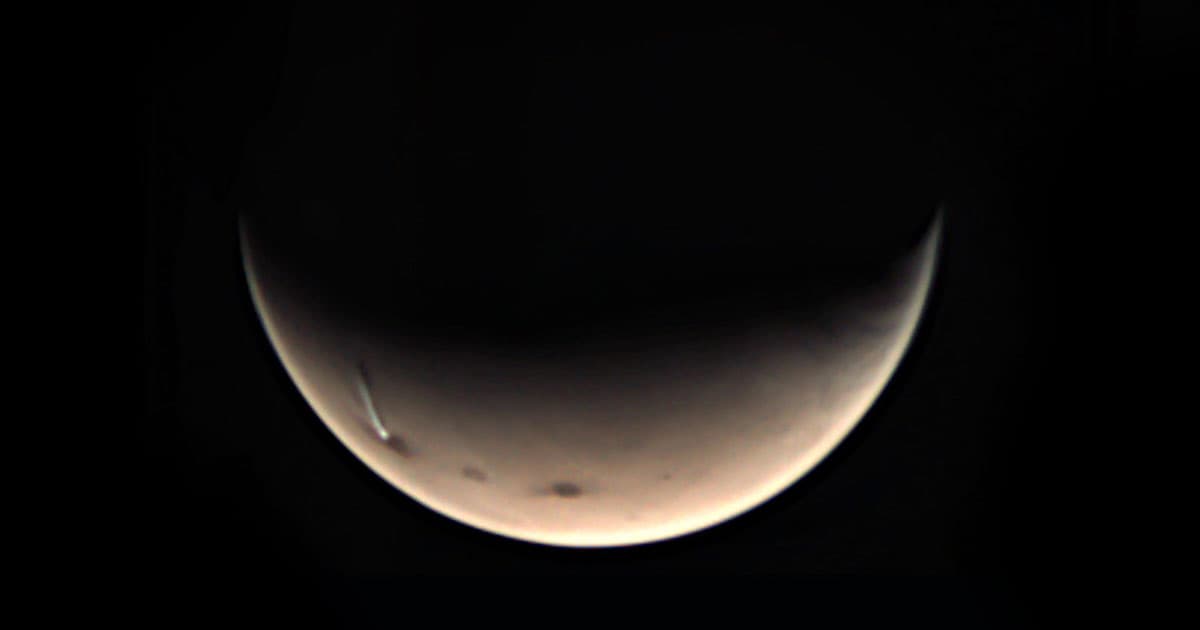 Scientists are puzzled by a thousand-mile cloud, hovering over an ancient Martian volcano.

Scientists are puzzled by a thousand-mile cloud, hovering over an ancient Martian volcano.

The spacecraft, and other ones like it, have been following the strange cloud's evolution since 2009. Now, new images revealed this week by the ESA show that the cloud has persisted.

Scans suggest that the mystery cloud is not linked to volcanic activity in any way — the last time Arsia Mons was active was about 50 million years ago, according to NASA. Instead, scientists suspect it's a cloud made up of water ice flowing down the sloping sides of the volcano.

The cloud, as spotted in the latest images taken on July 17 and 19 by Mars Express's Visual Monitoring Camera (VMC), appears to be up to 1,800 kilometers in length.

And it doesn't last long, either. Each Martian year, around the time of Mars' southern solstice — the equivalent of December 21 here on Earth — the cloud grows for a few hours each day and quickly fades away again.

"This elongated cloud forms every Martian year during this season around the southern solstice, and repeats for 80 days or even more, following a rapid daily cycle," Jorge Hernandez-Bernal, PhD candidate at the University of the Basque Country, and lead author of an ongoing study into the cloud, said in an ESA statement. "However, we don’t know yet if the clouds are always quite this impressive."

It's an unusual observation made possible thanks to the VMC's wide field of view and highly elliptical orbit.

More on Mars: NASA Blasts Off Most Sophisticated Mars Mission in Human History