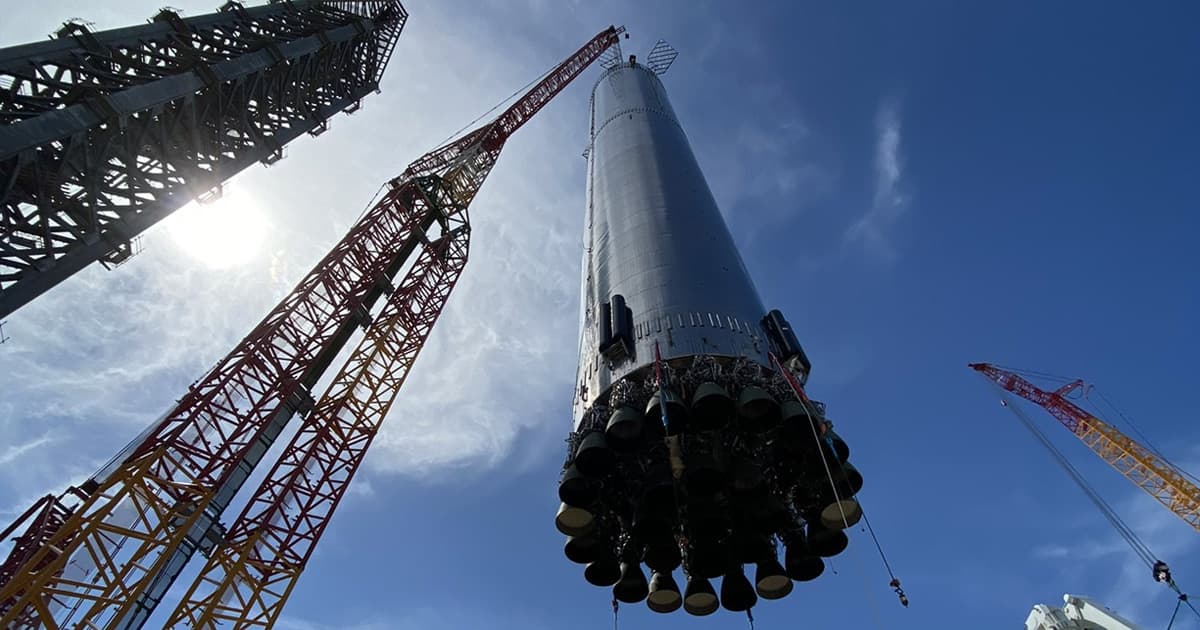 Starship is almost ready for liftoff.

Starship is almost ready for liftoff.

SpaceX is finally getting ready to stack its 160-foot Starship prototype, dubbed Ship 20, on top of its even taller orbital-class Super Heavy booster, Booster 4, in South Texas.

It's a momentous occasion for the Elon Musk-led company, as it will mark the first time the spacecraft will be seated on top of a booster — and, in all likelihood, will precede the spacecraft's maiden voyage to space.

Unless, of course, it explodes like several previous prototypes.

The company had been hoping to launch its first orbital test flight as early as last month — but when it will actually happen is still unclear. The Federal Aviation Administration is still in the midst of conducting an environmental review.

Booster 4 was lifted into the air by a gigantic crane on Wednesday afternoon and lowered onto the orbital launch pad's "launch table," Teslarati reports. Images shared by Musk show the gigantic structure, featuring 29 Raptor engines, suspended around 100 feet in the air.

Meanwhile, Ship 20 is slowly making its way to the crane, which will eventually stack it on top of Booster 4.

If all goes well, the booster will eventually carry Starship high into the Earth's atmosphere. Starship will then ignite its own engines and propel itself into orbit.

According to documents filed with the Federal Communications Commission, SpaceX will attempt to land the Booster in the Gulf of Mexico. Starship will fly off the coast of the Hawaiian island of Kauai for a "soft ocean landing."

And we'll be watching.