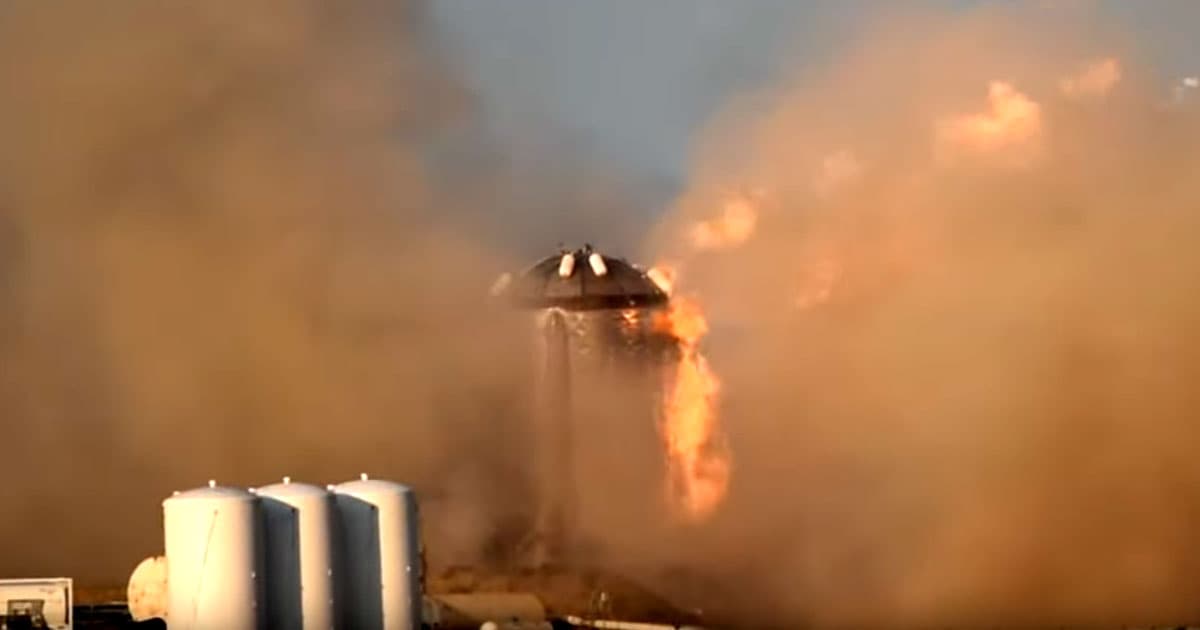 SpaceX Starhopper Will Fly for the Last Time Tonight

SpaceX is gearing up for the last flight test of its Starhopper test vehicle at its Boca Chica test site in Texas. The plan is to "hop" to an altitude of 150 meters or 492 feet — and, in the process, lay the groundwork for its upcoming Starship spacecraft.

The test vehicle's first untethered flight in July was a success. Two separate videos, uploaded by SpaceX CEO Elon Musk, showed the scaled-down but still enormous test vehicle hovering freely in the air for a few seconds before gently descending back to the ground.

Local authorities from the surrounding Cameron County noted that a "malfunction of the SpaceX vehicle during flight" could possibly end up "breaking windows," according to the Brownsville Herald. They also recommended nearby residents leave their homes during the test flight, which is expected to take place this afternoon.

The warnings aren't completely unfounded. Starhopper was engulfed in a massive fireball during a test malfunction in July — and that was during a much smaller and shorter trial run.

After Starhopper, SpaceX will turn its attention to the two full-scale Starship prototypes at the Boca Chica test site and in Cocoa, Florida. SpaceX's heavy lift "Super Heavy" rocket is expected to lift the final iteration of the spacecraft, Ars Technica reports.

If all goes well, SpaceX’s Starship rocket could eventually ferry up to 100 passengers at a time to the Moon and far beyond.

READ MORE: One way or another, Starhopper about to make its final flight [Ars Technica]

More on Starhopper: SpaceX “Starhopper” Will Attempt Longest Flight Yet This Weekend