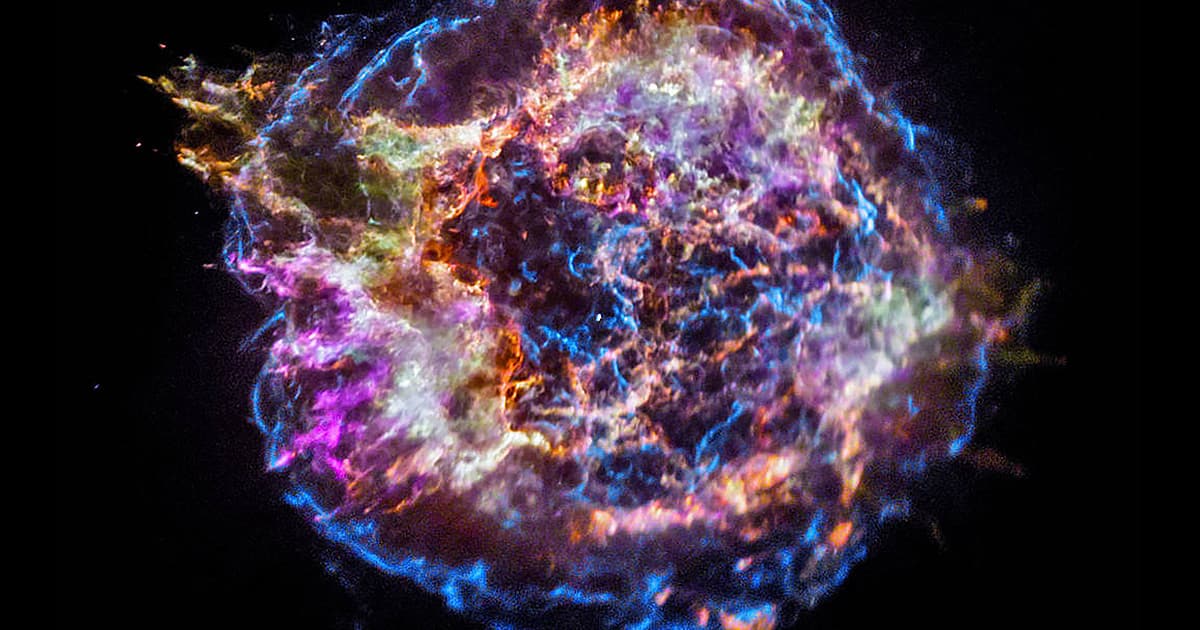 The universe is a dangerous place.

The universe is a dangerous place.

Before the star Cassiopeia A exploded in a supernova, something had already come by and stripped it bare.

The clouds of gas expelled by the supernova, Live Science reports, are missing hydrogen, which usually forms the outer layer of a star while heavier elements stay toward the core. Now, scientists think they know why: Cas A may have been too close to the earlier supernova of its neighbor, an explosion that would have been strong enough to blow the hydrogen layer away.

An international team of astronomers modeled how when one star in a binary system blows up, it can essentially "sandblast" the other one, as Live Science put it. Their research, published in the journal Monthly Notices of the Royal Astronomical Society, matches the existing data on what happened to Cas A and similar binary supernovae.

"This is enough for the second supernova of the binary system to become a stripped-envelope supernova," lead author Ryosuke Hirai, a researcher at The Australian Research Council Centre of Excellence for Gravitational Wave Discovery, said in a press release, "confirming that our proposed scenario is plausible."

The first supernova taking away Cas A's outer layer of hydrogen also likely sent it into a wildly unstable state, Live Science reports, potentially speeding up its own death.

The new research is only a model. But just as those models predicted, the researchers found a cloud of hydrogen 50 lightyears away: a shattered remnant from the first explosion.

Editor's note 10/7/2020: An earlier version of this story misstated Cas A's distance from Earth. It has been updated.

READ MORE: Something huge ripped the skin off this star before it died [Live Science]

More on cosmic destruction: In Its Dying Gasp, Our Sun Will Obliterate the Asteroid Belt

Strange Stars
Astronomers Puzzled by Extremely Peculiar Object in Deep Space
Oct 25
Read More
zombie star
Scientists Puzzled by Star That Exploded in Supernova But Somehow Survived
Jun 28
Read More
Betelgeuse Betelgeuse Betelgeuse
Astronomers: This Star Isn't As Giant As We Thought, Just Closer
10. 16. 20
Read More
+Social+Newsletter
TopicsAbout UsContact Us
Copyright ©, Camden Media Inc All Rights Reserved. See our User Agreement, Privacy Policy and Data Use Policy. The material on this site may not be reproduced, distributed, transmitted, cached or otherwise used, except with prior written permission of Futurism. Articles may contain affiliate links which enable us to share in the revenue of any purchases made.
Fonts by Typekit and Monotype.