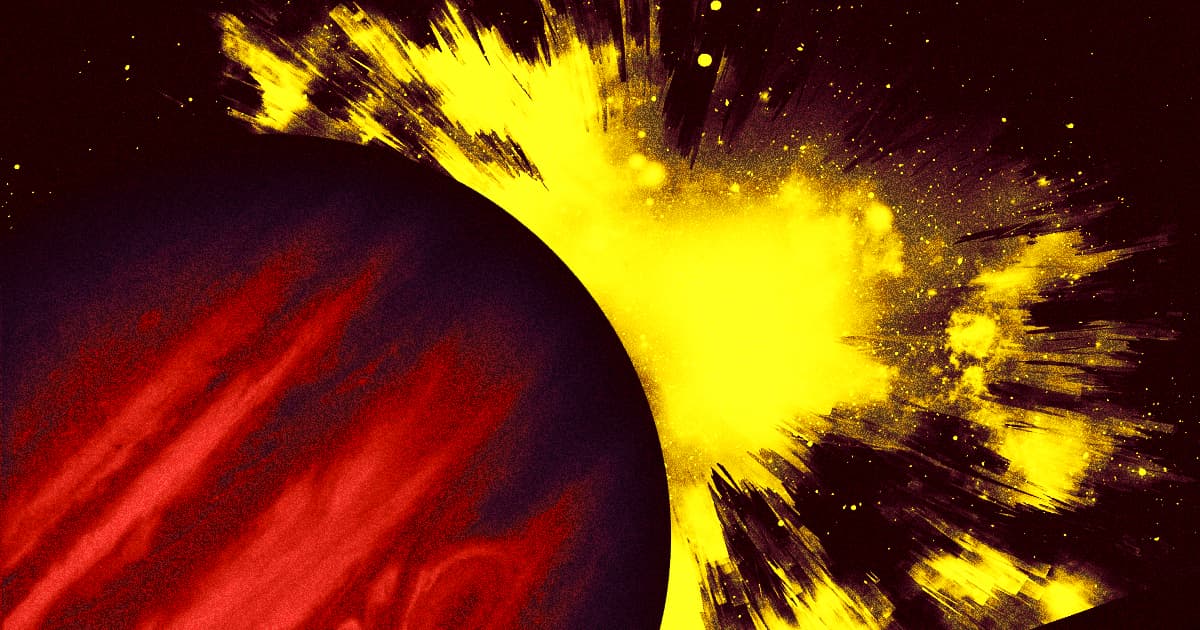 Something Big Appears to Have Just Smashed Into Jupiter

"It could only be an impact."

"It could only be an impact."

Astronomers watching Jupiter got a surprise on Monday when a large unknown object appeared to smash into the gas giant.

At the time, many amateur astronomers were watching an ongoing transit of the shadow of Io, one of Jupiter’s moons, according to SpaceWeather.com. Suddenly a "bright flash of light" appeared, German astrophotographer Harald Paleske told the site.

"It could only be an impact," he said.

Other astronomers across the world witnessed and captured images of the event as well, which was corroborated by professional astronomers as well.

Light on at Jupiter! Anyone home? This bright impact flash was spotted yesterday on the giant planet by astronomer José Luis Pereira.

Not a lot of info on the impacting object yet but its likely to be large and/or fast!

Paleske told SpaceWeather.com that the fireball was located at 106.9 degrees latitude, and +3.8 degrees longitude. His images indicate that the flash was visible for about two seconds.

The exact origin of the flash and the nature of the object that caused it is still somewhat of a mystery. However, it can be safely assumed that the fireball originated from an asteroid.

Astronomers are now on the lookout for a dark mark or other signs of disruption on the gas giant's surface — telltale signs that an asteroid did indeed collide with Jupiter.

Astronomers are no strangers to witnessing objects colliding with Jupiter in real time. In fact, NASA data analyzed in 2019 suggests that earlier in the solar system's history, Jupiter may have absorbed an entire planet.

One notable example occurred when Comet Shoemaker-Levy 9 smashed into Jupiter in July 1994, according to NASA. When that happened, it left a massive trail of debris and dark marks — and bolstered a theory that life has been able to thrive on Earth because Jupiter sucks up so many harmful asteroids that would otherwise decimate its surface.

Name Game
NASA May Still Rename James Webb Telescope Over Homophobia Controversy
Apr 4
Read More
Search for Life
Former Astronaut Suggests Specific Planet for James Webb to Search for Life
Feb 23
Read More
Jupiter Jokesters
Nitwits Claim Wrongly to Have Disproved the Existence of Jupiter
Jan 30
Read More
+Social+Newsletter
TopicsAbout UsContact Us
Copyright ©, Camden Media Inc All Rights Reserved. See our User Agreement, Privacy Policy and Data Use Policy. The material on this site may not be reproduced, distributed, transmitted, cached or otherwise used, except with prior written permission of Futurism. Articles may contain affiliate links which enable us to share in the revenue of any purchases made.
Fonts by Typekit and Monotype.