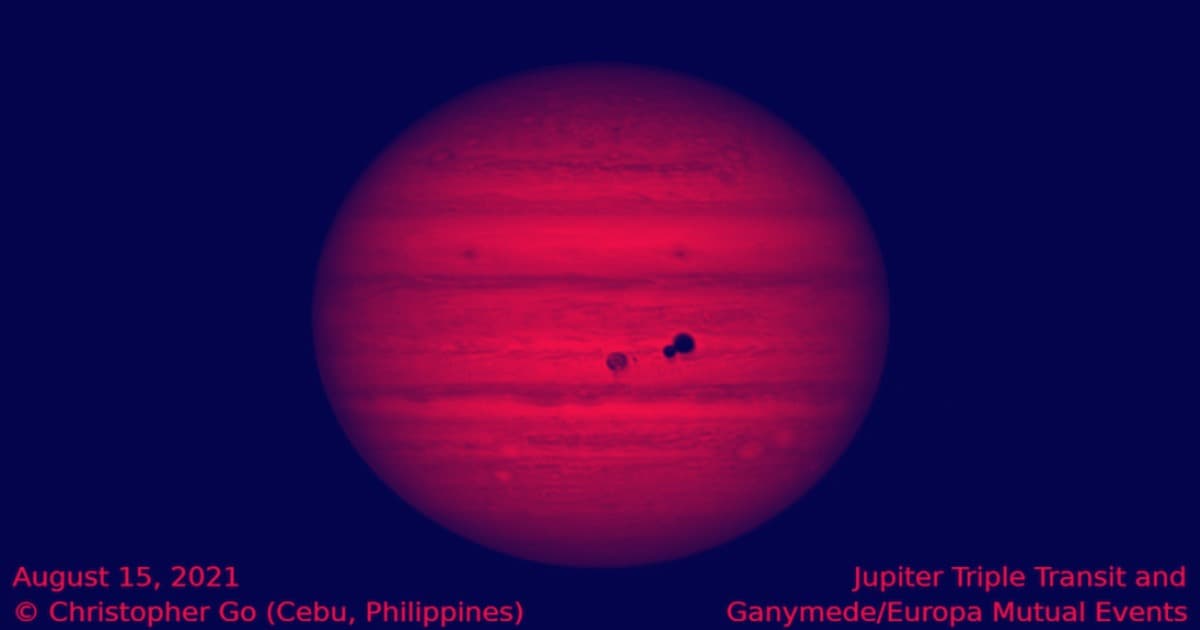 Astronomers were treated to a delightful show last week when three of Jupiter’s moons passed in front of the planet in a rare event known as a "triple transit."

The moons in question are three of Jupiter’s Galilean moons: Europa, Ganymede, and Callisto, according to The Washington Post. They were named such as they were discovered by Galleleo in 1610. The three passed in front of the planet on August 15, completing a rare triple transit in doing so.

The last triple transit occurred in 2015, while the next is slated for 2032. If you missed it, don’t worry. You can check out the gif of it below:

A stunning and rare "triple transit" of Jupiter's moons occurred last week. This occurs when all three moons simultaneously passed in front of the planet. 🌜

Partial Eclipse of the Moon

The triple transit wasn’t the only rare astronomical event to occur that day. In fact, something called "mutual events" happened as well.

It occurred when Europa passed out of Earthlings’ sightline underneath Ganymede. When the moon reappeared, Ganymede threw its shadow on Europa causing an eclipse.

"This thing is so surreal," said Christopher Go, an astronomer and photographer who captured the stunning images of the triple transit and mutual events from Cebu City, Philippines. "Ganymede is projecting a shadow toward Jupiter, but part of the shadow hit Europa."

Space enthusiasts everywhere have folks like Go to thank for capturing and archiving such amazing astronomical events. In fact, the only reason much of the world is aware of it now is because NASA featured Go’s images as their Astronomy Picture of the Day yesterday.

Name Game
NASA May Still Rename James Webb Telescope Over Homophobia Controversy
4. 4. 22
Read More
Search for Life
Former Astronaut Suggests Specific Planet for James Webb to Search for Life
2. 23. 22
Read More
Jupiter Jokesters
Nitwits Claim Wrongly to Have Disproved the Existence of Jupiter
1. 30. 22
Read More
+Social+Newsletter
TopicsAbout UsContact Us
Copyright ©, Camden Media Inc All Rights Reserved. See our User Agreement, Privacy Policy and Data Use Policy. The material on this site may not be reproduced, distributed, transmitted, cached or otherwise used, except with prior written permission of Futurism. Articles may contain affiliate links which enable us to share in the revenue of any purchases made.
Fonts by Typekit and Monotype.