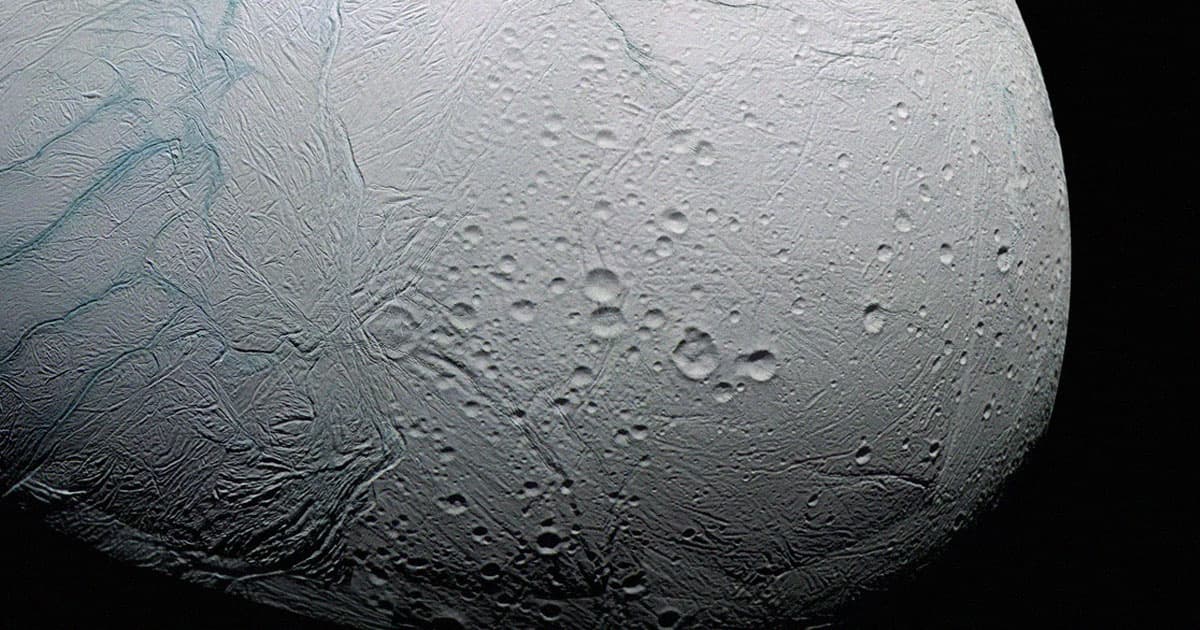 Something Weird Is Happening on Saturn's Snow-Covered Moon, Scientists Say

That's a lot of snow.

That's a lot of snow.

Saturn's tiny ice-covered moon Enceladus isn't only suspected to hold a liquid ocean beneath its icy crust — it's also covered in an astonishing amount of fuzzy, snow-like material, puzzling scientists.

According to a new study published in the journal Icarus, the tiny moon may have been far more tectonically active over time than previously thought, with snow cannon-like plumes erupting from massive icy geysers, depositing vast amounts of particles in the form of low-density regolith on its surface. Meanwhile, smaller and lighter particles are blasted into outer space, contributing to Saturn's massive rings — a fascinating portrait of a desolate alien world.

Are we really talking about snow here? The study itself refers to the layer as "regolith," while media coverage has largely used the word "snow."

"The material we measured on the surface of Enceladus was not generated from a planetary atmosphere the way snow might imply," lead author Emily Martin, planetary scientist at the National Air and Space Museum in DC, told Futurism in an email. "However, the way in which Enceladus's icy plume particles fall to the surface is reminiscent of snow and I think an appropriate analogy."

There's also a chance that Enceladus' snow isn't exactly the same as the fluffy substance found here on Earth.

Terminology aside, the scientists' conclusion could end up serving a critical role if we were to ever attempt to land a probe on Enceladus' surface, as Science Alert reports — which could certainly be worth the trip, as the moon's subsurface ocean is a prime place to look for extraterrestrial life in our solar system.

High-resolution images taken by NASA's Cassini probe back in 2017 revealed a vast number of "pit chains," which are crater-like geological features that form when material is sucked down by a void underneath, not unlike lava tubes or limestone caves.

These pits were the result of the moon's icy crust fracturing due to tugging gravitational forces, allowing loose drifts to fall into newly formed cavities underneath, the scientists suggest.

By measuring these pits, they were able to figure out that the thickness of this regolith averaged over 820 feet, with some areas reaching depths of up to 2,300 feet.

Martin and her colleagues suggest Enceladus' plumes must have been a lot more active in the past to account for the thickness of this layer of "low-density/high-porosity material," according to the paper.

In short, Enceladus' surface would likely make for one hell of a snowball fight — that is, if you can figure out how to overcome its nearly complete lack of gravity and cryogenic surface temperatures.

READ MORE: Mysteriously Deep Snow Covers The Icy Moon Enceladus, But How Did It Get There? [Science Alert]

More on Enceladus: Saturn Might Be Hiding Remains of a Secret, Massive Moon in Its Rings

Glow On
Scientists Unlock Decades-Old Mystery Behind Glow on Saturn
2. 9. 22
Read More
Under the Sea
Scientists Intrigued by Possible Signs of Life on Saturn's Moon
7. 7. 21
Read More
Water Bear Gun
Scientists Loaded Tiny Organisms Into a Gun and Shot Them At Targets
5. 19. 21
Read More
+Social+Newsletter
TopicsAbout UsContact Us
Copyright ©, Camden Media Inc All Rights Reserved. See our User Agreement, Privacy Policy and Data Use Policy. The material on this site may not be reproduced, distributed, transmitted, cached or otherwise used, except with prior written permission of Futurism. Articles may contain affiliate links which enable us to share in the revenue of any purchases made.
Fonts by Typekit and Monotype.