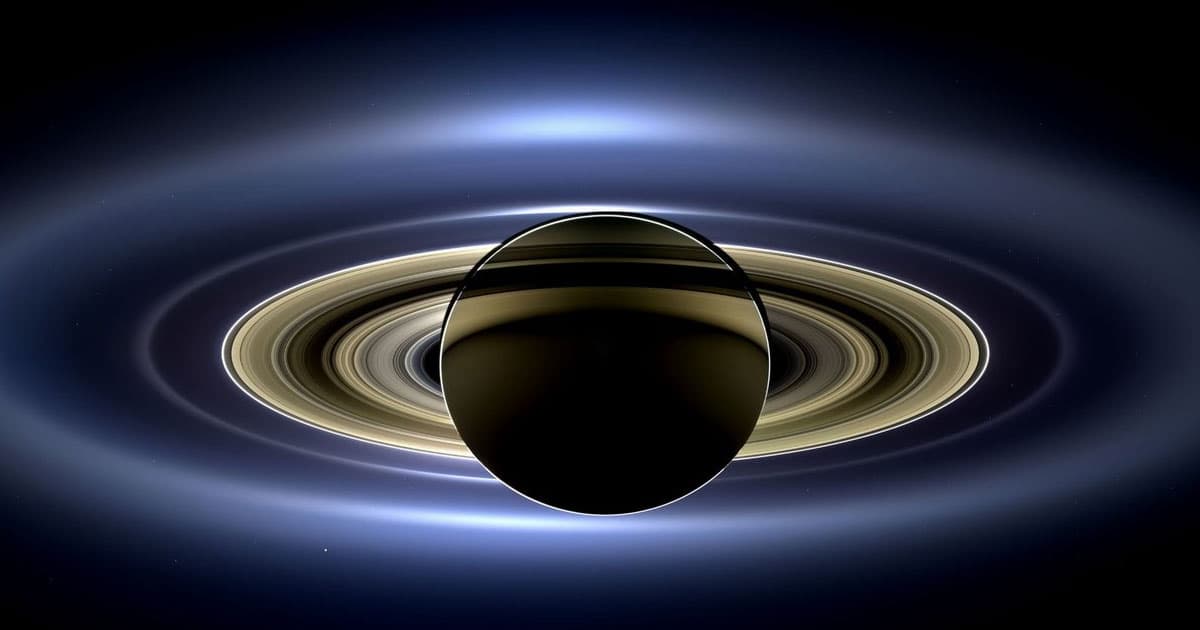 Saturn Might Be Hiding Remains of a Secret, Massive Moon in Its Rings

It's a compelling theory that could explain a lot.

It's a compelling theory that could explain a lot.

A team of astronomers at MIT suspect Saturn may be hiding the remains of an ancient moon in its rings — which could explain the planet's unusual tilt.

In a new paper published in the journal Science this week, the team suggests there may have been a sizable satellite dubbed Chrysalis orbiting the gas giant for several billion years, a tantalizing new theory that could explain why the planet is spinning at a highly unusual 26.7-degree angle.

The scientists propose that after being in Saturn's orbit for billions of years, Chrysalis got a little too close to its host planet around 160 million years ago, obliterating itself in the process. This violent event was catastrophic enough to permanently adjust its tilt.

The theory could also explain how Saturn's rings formed in the first place, with the team suggesting large amounts of icy chunks originated from the remains of Chrysalis.

"Just like a butterfly’s chrysalis, this satellite was long dormant and suddenly became active, and the rings emerged," said Jack Wisdom, professor of planetary sciences at MIT and lead author of the new study, in a statement.

To reach that conclusion, the researchers used gravitational field data collected by Cassini during its extremely close approach to model the distribution of mass inside Saturn.

According to their calculations, Chrysalis would have had to be the size of Saturn's third-largest moon Iapetus before getting torn to pieces.

"It’s a pretty good story, but like any other result, it will have to be examined by others," Wisdom said in the statement. "But it seems that this lost satellite was just a chrysalis, waiting to have its instability."

READ MORE: Saturn’s rings and tilt could be the product of an ancient, missing moon [MIT]

More on Saturn: Jupiter's Moons Accused of Sucking Up the Planet's Rings

Glow On
Scientists Unlock Decades-Old Mystery Behind Glow on Saturn
Feb 9
Read More
Under the Sea
Scientists Intrigued by Possible Signs of Life on Saturn's Moon
7. 7. 21
Read More
Moon Beam
NASA Engineer: Humans Should Consider Settling Saturn's Moon Titan
3. 16. 19
Read More
+Social+Newsletter
TopicsAbout UsContact Us
Copyright ©, Camden Media Inc All Rights Reserved. See our User Agreement, Privacy Policy and Data Use Policy. The material on this site may not be reproduced, distributed, transmitted, cached or otherwise used, except with prior written permission of Futurism. Articles may contain affiliate links which enable us to share in the revenue of any purchases made.
Fonts by Typekit and Monotype.