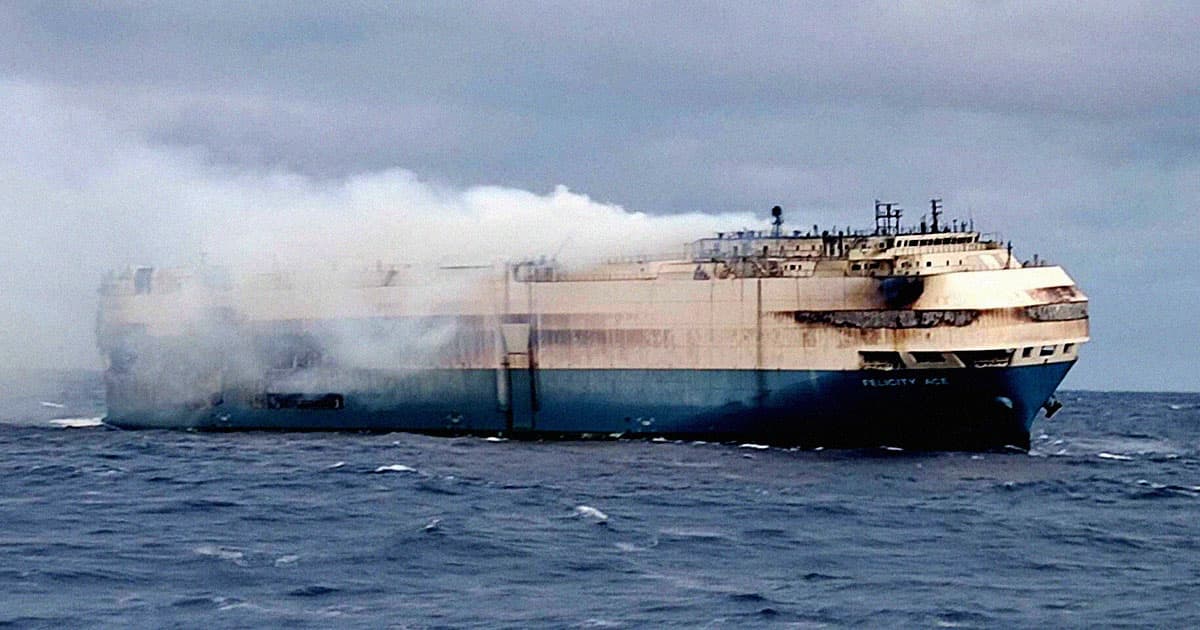 "The cars are electric and part of the fire is the batteries that are still burning."

"The cars are electric and part of the fire is the batteries that are still burning."

A giant cargo ship carrying luxury cars, including numerous Porsches, lit on fire last week and forced the crew of 22 members to evacuate in the Atlantic ocean.

And as it turns out, a “large number” of the cars are electric, which is greatly complicating firefighting efforts, The Wall Street Journal reports — though it’s still unclear if their lithium-ion batteries were the source of the fire.

“The cars are electric and part of the fire is the batteries that are still burning,” a spokesman for salvage company Royal Boskalis Westminster NV told the newspaper.

The news — yet another setback for the already ailing car industry — goes to show that transporting massive and highly flammable batteries comes with some inherent risks, a pertinent topic given the exponential rise of the EV.

The massive cargo ship, dubbed the Felicity Ace, was transporting roughly 4,000 cars, including 1,100 Porsches and 189 Bentleys, from Germany to the US. Porsche’s parent company, the Volkswagen Group, manufactures electric luxury cars including Porsche’s Taycan, the Audi e-tron, and VW’s ID.4.

But ever since the crew abandoned ship, the vessel has been adrift and on fire off the shore of the Azores islands in the Atlantic.

“The fire continues to be active, although it has diminished in intensity,” João Manuel Mendes Cabeças, an Azores port captain, told the WSJ. “The expectation is that everything or almost everything burned.”

Ocean-ready tug boats are now making their way to the Felicity Ace to pull the vessel to shore — after the raging inferno is safely extinguished.

More on EVs: White House to Install Hundreds of Thousands of EV Chargers on US Highways