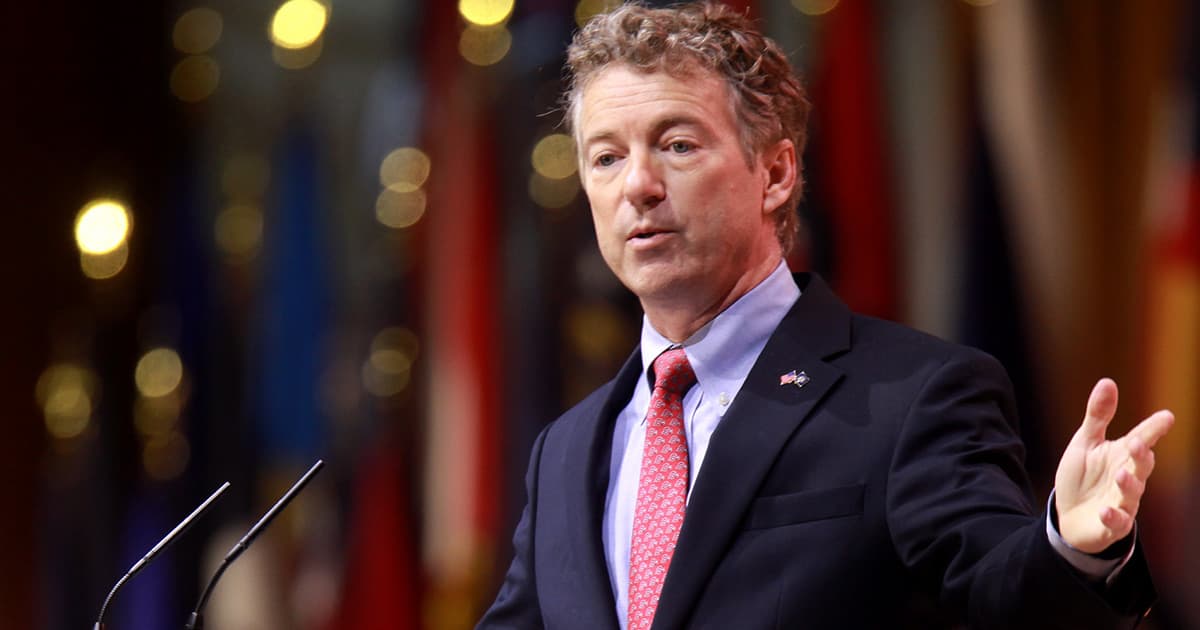 Rand Paul says humans will "likely survive for hundreds of millions of years."

Rand Paul says humans will "likely survive for hundreds of millions of years."

According to U.S. Senator Rand Paul, fears of climate change are overblown — but we should also venture out and drastically change the environments of other planets so humanity might settle them.

Paul tweeted his bizarre stance ­on Sunday, after he attempted to roast Representative Alexandria Ocasio-Cortez over her aggressive plans to fight climate change, a move which, as HuffPost reports, backfired spectacularly.

And clapbacks aside, his stance that there’s no urgent rush to try and mitigate climate change is troubling given the exhaustive mountain of evidence to the contrary.

Despite climate alarmist predictions, humans will likely survive for hundreds of millions of years into the future. In the meantime, we should begin creating atmospheres on suitable moons or planets. https://t.co/qsBtkbsNAY

In his tweet, Paul linked to a 2018 Cosmos Magazine article exploring the possibility of using bacteria to create a hospitable atmosphere on Mars.

Multiple researchers have looked into using bacteria to terraform a new home planet, but that’s a plan for the distant future at best — and not a feasible alternative to protecting and preserving Earth.

Paul also argued that “humans will likely survive for hundreds of millions of years into the future” — and whether or not that’s true, it will be much more difficult if we continue to destroy the only habitat we have.

More on terraforming: Contaminating Mars With Microbes Could Kickstart Colonization

Making Mars
NASA’s Chief Scientist Quits, Says He Has a Plan to Terraform Mars
Jan 3
Read More
Heating Up
One Space Trip Emits a Lifetime’s Worth of Carbon Footprint
12. 12. 21
Read More
Martian Magnets
Scientists Propose Jumpstarting Mars’ Magnetic Field to Make It Habitable
11. 21. 21
Read More
+Social+Newsletter
TopicsAbout UsContact Us
Copyright ©, Camden Media Inc All Rights Reserved. See our User Agreement, Privacy Policy and Data Use Policy. The material on this site may not be reproduced, distributed, transmitted, cached or otherwise used, except with prior written permission of Futurism. Fonts by Typekit and Monotype.