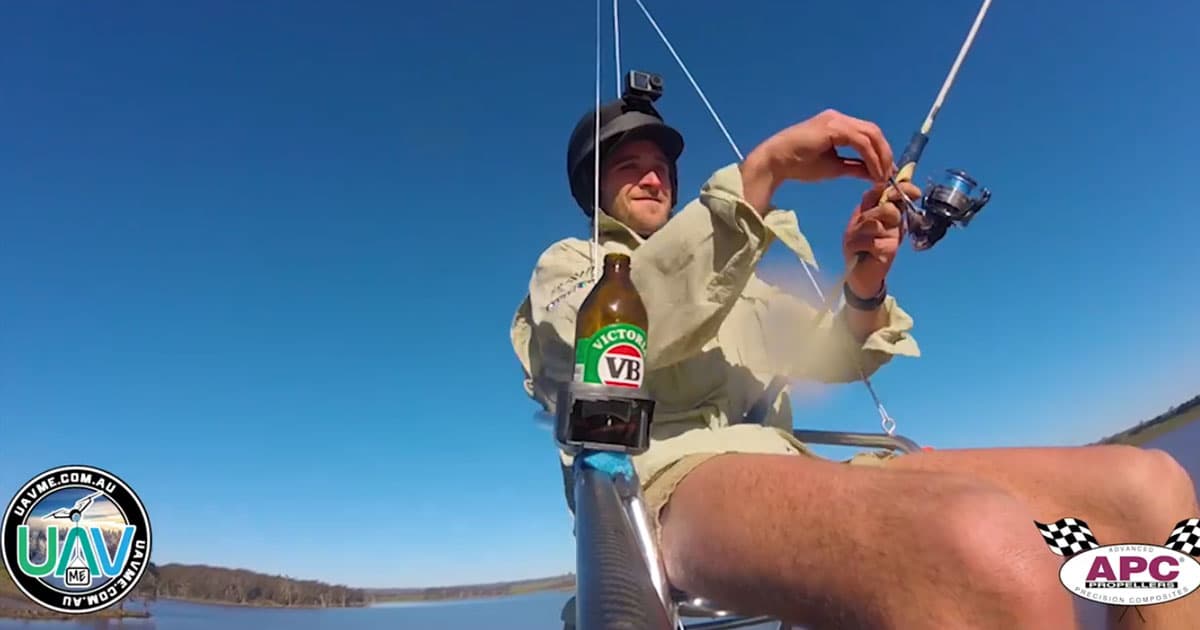 See a Man Dangle From Drone to Literally "Fly" Fish

"There's lots of things that could have gone wrong."

"There's lots of things that could have gone wrong."

An Australian man uploaded video of himself fishing, from a chair, suspended over a lake, by a drone — and the whole stunt (somehow) appears to have gone surprisingly well.

According to a story from RT, Kyneton, Victoria, fisherman Sam Foreman and his friends spent AUS$20,000 (US$13,460) building the drone, which features 12 motors, 25 batteries, and six 27-inch propellers.

They then uploaded a video of Foreman using the rig to successfully catch a fish in the Upper Coliban Reservoir to the UAV Me Facebook page.

Meanwhile in AustraliaDRONE FISHING WITH A DIFFERNCE!!!

Of course, deepfake technology has made it hard to believe any videos on the internet today — see: these convincing clips of Tom Cruise and Keanu Reeves — but that isn't stopping officials from taking the drone fishing video at face value.

Australia's Civil Aviation Safety Authority (CASA) is investigating the video, and if they decide Foreman and his cohorts violated aviation safety rules, they could force the group to pay upwards of $10,000 in fines.

"This is a first for Australia, to have a large homemade drone being used to lift someone off the ground," CASA spokesman Peter Gibson told ABC News. "It's really not a sensible thing to do in any way, shape or form; there's lots of things that could have gone wrong, someone could have been seriously injured."

READ MORE: Video of man fishing while dangling from drone under investigation by CASA [ABC News]

More on deepfakes: Someone Deepfaked Tom Cruise Into the “American Psycho” Sex Scene