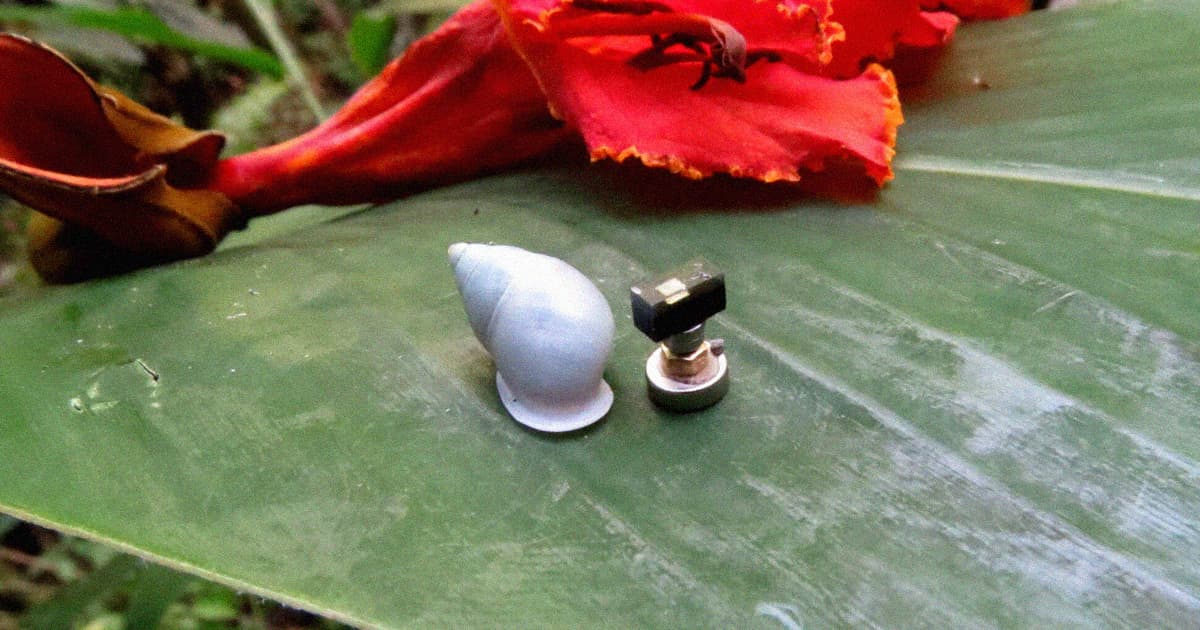 We Can Rebuild Him

They stuck tiny computers onto the snails to understand how it evaded predators.

They stuck tiny computers onto the snails to understand how it evaded predators.

Scientists from the University of Michigan took an unusual approach to wildlife conservation: turning the threatened animals into cyborgs so they could keep track of them and study how they survive.

Back in the 1970s, scientists introduced an invasive snail called the rosy wolf snail to the Society Islands in French Polynesia. What followed was a bloodbath, according to a press release on the new research, as the invasive snail eradicated nearly every native tree snail species in the area. It was a devastating loss of biodiversity, but five species managed to survive, including the Partula hyalina. Now, thanks to the cyborg study, which was published Tuesday in the journal Communications Biology, researchers have finally figured out how.

Both snails — P. hyalina and the rosy wolf snail that hunts it — are nocturnal. But the study revealed that the rosy wolf snail is more vulnerable to sunlight than the P. hyaline, allowing the latter to hang out near the edges of the forest during the day while its predator needs to retreat into the shadows, empty-handed.

To figure all of that out, the University of Michigan researchers glued a tiny computer called the Michigan Micro Mote (M3) to the rosy wolf snail's shell and used the data from its solar panels as a proxy for how much sun the snails could endure. Because the P. hyaline is protected, the scientists couldn't be as hands-on. Instead, they stuck the computer to the leaves that the snails cling to during the day.

"We were able to get data that nobody had been able to obtain," Michigan electrical engineer and computer scientist David Blaauw said in the press release. "And that's because we had a tiny computing system that was small enough to stick on a snail."

Going forward, scientists hope that the M3 might be able to help with other conservation projects — meaning more animal cyborgs might be on the way soon.

More on cyborgs: Scientists Build Tiny Camera for Beetles To Carry Around

FROM THE DEPT. OF THINGS TO BUY
Achievement Unlocked: Razer Environmental Initiative Saves 1 Million Trees
3. 24. 22
Read More
Cyborg Jellies
Scientists Want to Explore Ocean With "Cyborg Jellyfish"
1. 29. 20
Read More
Oops
Google's Demo of Upcoming AI Shows It Making Huge Factual Mistake
4:14 PM
Read More
+Social+Newsletter
TopicsAbout UsContact Us
Copyright ©, Camden Media Inc All Rights Reserved. See our User Agreement, Privacy Policy and Data Use Policy. The material on this site may not be reproduced, distributed, transmitted, cached or otherwise used, except with prior written permission of Futurism. Articles may contain affiliate links which enable us to share in the revenue of any purchases made.
Fonts by Typekit and Monotype.