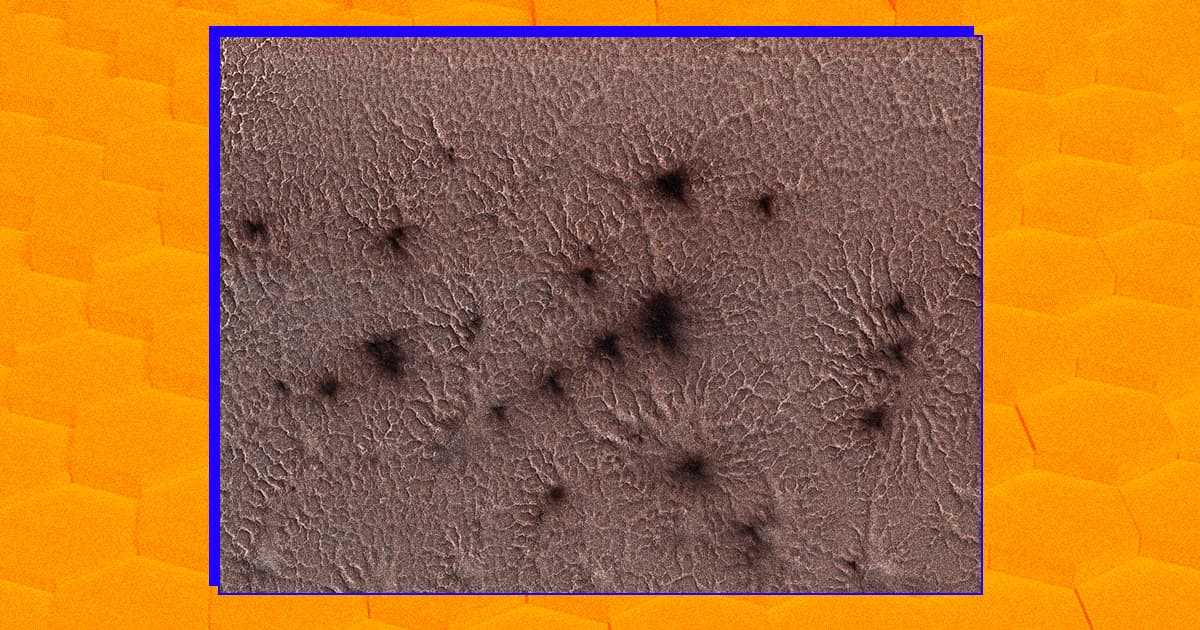 We regret to inform you that giant spiders don't actually live on Mars.

We regret to inform you that giant spiders don't actually live on Mars.

For decades, scientists have been baffled by bizarre formations on Mars' south pole that look like gigantic spiders.

That's not to say that astronomers were concerned that future Martian outposts would be attacked by giant alien arthropods, but the unusual geologic formations still eluded explanation for years, Live Science reports. Now, a team of scientists from the UK seems to have figured it out, thanks to a hunk of dry ice, a pile of dirt, and a machine that can recreate the Martian atmosphere here on Earth.

Researchers have hypothesized since as early as 2003 that the 3,300-foot "spiders" had something to do with Mars' carbon-rich ice sublimating, or turning directly from a solid into a gas, but had no way to test it out, Live Science reports.

But now, the UK researchers were able to create smaller versions of the formations in a lab by pressing dry ice against warmer sediment, according to research published last month in the journal Scientific Reports. When they did so in an artificial Mars-like atmosphere, the ice sublimated and plumed outward, carving the leg-like trenches in the dirt.

Mystery solved! Aside from confirming what made Mars' spiders, the fact that the experimental Mars-like conditions created the same formations as on the real Mars suggests that scientists now have a powerful tool for studying Martian phenomena without needing to actually travel there.

"This research presents the first set of empirical evidence for a surface process that is thought to modify the polar landscape on Mars," Open University planetary scientist and lead study author Lauren McKeown said in a press release. "The experiments show directly that the spider patterns we observe on Mars from orbit can be carved by the direct conversion of dry ice from solid to gas."

More on Mars: Study: Ancient Mars Was Covered in Ice Sheets, Not Rivers