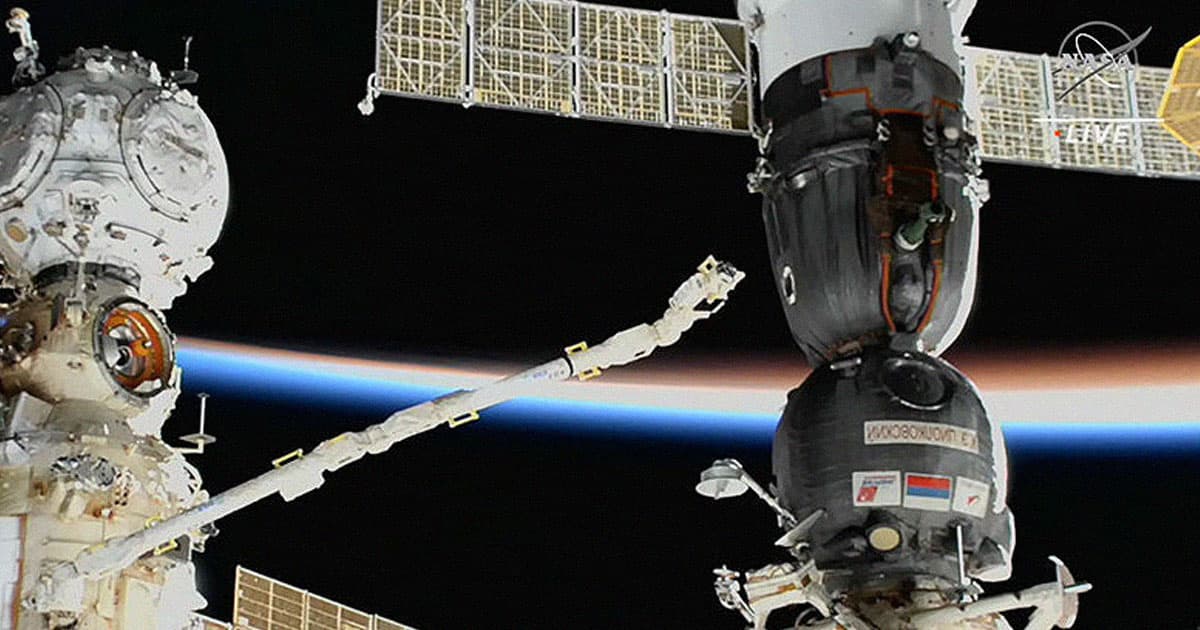 A Russian Soyuz spacecraft, currently docked to the International Space Station and tentatively scheduled to return three astronauts to Earth, sprung a leak last week and sprayed a massive mist of coolant into outer space.

The incident forced officials at Russia's space agency Roscosmos to look for ways to cool the capsule, which reportedly heated up to a sweltering 122 degrees Fahrenheit as a result.

Now, a recent inspection using the Canadarm2, a long manipulator arm attached to the outside of the space station, has revealed a 0.8 millimeter hole that appears to have caused the leak, Russian state-owned media network TASS reports.

Officials believe micrometeorites are behind the damage — but the exact cause, like the plan for getting the astronauts home, has yet to be confirmed.

Roscosmos head Yury Borisov described the situation as "not very pleasant," according to TASS, but denied that the spacecraft ever reached 122 degrees Fahrenheit.

According to Roscosmos, the Soyuz capsule's habitation module is currently sitting at a balmy-but-livable 86 degrees Fahrenheit, while the equipment compartment is around 104 degrees.

The Russian space agency also said that the temperatures are within acceptable limits for cosmonauts.

But that doesn't mean the three astronauts — cosmonauts Sergey Prokopyev, Dmitri Petelin, and NASA astronaut Frank Rubio, who were meant to return on board the leaky spacecraft — still have a ride home.

As Ars Technica reports, Roscosmos is now trying to figure out whether the capsule is ready to return or if a fresh Soyuz, which had been meant to carry three new crew members to the ISS in March, will need to be launched as a makeshift return flight — an expensive fix.

For now, we'll have to wait and see what Roscosmos and NASA decide to do next.

More on the incident: Russia Alarmed as Spacecraft Heats Up After Coolant Sprays Into Space

Don't let the door hit you
Elon Musk Lobs Casual Space Station Burn at Moscow
7. 28. 22
Read More
Sad ROSS
Russia's New Space Station Gets Sadder the More We Hear About It
7. 27. 22
Read More
Buh Bye
Russia Says It's Definitely Quitting the ISS But Doesn't Say When Exactly
7. 26. 22
Read More
+Social+Newsletter
TopicsAbout UsContact Us
Copyright ©, Camden Media Inc All Rights Reserved. See our User Agreement, Privacy Policy and Data Use Policy. The material on this site may not be reproduced, distributed, transmitted, cached or otherwise used, except with prior written permission of Futurism. Articles may contain affiliate links which enable us to share in the revenue of any purchases made.
Fonts by Typekit and Monotype.