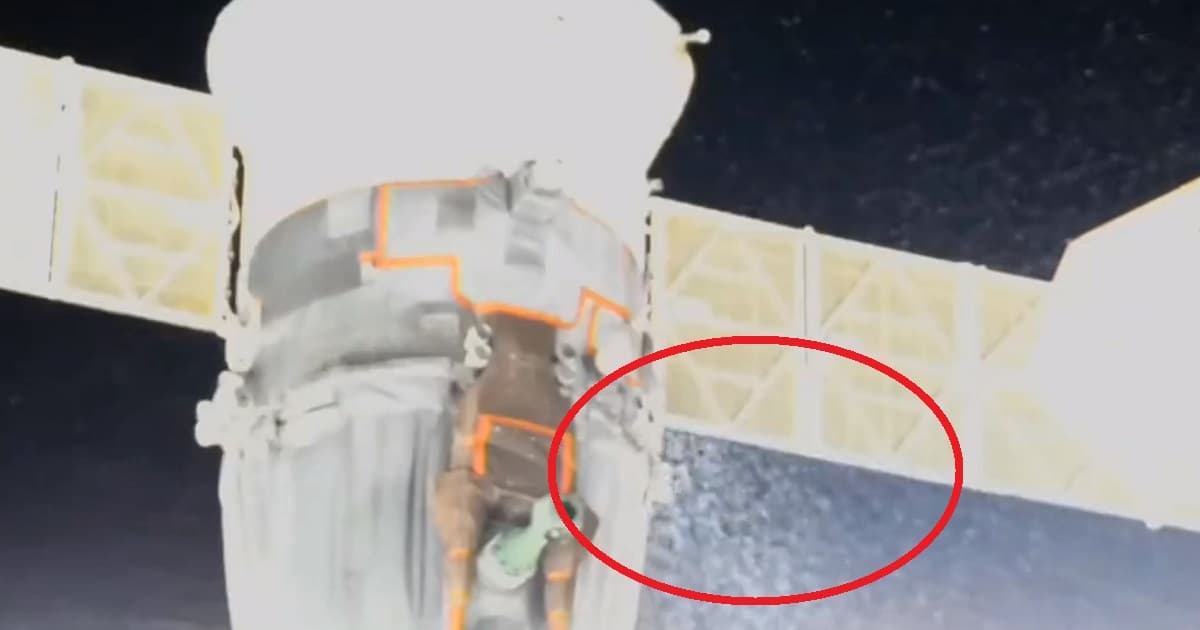 As Russian cosmonauts on the International Space Station geared up for a scheduled spacewalk on Wednesday night, flight controllers told them to stand by as they noticed something was terribly wrong: a Roscosmos Soyuz spacecraft, docked to station, was leaking uncontrollably.

The event was captured on the NASA TV broadcast, with agency spokesperson Rob Navias describing the leak as "fairly significant." Videos show coolant — likely ammonia — continuously spraying out of the Soyuz and floating into space, a mesmerizing sight that could almost be described as cinematic if it weren't so real.

Fortunately, as of now, it's believed that neither the ISS nor the astronauts are in any danger as engineers and control try to diagnose the leakage, which is limited solely to the Soyuz. If the craft is too damaged to safely return to Earth, though, it would mean the station's crew is now missing an escape craft in the case of emergency.

Problem with Soyuz MS-22 on the ISS right now! pic.twitter.com/V4Ymvnn2D1

According to Ars Technica senior space editor Eric Berger, the leakage was "never controlled" and only stopped once "all the coolant was gone," he wrote in a tweet. That does not sound good.

And as Berger observed in Ars Technica, the ISS may be safe with the astronauts sitting tight for now, but the Soyuz's potentially compromised condition does spell trouble for the three astronauts scheduled to fly back to Earth aboard it in the spring, including both Russian cosmonauts Sergey Prokopyev and Dmitry Petelin and NASA astronaut Frank Rubio.

Still, it's probably too early to come to any definitive conclusions. At the end of the NASA TV livestream, Navias stated that "no decisions have been made regarding the integrity of the Soyuz MS-22 or what the next course of action will be," as quoted by CNN.

As of Thursday morning, it still appears that no final decision has been made.

However, it does appear that the cause of leakage has been tentatively determined.

Sergei Krikalev, director of crewed space flight programs at Roscosmos said in a statement that the leakage was likely caused by a stray micrometeorite strike, the Associated Press reports.

Krikalev added that it could affect the Soyuz's coolant system performance but reiterated that it does not endanger the crew.

For now, initial assessments of the Soyuz by Russian specialists indicate that the Soyuz is flyable, Berger tweeted, and that NASA will be using the robotic arm Canadarm2 to further assess the damage.

More on the ISS: New Details Emerge About the "Peculiar Odor" on International Space Station

Don't let the door hit you
Elon Musk Lobs Casual Space Station Burn at Moscow
7. 28. 22
Read More
Sad ROSS
Russia's New Space Station Gets Sadder the More We Hear About It
7. 27. 22
Read More
Buh Bye
Russia Says It's Definitely Quitting the ISS But Doesn't Say When Exactly
7. 26. 22
Read More
+Social+Newsletter
TopicsAbout UsContact Us
Copyright ©, Camden Media Inc All Rights Reserved. See our User Agreement, Privacy Policy and Data Use Policy. The material on this site may not be reproduced, distributed, transmitted, cached or otherwise used, except with prior written permission of Futurism. Articles may contain affiliate links which enable us to share in the revenue of any purchases made.
Fonts by Typekit and Monotype.