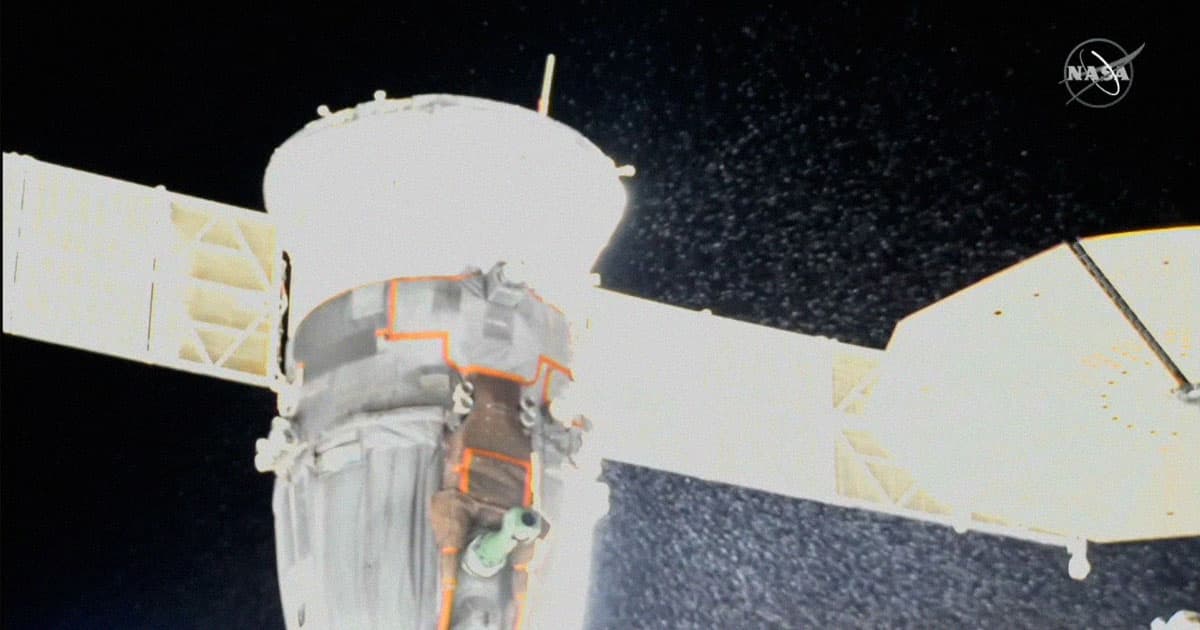 Russia Alarmed as Spacecraft Heats Up After Coolant Sprays Into Space

Unfortunately, it's docked to the ISS.

Unfortunately, it's docked to the ISS.

A Russian Soyuz spacecraft,currently docked to the International Space Station, is rapidly heating up after it sprayed copious amounts of coolant into space earlier this week.

The event, which was captured on a NASA livestream, showed significant amounts of liquid vaporizing, a dramatic incident that had ground control worried at the time and likely moreso now.

According to Russian state-owned news agency RIA Novosti, the Soyuz capsule has already heated up to an appreciable 122 degrees Fahrenheit, with Russian space agency specialists desperately looking for ways to cool it back down.

We still aren't entirely sure why the capsule, which carried two cosmonauts and NASA astronaut Frank Rubio to the space station back in September, started leaking.

Officials believe a micrometeorite strike may have nicked a hole in the coolant line, but investigators have yet to confirm the actual cause.

"The cause of the leak in Soyuz MS-22 could be a micrometeoroid hitting the ship's radiator," Sergei Krikalev, head of human spaceflight at Roscosmos, said in a statement posted to Telegram.

Fortunately, no astronauts were in any danger due to the leak, and the ISS hasn't suffered any damage, either.

However, the incident did force Moscow ground control to cancel a spacewalk originally scheduled for Wednesday evening. Roscosmos cosmonauts Sergey Prokopyev and Dmitri Petelin were meant to venture outside of the station to move a radiator from Russia's Rassvet module, where the leaking Soyuz capsule is docked, over to the recently installed Nauka lab module.

It was a close call. The two cosmonauts were already wearing their spacesuits and were inside a depressurized airlock when the incident started.

It's far from the first time Russia's aging Soyuz capsules have caused trouble for the station. On two separate occasions, the modules have accidentally fired their thrusters and caused the entire ISS to spin out of control.

READ MORE: Micrometeoroid strike could be cause of Russian spacecraft leak - official [Reuters]

More on the incident: Russian Spacecraft Docked to ISS Sprays Fluid Into Space