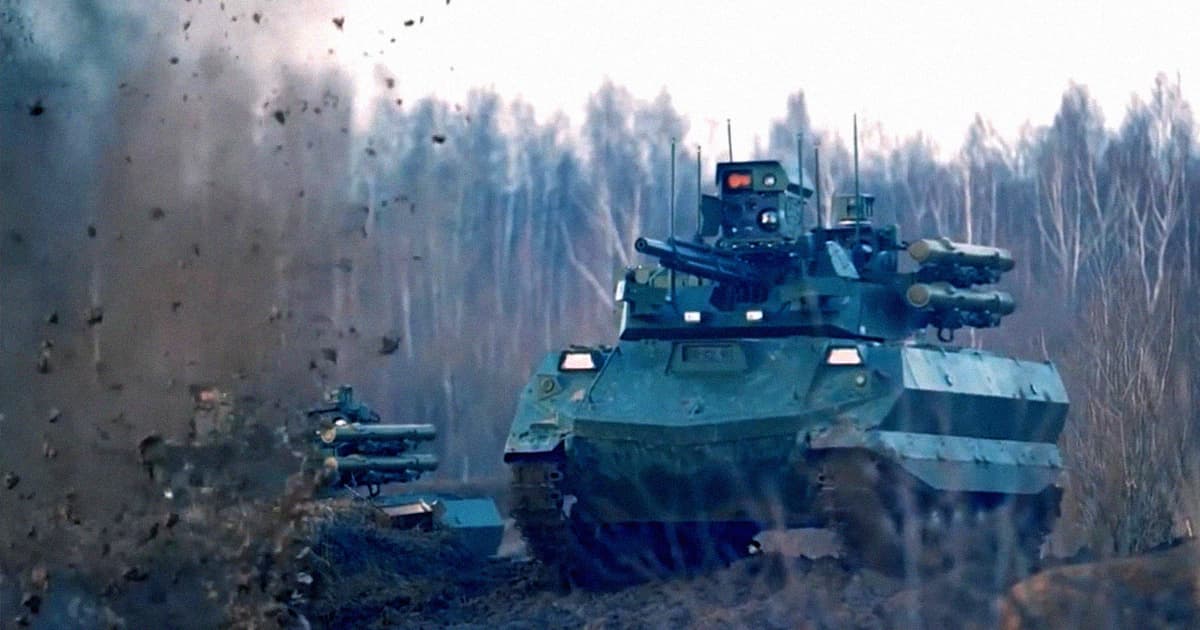 The Russian Army is going ahead, despite "shortcomings" identified during tests in Syria.

The Russian Army is going ahead, despite "shortcomings" identified during tests in Syria.

The remotely piloted tank, called Uran-9, can be and be outfitted with 30mm automatic gun turrets, flamethrowers, and anti-tank missiles — yet another sign we're headed towards a future in which automated weapons systems will be duking it out on the battlefield.

And the Russian Army is racing ahead with the deployment.

"As Chief of the Army Main Staff Vasily Tonkoshurov reported to the defense minister, the first unit with strike robots will be set up in the Russian Armed Forces to operate five Uran-9 robotic systems or 20 combat vehicles," Russia’s Defense Ministry announced on Friday, as quoted by TASS.

But they won't be up front and center during the next exchange of fire, with the ministry saying that an "experimental unit is being established on the premises of one of the Defense Ministry’s scientific research centers."

The Uran-9 tanks will be joined by many other closely related robots in the future that will hold a range of different jobs. "We expect to continue expanding the range of robots, which, of course, are already in demand in the military today," Russia’s defense minister Sergei Shoigu said last week, as quoted by Express. "These will be heavy robots (for mine clearance) and everything related to the further development of scouts, radiation and chemical reconnaissance robots."

Early 2018 deployments of the Uran-9 robots in Syria went far from smoothly, as The National Interest reported at the time. The tanks did not perform up to their required standards in various combat operations according to officials, with Defence Blog noting issues with the vehicles' suspension and even "unstable operation" of the 30mm automatic cannon.

The robot's manufacturer, Kalashnikov Concern, claims it was able to smooth over some of these issues since 2018. Vladimir Dmitriev, general director of the company, did however admit that "shortcomings were identified during the tests in Syria" during last week's announcement, according to Express.

"In particular, the issues of control, reduced mobility, and unsatisfactory military intelligence and surveillance functions had been considered by engineers and were rectified," he added.

The emergence of unmanned combat vehicles raises plenty of ethical concerns — and Russia isn't the first nation to take advantage of them. The US military, for instance, has long made use of unmanned aerial systems.