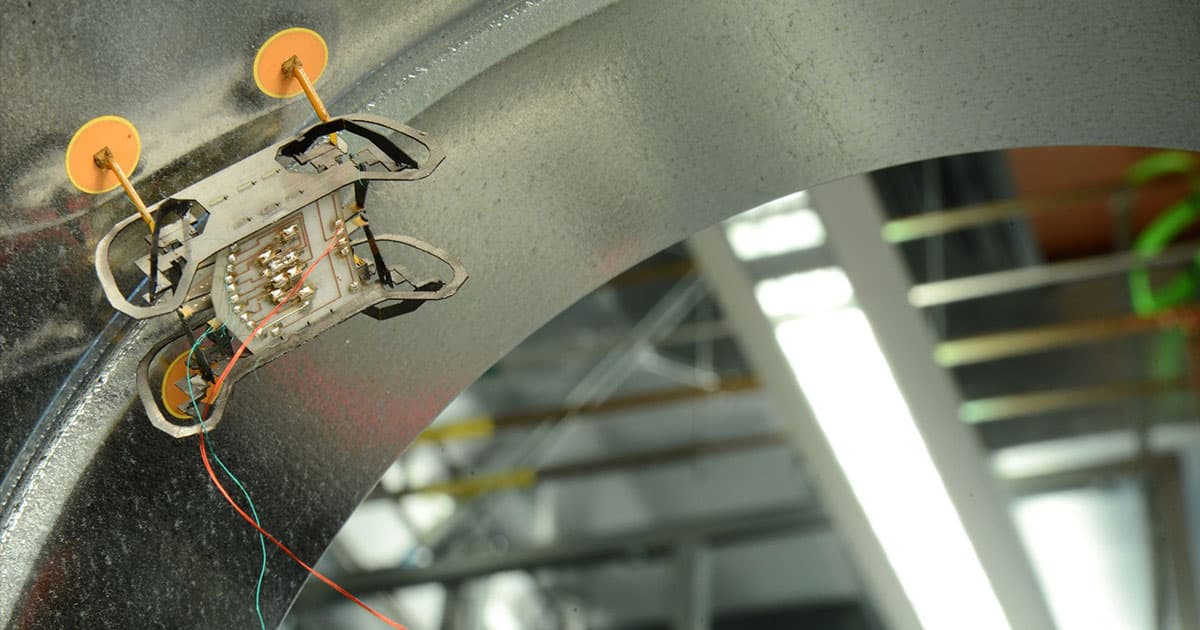 It uses electricity to stick to surfaces.

It uses electricity to stick to surfaces.

Rolls-Royce really wants to get robots into its jet engines.

In July, the U.K. engineering firm unveiled the tiny, cockroach-like robot it designed to crawl into engines’ hard-to-reach areas. The goal: give mechanics a way to investigate issues without going through the complicated process of taking an engine apart.

Now, a team from Harvard has produced another microbot for Rolls-Royce — one more like a lizard than an insect — and it’s another fascinating concept about how bots can navigate hard-to-access areas on behalf of human engineers.

The Harvard team calls its robot HAMR-E, which stands for Harvard Ambulatory Micro-Robot with Electroadhesion. The little machine is able to climb on surfaces in any direction, even upside down — just like a gecko.

According to a paper published Thursday in the journal Science Robotics, the bot’s four flexible foot pads include copper electrodes that generate an electrostatic force as it walks across a conductive surface. Turn a pad’s electric field on, and it sticks to the surface. Turn it off, and the pad releases.

In order to stick to a surface upside down, the robot needs to have three pads turned on, so the researchers programmed it to use a special walking pattern in which no more than one pad is lifted at any point in time. Specially designed joints modeled after origami allow the bot’s ankles to rotate freely, too, which enables it to maintain its orientation while moving in any direction.

In testing, HAMR-E was able to take more than one hundred consecutive steps and even managed to navigate a curved section of a jet engine while upside down. Next, the team plans to explore giving the robot the ability to carry electronics or sensors it could use to inspect its environment. They also want to research ways to allow the microbot to walk on non-conductive surfaces.

“Now that these robots can explore in three dimensions instead of just moving back and forth on a flat surface, there’s a whole new world that they can move around in and engage with,” researcher Sébastien de Rivaz said in a news release. “They could one day enable non-invasive inspection of hard-to-reach areas of large machines, saving companies time and money and making those machines safer.”

READ MORE: Robots With Sticky Feet Can Climb up, Down, and All Around [Wyss Institute]