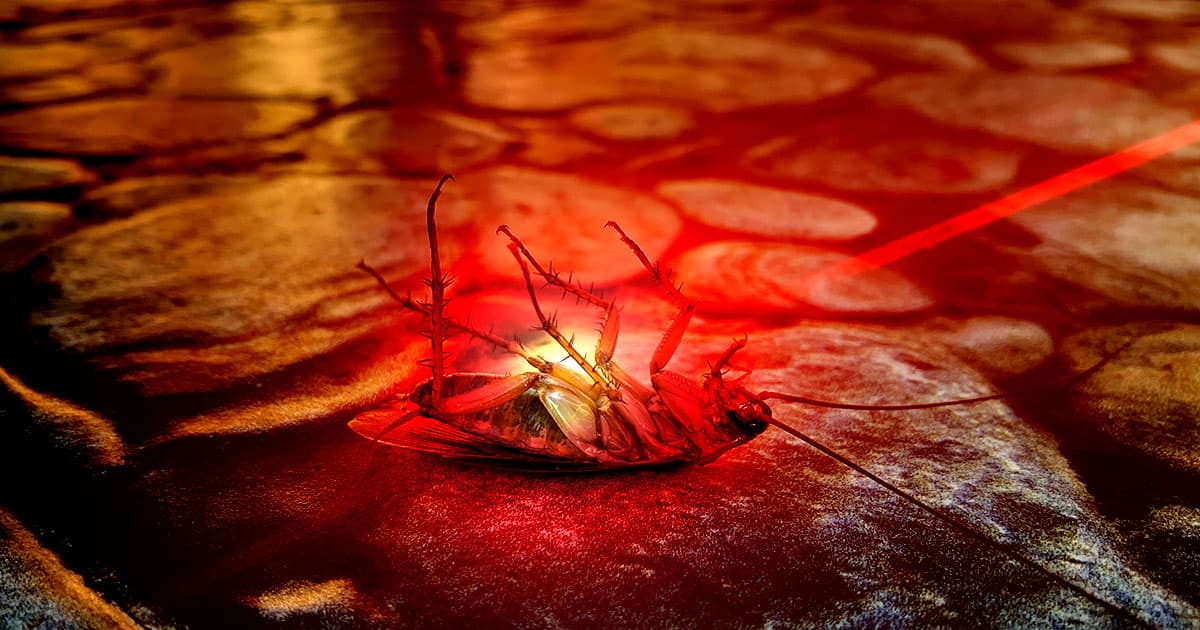 Researchers at Heriot-Watt University in Edinburgh have constructed an AI-powered robot trained to kill pesky cockroaches with a deadly laser.

And we can't help but wonder: why couldn't they have thought of such a machine sooner?

If the idea of targeting pests with a killer light beam makes you a little squeamish, we understand. But the device wasn't just made for the sake of seeking revenge on annoying critters — according to New Scientist, the machine's inventors believe that the device could provide an inexpensive, environmentally sound replacement for toxin-laden insecticides.

While the engineers behind the machine say that their invention could be used to target a variety of unwanted bugs, they believe roaches are the ideal test subject.

"If you can kill them," Ildar Rakhmatulin, the project's lead, told New Scientist, "you can kill any pests."

Here's how it works. The device, which is comprised of a tiny computer, two cameras, and a 1,600 milliwatt laser, uses "machine vision" to hunt its prey.

While trials thus far have been promising — the device can only barely keep up with the roaches— the researchers say there's some room for improvement. Next steps, they told New Scientist, are training the robot to hit the insects' specific body parts, specifically their abdomens, in order to ensure their defeat. Better safe than sorry.

There are plenty of use cases. "If we talk about industrial or agricultural applications, it's a very serious possibility," Rakhmatulin told New Scientist. "It's very cheap, even compared to pesticides, because laser prices are not so high."

Sadly, though, in case you wanted to install one in your own home, Rakhmatulin would advise against it.

"It'll never be absolutely safe," the scientist told the magazine, explaining that lasers can cause serious eye damage. "It's my opinion that it cannot be used for home applications."

More on cockroaches: Inventor of Cyborg Cockroach Says It Will Only Be Used for Good

Thanks, but No Thanks
Oakland Police Want to Arm Robots With Shotguns, Because We Live in a Dystopian Nightmare
Oct 17
Read More
Unholy Diver
Terrifying Humanoid Diving Robot With "Human" Sense of Touch Explores Shipwreck
Aug 1
Read More
Dragonfire Energy
The UK's New "Dragonfire" Laser Weapon Is Weirdly Steampunk
5. 1. 19
Read More
+Social+Newsletter
TopicsAbout UsContact Us
Copyright ©, Camden Media Inc All Rights Reserved. See our User Agreement, Privacy Policy and Data Use Policy. The material on this site may not be reproduced, distributed, transmitted, cached or otherwise used, except with prior written permission of Futurism. Articles may contain affiliate links which enable us to share in the revenue of any purchases made.
Fonts by Typekit and Monotype.