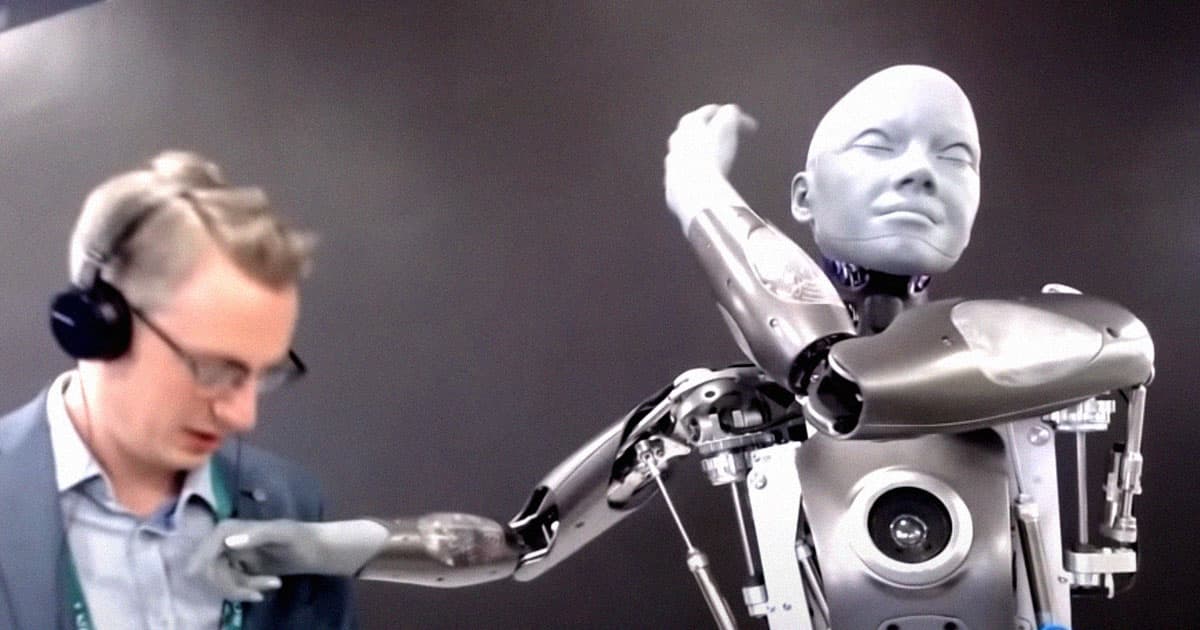 That Robot With the Super Creepy Facial Expressions Is Back, and Yikes

Yep, it's still as weird as ever.

Yep, it's still as weird as ever.

UK-based robotics company Engineered Arts made a huge splash last month with a teaser video of its humanoid robot, with many eerily uncanny expressions, which went viral on social media.

Even the likes of Elon Musk commented on the video, noting just how unsettling it was to watch the robot's perfectly executed impressions.

Now, we finally get to see more of the robot in action. Engineered Arts took its robot called Ameca — it's a "she" according to its owners, by the way — to this year's CES convention in Las Vegas, and had it sit down for an interview with CNET.

The experience was just as uncanny as we expected, and also made it clear that the extraordinary bot is not the result of CGI trickery.

Ameca really looks like she was yanked straight out of a sci-fi movie.

"We've all seen it in the movies, we've all seen 'I, Robot' and 'AI Artificial Intelligence,'" Morgan Roe, Engineered Arts' director of operations, told CNET via Zoom. "And suddenly, that's real."

While Ameca herself didn't talk during the interview, the humanoid robot appeared to react to what Roe was saying, as if a somewhat over-expressive human of flesh and blood was actually standing next to him.

Roe also explained that Ameca wasn't meant to visually mimic an actual human being, noting that the team intentionally "pulled it backwards out of the uncanny valley" by giving it a deliberately robotic look.

So what will Ameca actually do?

"This is mainly probably service robotics," Roe told CNET, noting that it would take "say ten to 20 years" for Ameca to mingle with real humans.

Roe also explained how the robot can track people's faces using two cameras in each of its eyes.

It's a beautiful example of humanoid robotics being taken to its logical conclusion, and an impressive feat of engineering that shows just how far the technology has come.

Just don't stare into Ameca's eyes for too long or you might just get fooled into thinking she's real.

READ MORE: Ameca the robot is more human (and haunting) than I ever imagined [CNET]

Thanks, but No Thanks
Oakland Police Want to Arm Robots With Shotguns, Because We Live in a Dystopian Nightmare
10. 17. 22
Read More
Quacks Like a Duck
Watching Elon Musk's Robot Back to Back With Boston Dynamics Is... Something
10. 4. 22
Read More
Unholy Diver
Terrifying Humanoid Diving Robot With "Human" Sense of Touch Explores Shipwreck
8. 1. 22
Read More
+Social+Newsletter
TopicsAbout UsContact Us
Copyright ©, Camden Media Inc All Rights Reserved. See our User Agreement, Privacy Policy and Data Use Policy. The material on this site may not be reproduced, distributed, transmitted, cached or otherwise used, except with prior written permission of Futurism. Articles may contain affiliate links which enable us to share in the revenue of any purchases made.
Fonts by Typekit and Monotype.