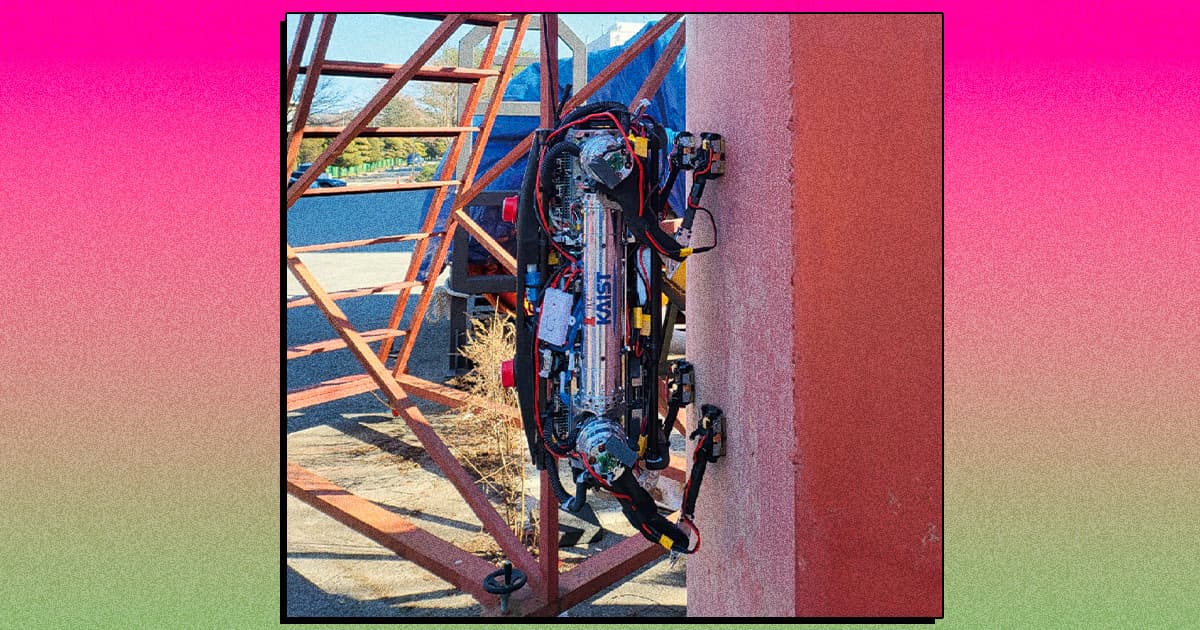 We're Deeply Alarmed By This Robodog That Can Climb Up Walls

No escaping one now!

No escaping one now!

There's not a lot of burgeoning tech out there that so often vacillates between being cute and absolutely horrifying as robodogs. In a further baffling twist, they're now able to, uh, climb walls like giant bugs.

Yes, you heard that right. Researchers at the Korea Advanced Institute of Science and Technology have developed a four-legged robot that can climb up iron and steel walls and ceilings, as described a study published in the journal Science Robotics on Wednesday. They call it MARVEL, short for Magnetically Adhesive Robot for Versatile and Expeditious Locomotion, and it only weighs about 18 pounds and isn't any larger than a tiny puppy at roughly 13 in long.

MARVEL isn't the first robot that can climb walls, but unlike most others, it makes use of magnetic legs rather than wheels, grippers, suction cups, or propellers.

It's also seriously dexterous, its designers say, adroitly navigating curved surfaces like that of a rusted metal storage tank, in part thanks to its innovative feet that use electro-magnets and a cutting edge, rubber-like smart material known as magnetorheological elastomers.

That kind of skill with its feet will be a key selling point of the robot, as its creators uphold its potential to be used in industrial environments to inspect bridges, ships, and buildings, especially at high heights that would be dangerous for humans.

It's also speedy. During testing, MARVEL was able to climb up a curved storage tank at a maximum speed of just over one foot per second, avoiding protrusions and stepping over obstacles like four inch gaps along the way.

On easier surfaces like flat walls and ceilings, the robot climbed as fast as 1.6 feet per second and over two feet per second, respectively. According to the researchers, that "demonstrates the fastest vertical and inverted walking speed" of climbing robots so far.

However, its creators note that it still has a ways to go before it can consistently tackle irregular or steeply curved surfaces. But getting MARVEL this far, and tackling a curved surface at all, is already an achievement of its own.

More on robots: Boston Dynamics Sues Competitor That Put a Gun on Its Robodog