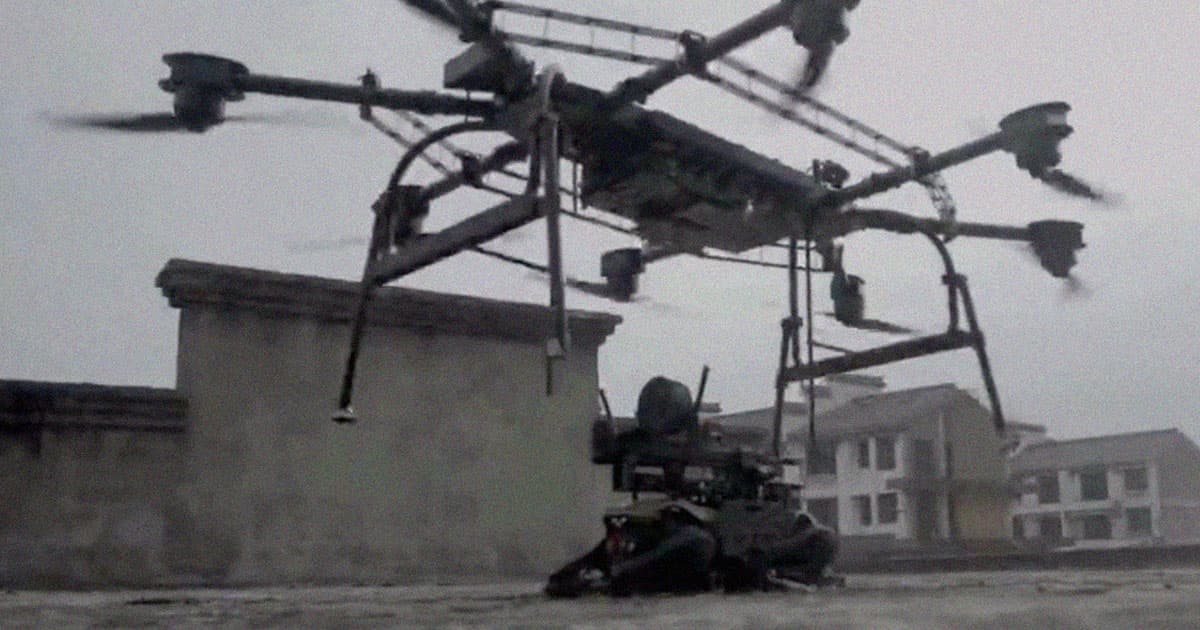 Described as "war dogs" that "descend from the sky."

Described as "war dogs" that "descend from the sky."

A video has gone viral of a large drone dropping off a gun-wielding robot dog, a terrifying vision of what the future of warfare and policing could soon look like.

The footage shows a sizable octocopter drone dropping off its armed payload on a rooftop in an urban area. The robodog then springs to life and stretches its legs.

The robot appears to be carrying a modified, semiautomatic assault rifle, which has been the service rifle for the People's Liberation Army and paramilitary agencies in China since 1995.

The clip was shared by an account called Kestrel Defense Blood-Wing on Chinese social media. According to a rough Google translation of the account's description of the video, "war dogs" that "descend from the sky" can be "directly inserted into the weak links behind the enemy to carry out surprise attacks," be delivered "to the top of enemy buildings," or provide fire suppression.

The Future is Now. pic.twitter.com/tRKnKa8xvp

Needless to say, it's a controversial use of the technology. Just this week, Boston Dynamics, maker of the popular Spot Mini robodog, which bears a striking resemblance to the robot in the video, announced a pledge to never weaponize any of its robots.

That hasn't stopped others from arming quadruped robots. Several US defense contractors have shown off prototypes of four-legged robots carrying large weapons.

And last year, a Russian tinkerer strapped a submachine gun to a Chinese robodog, firing off rounds after rounds in an alarming video.

It's unclear if we'll ever see robot dogs being air dropped from the sky via drones — but, as the video demonstrates, the technology definitely already exists.

Quacks Like a Duck
Watching Elon Musk's Robot Back to Back With Boston Dynamics Is... Something
Oct 4
Read More
Quantum Supremacy
US Sanctions Chinese Quantum Computing Firms for... Reasons
11. 29. 21
Read More
Wait What
FCC Commissioner Says He's Afraid of Robodogs and We Can't Tell If He's Joking
10. 31. 21
Read More
+Social+Newsletter
TopicsAbout UsContact Us
Copyright ©, Camden Media Inc All Rights Reserved. See our User Agreement, Privacy Policy and Data Use Policy. The material on this site may not be reproduced, distributed, transmitted, cached or otherwise used, except with prior written permission of Futurism. Articles may contain affiliate links which enable us to share in the revenue of any purchases made.
Fonts by Typekit and Monotype.