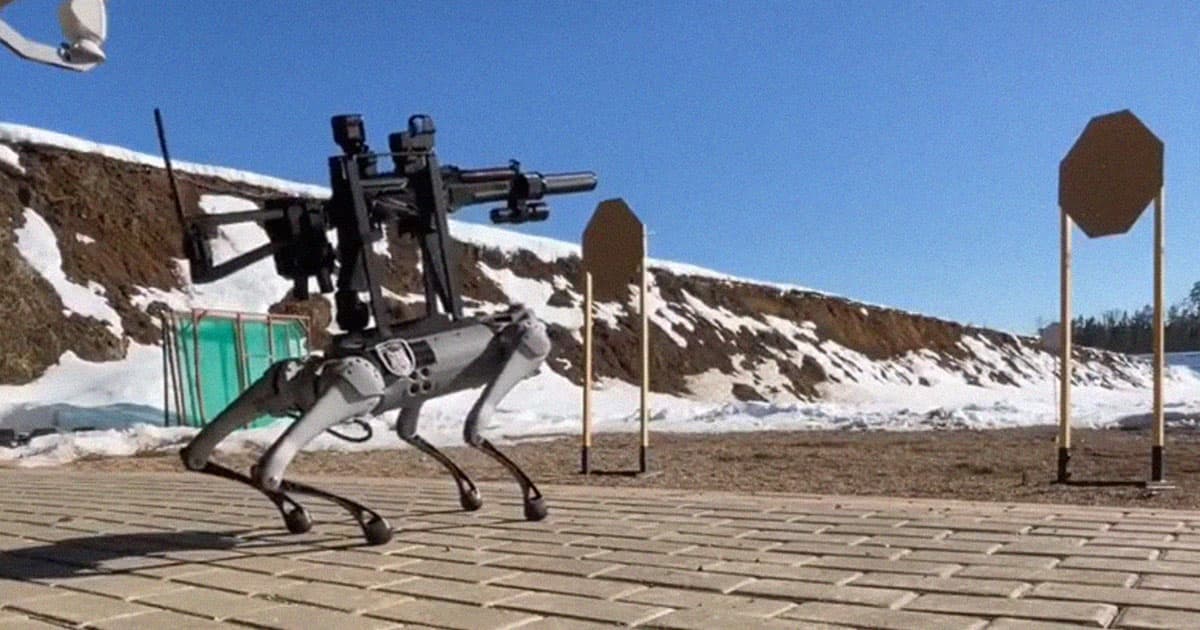 Alarming video went viral this week of a robot dog blasting off round after round with submachine gun.

The minute-and-a-half clip has already accumulated more than five million views on Twitter, and it's not hard to see why it's morbidly fascinating. It shows a silver, four-legged dog robot prancing around some outdoor brick flooring and pointing the gun toward the open area beyond. The bot fires multiple times, the recoil nearly knocking it off balance.

All the people who laughed off the “worrywarts” years ago for freaking out about the Funny Dancing Robot Dogs (tm) should be forced to watch this video once a day for the remainder of the year. pic.twitter.com/WBIrlGah3w

As Vice sleuthed out, the robodog in question is a cheap model built by UnitreeYusu and the weapon is most likely a PP-19 Vityaz.

Vice tracked the dog and gun to a Russian businessman who builds hoverbikes. The conclusion is that the guy is just a tech enthusiast who likes to go to the shooting range and built a weird gun-enabled bot for fun. In other words, it doesn't seem like he's actively planning a war.

There's really no denying the fear caused by the ominous sound of robodog feet followed by gunshots, but it's not the worst of its kind by a long shot. There totally are military contractors building robodogs with guns. Those are surely better built than the bot in the clip, which seemed unable to shoot accurately because it couldn't handle the recoil.

In other words, the viral robodog with a gun might be scary — but what the professionals are cooking up is almost certainly worse.

Diner Drama
People Furious at Robot Serving Pancakes at Denny's
11. 28. 21
Read More
Mini-Brain in the Cell Membrane
This Startup's Computer Chips Are Powered by Human Neurons
4. 1. 20
Read More
Robot Violence
YouTube Accidentally Removed Robot Battle Videos for "Animal Cruelty"
8. 20. 19
Read More
+Social+Newsletter
TopicsAbout UsContact Us
Copyright ©, Camden Media Inc All Rights Reserved. See our User Agreement, Privacy Policy and Data Use Policy. The material on this site may not be reproduced, distributed, transmitted, cached or otherwise used, except with prior written permission of Futurism. Articles may contain affiliate links which enable us to share in the revenue of any purchases made.
Fonts by Typekit and Monotype.