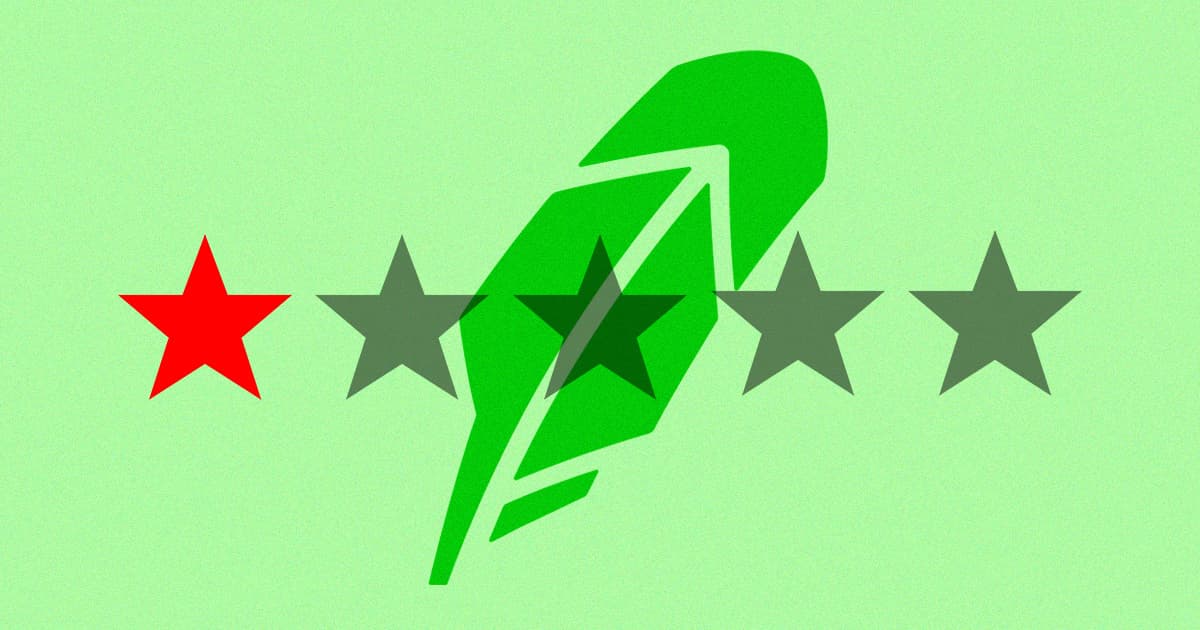 Robinhood Is Down to 1/5 Stars on Google Play

Once again, the now-infamous stock trading app Robinhood finds itself with an utterly abysmal rating on the Google Play Store.

And this time, Google isn't going to save it, a company spokesperson told The Verge. Robinhood has become profoundly unpopular as of late, especially after it restricted users from buying shares in companies like GameStop and AMC in response to the Wall Street Bets fiasco. Now, negative reviews are flooding in for all sorts of issues, and the app's reputation seems all but irredeemably tanked.

At press time, an almost-comical majority of the reviews on Google's Play Store rate Robinhood one out of five stars, bringing it to an average rating of just 1.1/5.

This already happened last week in the wake of Robinhood's Wall Street Bets restrictions. That time, Google stepped in and removed 100,000 negative reviews, deeming them to be a coordinated effort to lower the app's rating and thus against company policy.

This time, though, Google's staying out of it.

"Google Play’s app review systems are designed to provide a genuine and trustworthy view of an app’s user experience, and we take action on any inauthentic or coordinated activity aimed at artificially raising or lowering an app’s overall score," a Google spokesperson told The Verge. "To be clear, this is not done to shield an app from negative reviews, but to help protect app developers from things like coordinated review bombing and to safeguard our systems from being artificially manipulated."

READ MORE: Robinhood plummets back down to a one-star rating on Google Play [The Verge]

"Don't Be Evil"
Google Refuses to Pull Website Responsible for Scores of Suicides
12. 10. 21
Read More
Oh, Billy
Google Debuts Dystopic 3D Prison-Style Video Chat: Project Starline
5. 19. 21
Read More
Brands We Love
This Website Makes It Easy To Find The Best Investment For Your Money
10. 2. 20
Read More
+Social+Newsletter
TopicsAbout UsContact Us
Copyright ©, Camden Media Inc All Rights Reserved. See our User Agreement, Privacy Policy and Data Use Policy. The material on this site may not be reproduced, distributed, transmitted, cached or otherwise used, except with prior written permission of Futurism. Fonts by Typekit and Monotype.