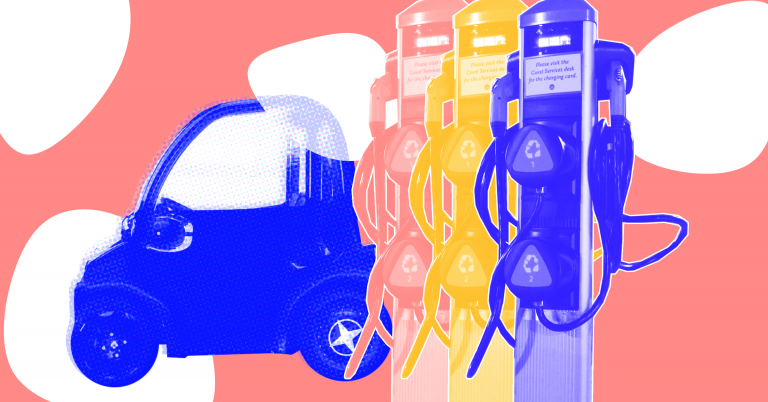 Bold New Idea: Recharge Electric Cars by Filling Them at the Pump

Electric cars are great — until you run down the battery and have to stop and charge them for a few hours.

That's why, according to NBC News, certain electric vehicle advocates are extremely excited about so-called "refillable batteries" — lithium ion cells which, when the electrolyte that powers them gets depleted, can be refilled with freshly-charged liquid instead of getting charged in-situ. The result: an electric car that can be refilled at a pump.

Some proponents of the technology, which is technically called a "flow battery," have even suggested that existing filling stations could be retrofitted to charge, dispense and accept electrolyte instead of gasoline.

"You drive 300 miles, drain your tank and pump in new [liquid] — as long as it would take to fill your car with gasoline — and drive off," said John Cushman, a researcher at Purdue who's working on liquid battery technology, in an interview with NBC.

There are still major technical hurdles to overcome before flow batteries are practical, experts cautioned NBC. And another factor, strangely, might be the consumer momentum around the idea that an electric car is something you can drive home and charge yourself.

"If it means going back to the typical fuel supplier and maintenance paradigm, it’s going to be a tougher sell than ‘plug in at home’ traditional EVs," Scott Greene, an electric transportation advocate in Chicago, told NBC.

More on electric cars: Electric Cars May Be Cheaper Than Gas Guzzlers in 7 Years — If People Actually Buy Them

Remember Donald?
Donald Trump Goes on Bizarre Rant Against Electric Cars
Sep 6
Read More
Piercing The Hype
If Graphene Batteries Do Everything Scientists Say, They Could Be a Gamechanger
11. 16. 20
Read More
Doc Ock Was Here
A White-Hot Molten Silicon "Sun" Could Power 100,000 Homes
12. 7. 18
Read More
+Social+Newsletter
TopicsAbout UsContact Us
Copyright ©, Camden Media Inc All Rights Reserved. See our User Agreement, Privacy Policy and Data Use Policy. The material on this site may not be reproduced, distributed, transmitted, cached or otherwise used, except with prior written permission of Futurism. Articles may contain affiliate links which enable us to share in the revenue of any purchases made.
Fonts by Typekit and Monotype.