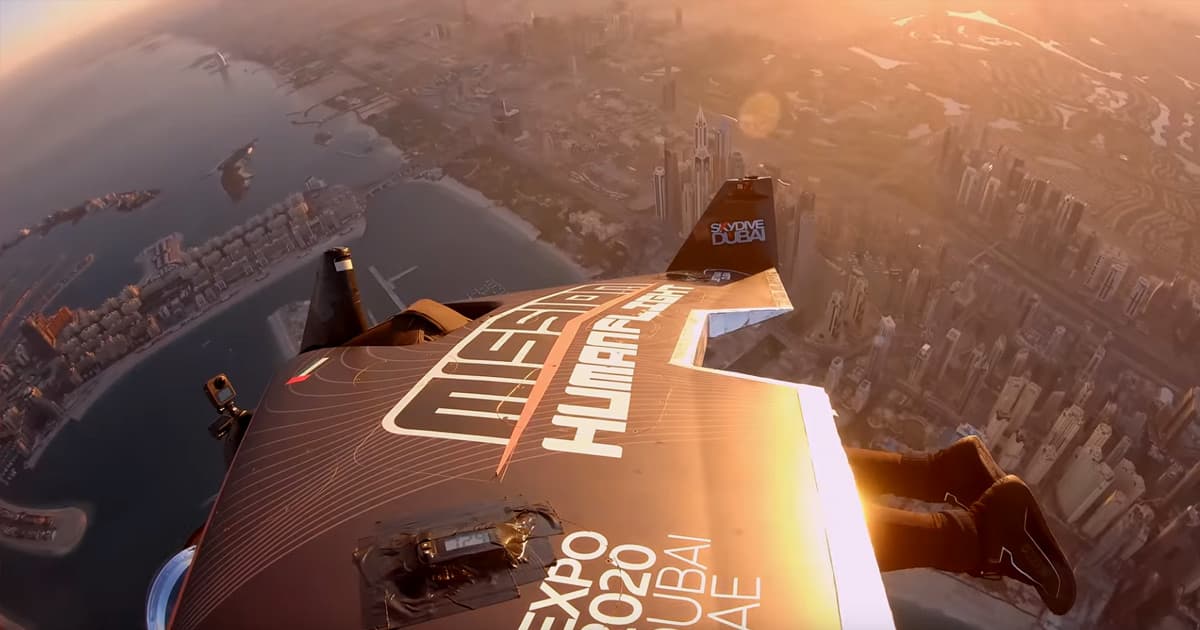 And I Think It's Gonna Be A Long Long Time

Jet-powered suit pilot Vince Reffet just took off from the ground in Dubai reaching a height of 100 meters (328 feet) in just eight seconds. Just 22 seconds later, he made it to a staggering 1000 meters (3280 feet). His average speed: 130 knots, equivalent to almost 150 mph.

At 1,800 meters (almost 6,000 feet), Reffet performed a roll and a loop before opening his parachute, safely landing on the ground below.

"It is the first time that a Jetman Dubai pilot could combine hovering safely at a limited altitude and flying aerobatics at high altitude in the same flight," XDubai, the company behind the stunt, wrote in the video description.

"Controlled from the ground by the human body, the equipment enables Jetman Dubai to reach speeds of 400kmh, as well as hovering, changing direction and performing loops," reads the caption.

Reffet joins the likes of Swiss real-life "Iron Man" Yves Rossy, who recently was filmed hovering above Geneva lake in Switzerland using his own jet-powered suit.

In November, a different real-life "Iron Man," British inventor and daredevil Richard Browning, set his own speed record while flying his own take on the jetsuit —albeit missing a giant rear wing — reaching a blistering 136.891 kilometers per hour (85.06 miles per hour).

READ MORE: Iron Man dreams are closer to becoming a reality thanks to this new Jetman Dubai video [The Verge]

More on jetsuits: Watch a Jet Wing Pilot “Jetman” Hover Over a Lake

Get Ready for Takeoff. You Can Finally Buy a Real-Life Jetpack
11. 11. 16
Read More
Dubai is Buying its Firefighters JetPacks to Battle Blazes on Skyscrapers
11. 25. 15
Read More
Science Fiction meets Science Fact: A Real Life Iron Man Suit
11. 3. 13
Read More
+Social+Newsletter
TopicsAbout UsContact Us
Copyright ©, Camden Media Inc All Rights Reserved. See our User Agreement, Privacy Policy and Data Use Policy. The material on this site may not be reproduced, distributed, transmitted, cached or otherwise used, except with prior written permission of Futurism. Articles may contain affiliate links which enable us to share in the revenue of any purchases made.
Fonts by Typekit and Monotype.