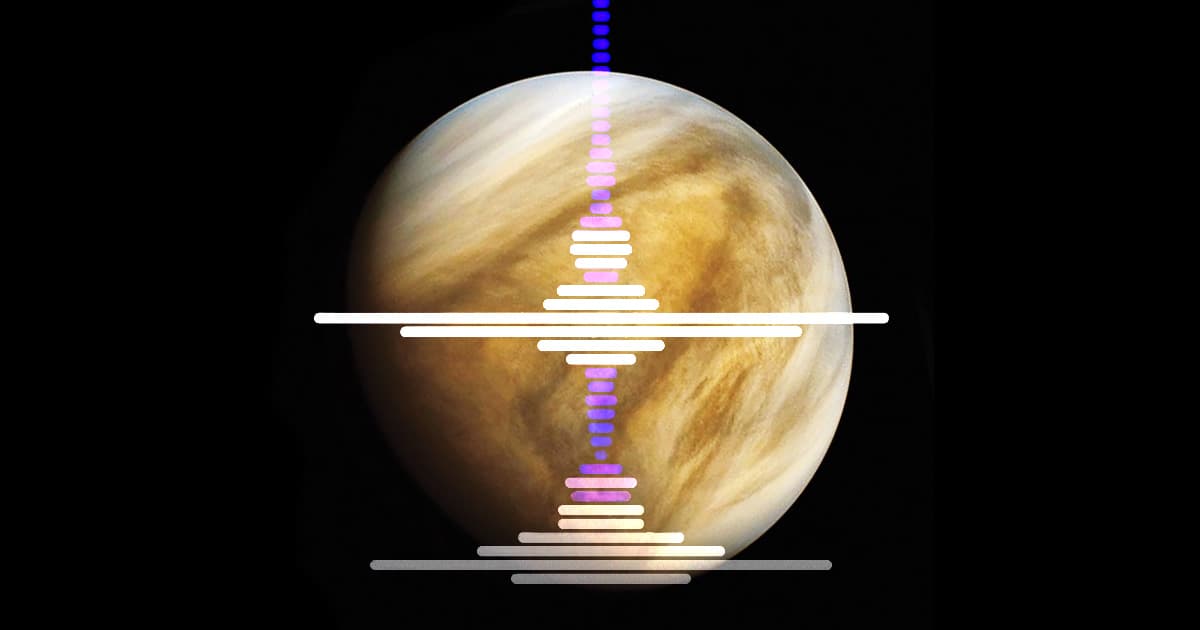 Listen to the strange radio signals emanating from Venus.

Listen to the strange radio signals emanating from Venus.

In July 2020, NASA's Parker Solar Probe got extremely close to Venus. So close, in fact, that it was able to pick up natural radio signals emanating from the planet's ionosphere, the region of the upper atmosphere that gets blasted by the Sun's radiation.

Now, scientists at NASA have turned the radio signals into sound. The result is a futuristic mishmash of alien bleeps and bloops.

To be clear, the radio emissions wouldn't be audible in the vacuum of space. The frequencies also had to be transposed significantly to the human range of hearing. But the recording does have a spooky, sci-fi sound — and could provide valuable new insight into our planetary neighbor.

Scientists are hoping to use the signals, which were picked up by the probe's FIELDS instrument, to understand how Venus became a hellhole of scorching temperatures as we know it today.

While the Parker Solar Probe's main objective was to observe the Sun's outer corona, the small spacecraft came within about 500 miles of Venus during a flyby last summer.

Thanks to data collected during the flight, scientists were able to figure out that solar activity in the Venusian ionosphere appears to grow stronger and weaker as the Sun goes through its solar cycle.

The Sun's solar cycle is an 11-year process in which solar activity, including coronal mass ejections, first rises and then drops, before restarting.

Scientists were able to compare the data collected by Parker last summer to the last available data on the Venusian ionosphere, gathered by the Pioneer Venus Orbiter almost 30 years ago.

It's a stark reminder that Venus is still drastically different than Earth, despite the two planets' surprisingly similar size and internal structures.

Into Darkness
Inside NASA's Bold Proposal to Probe the Mysteries of Dark Matter
3. 11. 22
Read More
Life on Venus
MIT Scientists Say Life May Have Been Detected on Venus After All
12. 21. 21
Read More
Martian Ammonia
NASA Rover Detects Organic Molecules on the Surface of Mars
11. 2. 21
Read More
+Social+Newsletter
TopicsAbout UsContact Us
Copyright ©, Camden Media Inc All Rights Reserved. See our User Agreement, Privacy Policy and Data Use Policy. The material on this site may not be reproduced, distributed, transmitted, cached or otherwise used, except with prior written permission of Futurism. Articles may contain affiliate links which enable us to share in the revenue of any purchases made.
Fonts by Typekit and Monotype.