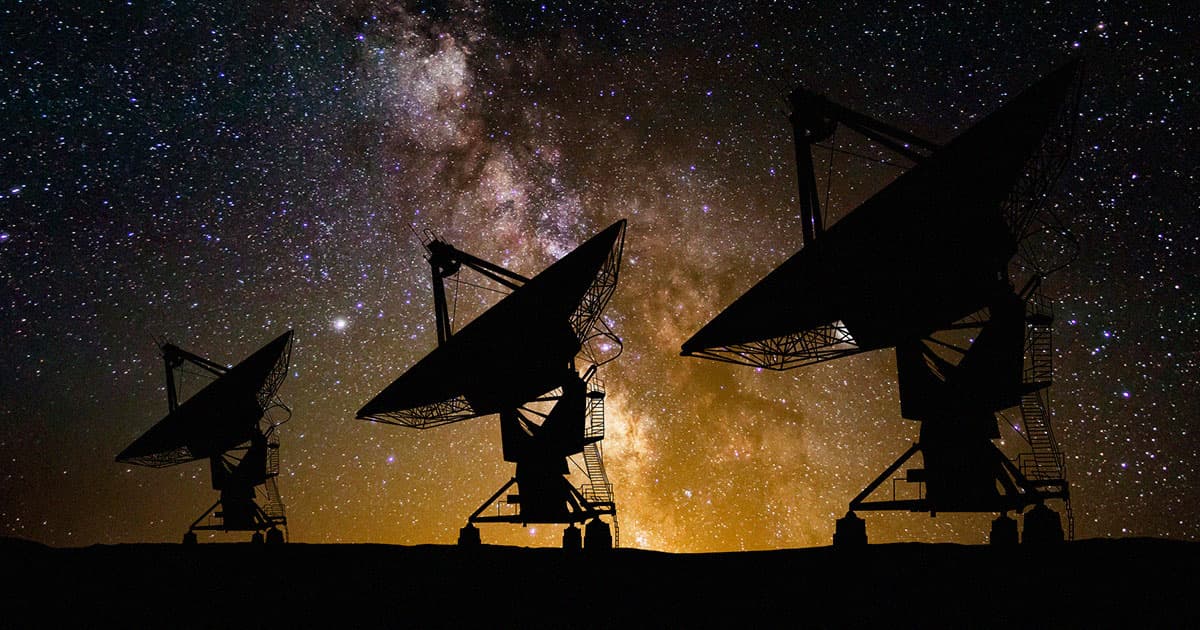 An international team of researchers have detected radio signals originating from an extremely distant galaxy, using the Giant Metrewave Radio Telescope in India.

The discovery marks the first time we've ever been able to detect these kinds of signals, believed to have been produced by atomic hydrogen in a star-forming galaxy, over such an immense distance — 8.8 billion years to travel to Earth, to be precise.

It's especially noteworthy as atomic hydrogen is the basic fuel that drives the formation of stars, meaning that the research could help us understand how stars form in galaxies billions of light-years away.

The astronomers took advantage of gravitational lensing, the phenomenon in which a massive body located between the source and the observer, such as a galaxy, bends light being emitted by distant source.

"A galaxy emits different kinds of radio signals," said Arnab Chakraborty, post-doc researcher at McGill University, and lead author of a new study published in the journal Monthly Notices of the Royal Astronomical Society, in a statement. "Until now, it’s only been possible to capture this particular signal from a galaxy nearby, limiting our knowledge to those galaxies closer to Earth."

"But thanks to the help of a naturally occurring phenomenon called gravitational lensing, we can capture a faint signal from a record-breaking distance," Chakraborty said.

"This will help us understand the composition of galaxies at much greater distances from Earth," he added.

The researchers hope that their results could lead to new ways of studying distant galaxies with existing low-frequency radio telescopes, which could be key to unlocking the mysteries of how the cosmos evolved over the life of the universe.

Astronomers Are Using Artificial Intelligence to Search for Gravitational Lenses
10. 25. 17
Read More
Planet 9 Probably Isn't an Exoplanet, After All
9. 8. 17
Read More
Astronomers Catch A Rare Glimpse of A Young Supermassive Star
8. 24. 16
Read More
+Social+Newsletter
TopicsAbout UsContact Us
Copyright ©, Camden Media Inc All Rights Reserved. See our User Agreement, Privacy Policy and Data Use Policy. The material on this site may not be reproduced, distributed, transmitted, cached or otherwise used, except with prior written permission of Futurism. Articles may contain affiliate links which enable us to share in the revenue of any purchases made.
Fonts by Typekit and Monotype.