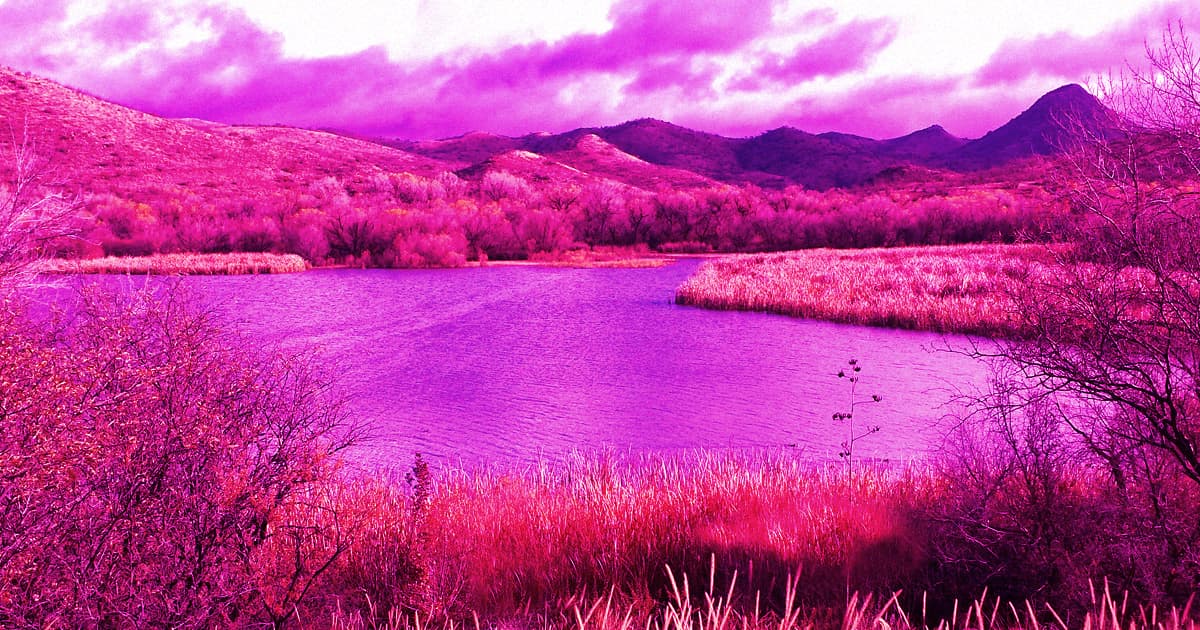 It's not supposed to be that color.

It's not supposed to be that color.

A lagoon in the southern Patagonia region of Argentina has turned a strikingly bright shade of pink, Agence France-Presse reports, the result of chemicals being dumped by a nearby plant.

The Trelew industrial park nearby uses sodium sulfite, an anti-bacterial, to preserve prawns for export. Sodium-sulfite runoff from the plant is now contaminating the Chubut river that flows into the Corfo lagoon, according to AFP, in yet another example of processing plants using natural waterways as their dumping grounds — a grim and horrifying pollution event.

"Those who should be in control are the ones who authorize the poisoning of people," environmental activist Pablo Lada told AFP.

Local residents were getting fed up with a continuous stream of trucks from the industrial park passing through their town called Trelew. The trucks were delivering fish waste to treatment plants just outside of the city and had to pass through town to get there.

So residents started blocking trucks from passing through town in protest. "We get dozens of trucks daily, the residents are getting tired of it," Lada told AFP.

As a result of the blockade, provincial authorities started allowing factories to dump their waste into the lagoon — instead of disposing the waste at the treatment plants in the outskirts of Trelew.

Sodium sulfite is a common antioxidant and preservative. It is predominantly used in the pulp and paper industry, but can also be added to stop dried fruit from discoloring and preserve meats, including prawns.

Despite the unnatural, pinkish hue, officials claim the tinting doesn't do any damage to the surrounding ecosystems and that the effect clears up in just a couple of days.

To environmentalists like Lada, the industrial park's contributions to the economy are outweighed by its environmental footprint.

"Fish processing generates work... it's true," Lada told AFP. "But these are multi-million-dollar profit companies that don't want to pay freight to take the waste to a treatment plant that already exists in Puerto Madryn, 35 miles away, or build a plant closer."

More on the environment: Researcher Stands by Prediction of Civilization Collapse

Dumping DDT
"Countless" Barrels of Toxic Waste Found in Ocean Near Los Angeles
4. 12. 21
Read More
Catalysts Efficiently and Rapidly Remove BPA From Water
8. 11. 17
Read More
Dishonorable Discharge
Scientists Alarmed by Video of Deep Sea Mining Company Spewing Waste Into Ocean
Yesterday
Read More
+Social+Newsletter
TopicsAbout UsContact Us
Copyright ©, Camden Media Inc All Rights Reserved. See our User Agreement, Privacy Policy and Data Use Policy. The material on this site may not be reproduced, distributed, transmitted, cached or otherwise used, except with prior written permission of Futurism. Articles may contain affiliate links which enable us to share in the revenue of any purchases made.
Fonts by Typekit and Monotype.