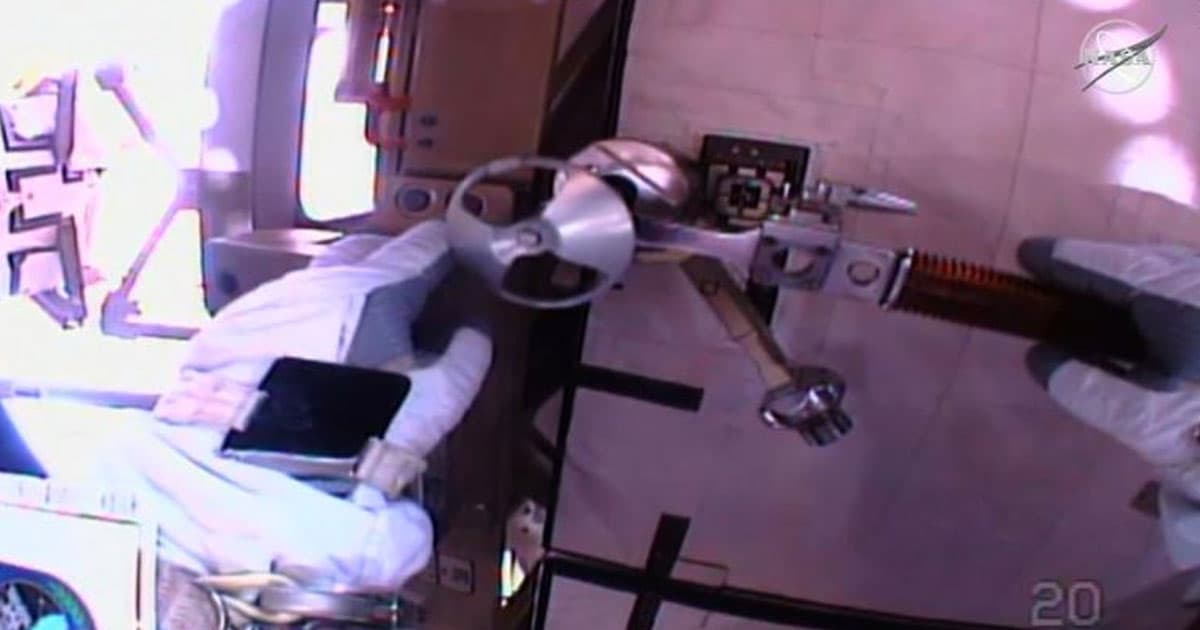 Does anyone else feel a breeze?

Does anyone else feel a breeze?

During an early-morning spacewalk to replace the batteries on the International Space Station — yes, it has those — part of NASA astronaut Chris Cassidy's spacesuit broke off and floated away into the void.

Thankfully, the damage was inconsequential, CNN reports. The only piece that fell off was a small, wrist-mounted mirror that serves a similar purpose as the rearview mirror on a car, letting him see outside the field of vision of his bulky suit. Thus far, the ongoing spacewalk has continued without any other hiccups.

The seven-hour mission began at 7:32 AM EST, CNN reports. Cassidy and fellow astronaut Robert Behnken are traveling back and forth, lugging suitcase-sized battery packs to a distant part of the ISS. Then, on July 1, the duo will do it all over again for a different part of the space station.

Spacewalking is no easy task, but our @NASA_Astronauts train extensively for these moments. This animation show how @AstroBehnken and @Astro_SEAL will work in the vacuum of space to finish replacing the @Space_Station's batteries. https://t.co/UuHV6g2IUE pic.twitter.com/hh8PBtI3mJ

The broken mirror gave Cassidy a way to check various labels and electrical components on his spacesuit, but it's not mission-critical. NASA astronauts have mirrors on their spacesuits' right wrists as well.

Thankfully, the new batteries have a 20-year lifespan, CNN reports. So unless the ISS's retirement date continues to be pushed back, the station should have enough juice for the rest of its life.

"When the space station is in the sun, it's collecting energy and it needs to store for when it's in the dark," Behnken told CNN. "And so those batteries, as they're cycled time and time again, they wear down and need to be replaced. And so periodically that maintenance is required."

More on the ISS: The Space Station Is Getting a New Toilet