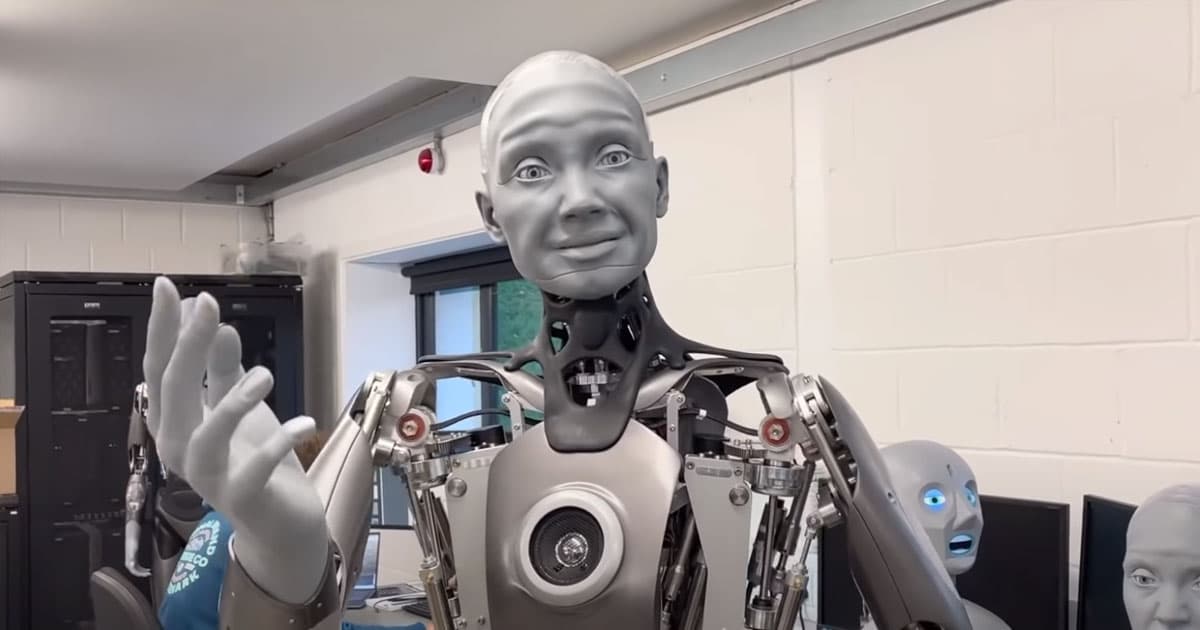 Even Elon Musk weighed in.

Even Elon Musk weighed in.

It's always a bit chilling when you come across a robot that's able to express itself so much like a human being that it almost tricks the brain into thinking it's possessed by a human spirit.

That's more or less what a UK-based robotics company called Engineered Arts managed to pull off with its humanoid robot Ameca. A recently released video shows the grey-faced robot suddenly come alive with human-like facial expressions — and judging by the reactions, we're not the only ones terrified of it.

"Yikes," SpaceX CEO Elon Musk tweeted in response to the video, despite the fact that his electric car company Tesla is working on its own humanoid robot.

Others, though, tamped down the hype.

"Guys calm down, stop freaking out, it's just a bunch of actuators and motors with rubber stretched over them to simulate facial movement," tech YouTuber Marques Brownlee advised on Twitter. "It's all preprogrammed. It's just for research."

Some users on Twitter claimed that Engineered Arts' robot was already ushering in the singularity.

"How come this robot makes more facial expressions than me," one user chimed in.

Others sounded a cautionary note.

"Ummm… have these people learned nothing from watching Westworld?!" another user tweeted.

Some users over on Reddit were shocked by how empathetic they felt to Ameca's many expressions. "This is actually quite charming," one user wrote.

But the most common comparison — of course — was to the Terminator.

"Neat!" one Redditor commented. "Is this the Hunter-Killer or Human Infiltration model?"

Quacks Like a Duck
Watching Elon Musk's Robot Back to Back With Boston Dynamics Is... Something
10. 4. 22
Read More
Tesla Bots Roll Out
Elon Musk Just Announced a Humanoid "Tesla Bot"
8. 20. 21
Read More
FEDOR Android
Parts Suppliers Are Boycotting Russia's Pistol-Shooting Android
3. 1. 19
Read More
+Social+Newsletter
TopicsAbout UsContact Us
Copyright ©, Camden Media Inc All Rights Reserved. See our User Agreement, Privacy Policy and Data Use Policy. The material on this site may not be reproduced, distributed, transmitted, cached or otherwise used, except with prior written permission of Futurism. Articles may contain affiliate links which enable us to share in the revenue of any purchases made.
Fonts by Typekit and Monotype.