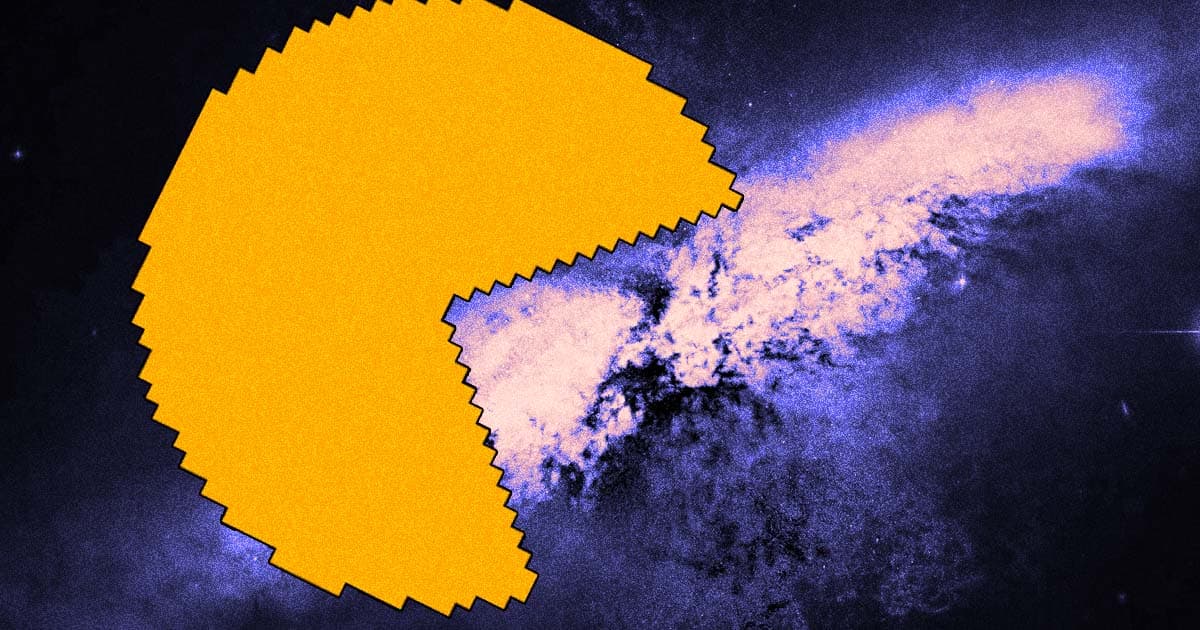 Chances are, at some point, you've looked towards the sky and been awestruck by a cloud that resembles a worldly object. It takes the right place, the right time, and the right kind of imagination.

It's that kind of serendipity that's clearly best suited for a job, say, working at NASA with the Hubble Space Telescope and catching images of the swirling, distant cosmos — as they did last week, when they released an incredible image of supernova remnants that look just like Pac-Man, gobbling up a bunch of stars.

Via Space.com, the image shows N 63A, which is the dregs of a supernova, meaning the explosion that can occur over the final phases of a star's lifespan.

N 63 A — which is located in a satellite galaxy of our own, in what's called the Large Magellanic Cloud (LMG), 163,000 light years away from the Milky Way — isn't a supernova itself, but its aftermath, the mess after the party. While supernovas typically leave a mess of heavy elements and gases all over the place, per NASA, "N 63A is still young, and its ruthless shocks are destroying the ambient gas clouds, rather than coercing them to collapse and form stars."

And yes, it also looks a lot like Pac-Man, chomping up Pac-Man's power pellets, which in this case, would be stars.

Just to be clear, because we have to say it: No, this thing isn't actually eating stars. It's just shaped like it is. Meanwhile, for those in the cheap seats, if you don't know what Pac-Man is, please tell us who's been keeping you locked in a basement all these years.

Pac-Man was released by Japanese video game company Namco in 1980 by a nine-person team, after game director Toru Iwatani invented a character inspired by not a supernova's hangover, but a pizza with a slice taken from it. The game went on to gross over $14 billion in revenue since its release, and is inarguably one of the most ubiquitous pieces of pop culture iconography, full stop (Google even turned it into a playable Google Doodle).

The Pac-Man of it all not withstanding, it's great to see Hubble back up and running after some technical issues hobbled it for a few weeks over the summer. But a working telescope is only worth so much without an excellent imagination at the helm. Clearly, it's not just Hubble that's working well these days: Kudos to whoever at NASA had the wide-eyed wonder to spot this and share it with a world who can also recognize one of its most well-known characters, up there in the sky, looking monstrous and invincible.

Nightmare Fuel
This Horror Story About the Webb Telescope Will Chill Your Bones
7. 11. 22
Read More
Star Light
Ultra-Detailed New Image of Nearby Galaxy Shows Stars Being Born
1. 8. 19
Read More
Hubble Surprise
Hubble Takes Another Incredible Picture After Gyroscope Failure
11. 29. 18
Read More
+Social+Newsletter
TopicsAbout UsContact Us
Copyright ©, Camden Media Inc All Rights Reserved. See our User Agreement, Privacy Policy and Data Use Policy. The material on this site may not be reproduced, distributed, transmitted, cached or otherwise used, except with prior written permission of Futurism. Articles may contain affiliate links which enable us to share in the revenue of any purchases made.
Fonts by Typekit and Monotype.