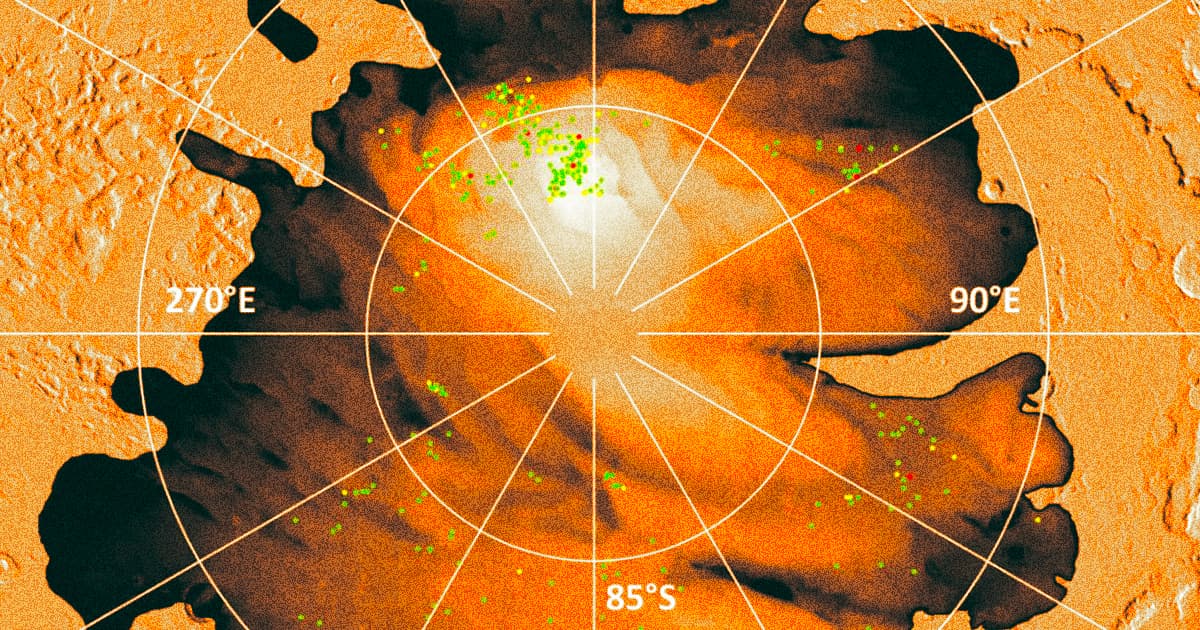 "Either liquid water is common beneath Mars’ south pole, or these signals are indicative of something else."

"Either liquid water is common beneath Mars’ south pole, or these signals are indicative of something else."

It was huge news in 2018 when scientists discovered a massive subterranean lake at the south pole of Mars — and again as they found three more over the next few years.

But it turns out that those earlier studies may have undercounted the number of subterranean lakes at the Martian south pole by a substantial margin, according to research published in the journal Geophysical Research Letters this month. In this latest work, researchers dove into the tens of thousands of published observations of Mars' south pole and uncovered potentially dozens of additional buried lakes — though they admit that some of their findings are ambiguous.

Based on the radar data that the scientists analyzed, the lakes are probably real, according to Space.com. But some of the lakes seem to be located surprisingly close to the surface of the planet, where temperatures are so low that scientists would have expected them to freeze over instead.

"We're not certain whether these signals are liquid water or not, but they appear to be much more widespread than what the original paper found," Jet Propulsion Laboratory researcher and study coauthor Jeffrey Plaut said in a NASA announcement. "Either liquid water is common beneath Mars' south pole, or these signals are indicative of something else."

The researchers suggested that active volcanoes could be keeping the briny subsurface liquids warm enough. But there's no really any evidence of volcanic activity in the area, they concede in the press release, so that idea may not hold up.

For now, the identity of the new Martian lakes and the mechanism that keeps them from freezing over will both remain mysterious, but Plaut hopes that other researchers will take what they've accomplished and figure out what's going on.

"Our mapping gets us a few steps closer to understanding both the extent and the cause of these puzzling radar reflections," he said in the press release.

READ MORE: Mars may have dozens of lakes beneath its south pole [Space.com]