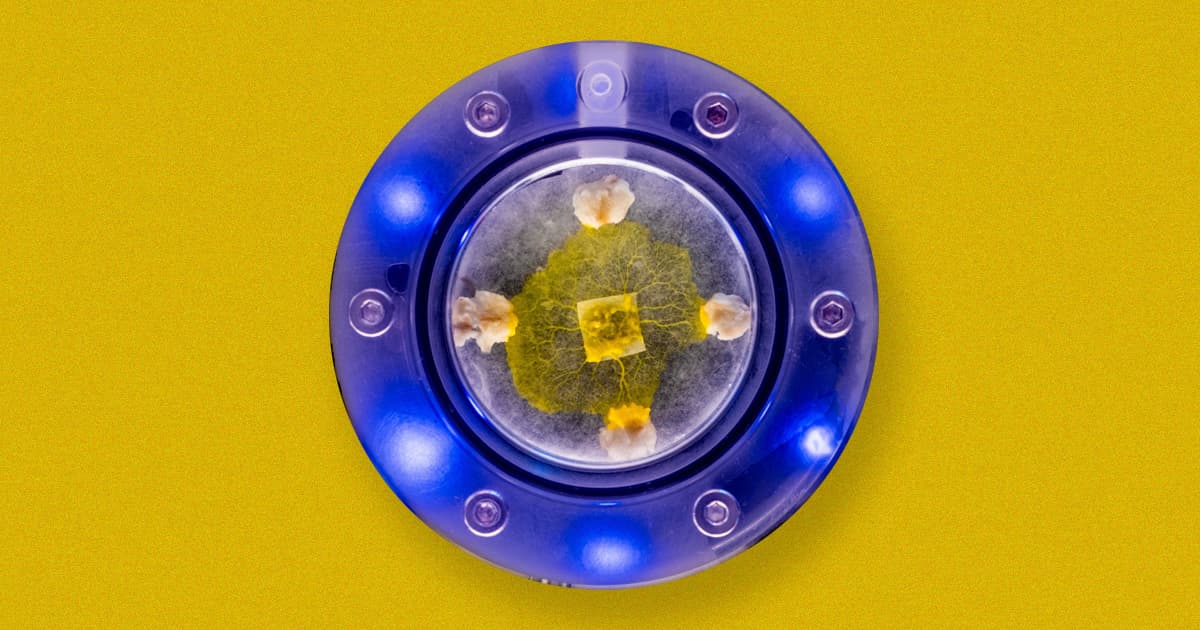 These seriously weird organisms are headed to space. What could possibly go wrong?

These seriously weird organisms are headed to space. What could possibly go wrong?

The European Space Agency (ESA) just launched brainless bits of slime mold to the International Space Station to study how the single-celled organism's behavior is affected by microgravity.

The investigation, led by the French space agency (CNES) on behalf of the European Space Agency (ESA), will give French students aged 10 to 18 the chance to conduct their own scientific experiment in space with the help of station crew member and ESA astronaut Thomas Pesquet.

Pesquet will be filming the behavior of the slime mold in microgravity, while two thousand school classes in France will compare the results with slime mold controls back on Earth.

"Nobody knows what its behavior will be in a microgravity environment: what direction will it move in? Will it take the third dimension by going upwards, or go sideways?" Pierre Ferrand, Earth sciences professor and project member at French space agency CNES, told Agence France-Presse.

The four dormant samples of slime mold were part of the 8,200 pounds of crew supplies and science experiments sent to the station on board a Northrop Grumman Cygnus NG-16 spacecraft on Wednesday.

"Although we still don’t understand how these unicellular slime molds manage to do all this, they have already shattered the dogma that an organism cannot learn without a brain," said Audrey Dussutour, senior researcher at the Research Centre on Animal Cognition (CRCA) who is working on the project, in a statement published in April by the French state research organization (CNRS).

"They can learn and remember, pass on information to their fellow creatures and find their way through a maze, in the same manner as animals that appear to be more sophisticated," she added.

A camera will observe the four Petri dishes of slime molds on the ISS to see how they will reach out to bits of food placed around them. Usually, their strategy is to connect the morsels one by one — but that behavior may be different in microgravity.

The students will then compare the results to the control slimes back on Earth to observe how microgravity changes their behavior.

"We’re hoping to be able to send more to the ISS during a future mission, especially if they turn out to exhibit surprising behavior once in space," Dussutour said in the statement.

"For now, we will be happy if they simply wake up, since we don’t know how they will react to weightlessness," she added.

More on the ISS: Space Station Astronauts Threw Their Own Zero-G Olympic Games

Into Darkness
Inside NASA's Bold Proposal to Probe the Mysteries of Dark Matter
3. 11. 22
Read More
Water Canyon
Scientists Spot Hidden Water in Mars' Grand Canyon
12. 15. 21
Read More
Martian Ammonia
NASA Rover Detects Organic Molecules on the Surface of Mars
11. 2. 21
Read More
+Social+Newsletter
TopicsAbout UsContact Us
Copyright ©, Camden Media Inc All Rights Reserved. See our User Agreement, Privacy Policy and Data Use Policy. The material on this site may not be reproduced, distributed, transmitted, cached or otherwise used, except with prior written permission of Futurism. Articles may contain affiliate links which enable us to share in the revenue of any purchases made.
Fonts by Typekit and Monotype.