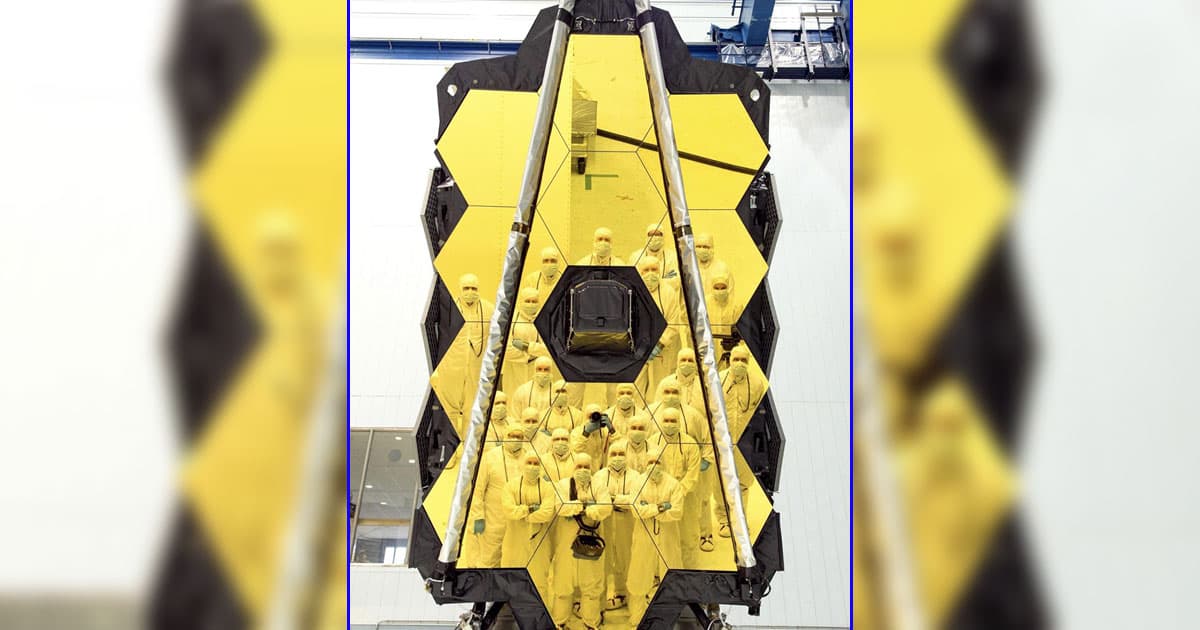 "Everything is hunky-dory and doing well now."

"Everything is hunky-dory and doing well now."

Long before sending off NASA's James Webb Space Telescope on its long journey into deep space last month, engineers took the opportunity to take an epic group selfie back in 2017 — using their reflection in the telescope's 21-foot mirror.

It's an awe-inspiring look at the sheer scale of the operation that went viral on Reddit after the launch, not to mention a fitting homage to the thousands of scientists who made last week's launch happen.

Coolest selfie. NASA scientists post photo with James Webb telescope (via Reddit). I’m excitedly anticipating what this will reveal about the universe. pic.twitter.com/bycAJ0ndWg

The massive structure took off on top of an Ariane 5 rocket from a spaceport in French Guiana on December 25, the culmination of tens of billions of dollars spent and decades of research and development.

Fortunately, everything is still going according plan — which is significant, given the hundreds of maneuvers the telescope has to complete to fully unfurl itself before becoming operational in a distant orbit around the Sun.

"Everything is hunky-dory and doing well now," Amy Lo, a lead engineer for the telescope’s prime contractor, Northrop Grumman, during a Monday press conference, as quoted by the Associated Press.

Over the weekend, the telescope successfully extended its sunshield, a protective cover designed to keep its scientific instruments safe and protected from harmful solar rays.

Chances are we won't be hearing much from the JWST team over the next coming days — and that's a good thing.

"The best thing for operations is boring, and that’s what we anticipate over the next three days, is to be boring," project manager Bill Ochs said during the conference.

More on the telescope: The James Webb Space Telescope Is Officially Unfurling Its Mighty Sunshield

Makeover Scene
Space Tourist Says He's Thinking About Flying SpaceX Craft Up to Fix Hubble
Sep 29
Read More
Palliative Care
NASA's Mars Lander Refuses to Die Even Though It's Supposed To
Sep 24
Read More
Origins Machines
The JWST's Data Is So Incredible That Even Those Who Built It Are Questioning Previous Science
Sep 21
Read More
+Social+Newsletter
TopicsAbout UsContact Us
Copyright ©, Camden Media Inc All Rights Reserved. See our User Agreement, Privacy Policy and Data Use Policy. The material on this site may not be reproduced, distributed, transmitted, cached or otherwise used, except with prior written permission of Futurism. Articles may contain affiliate links which enable us to share in the revenue of any purchases made.
Fonts by Typekit and Monotype.