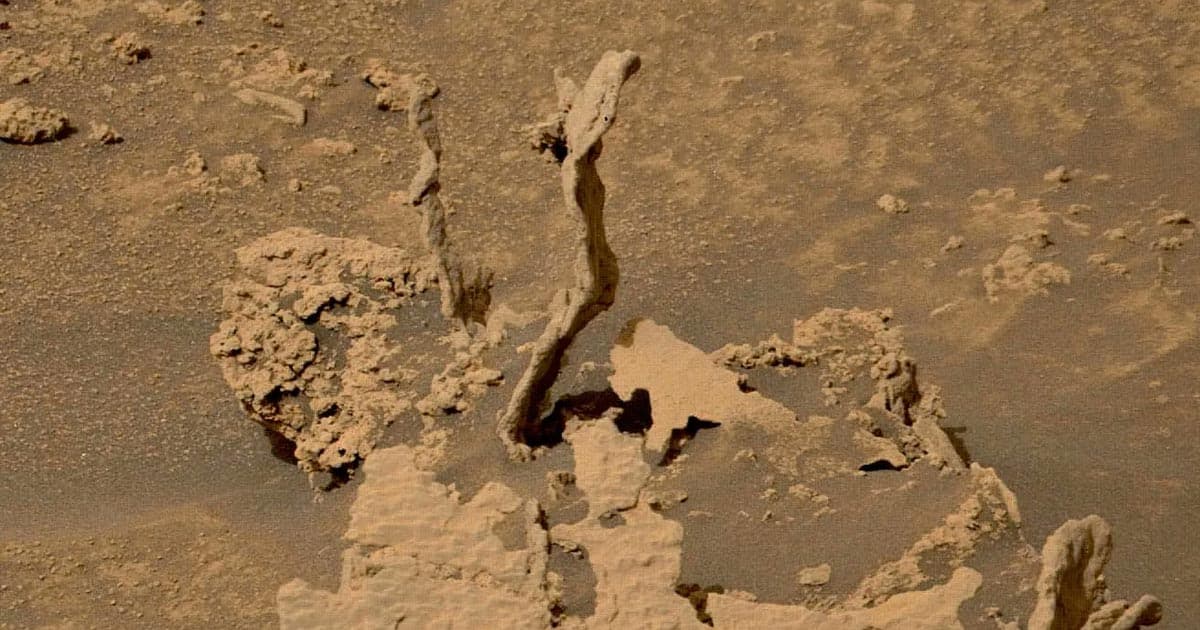 What the heck are those?

What the heck are those?

NASA's Curiosity Mars rover has been capturing some amazing shots of the Red Planet lately.

There was that thing that looked a bit like a "doorway" on Mars last month, for instance — but which later turned out to be a tiny gap in ancient sandstone.

Now, we get to see Curiosity's next fascinating discovery: two ancient "spikes" of cemented rock that almost look like the petrified remains of ancient trees.

"Here is another cool rock at Gale crater on Mars!" the SETI Institute wrote last week. "The spikes are most likely the cemented fillings of ancient fractures in a sedimentary rock. The rest of the rock was made of softer material and was eroded away."

#PPOD: Here is another cool rock at Gale crater on Mars! The spikes are most likely the cemented fillings of ancient fractures in a sedimentary rock. The rest of the rock was made of softer material and was eroded away. 📷: @NASA @NASAJPL @Caltech #MSSS fredk, acquired on May 17. pic.twitter.com/RGfjmRBfI7

The image was taken by Curiosity on May 15 using its Mastcam instrument. The Curiosity team at NASA's Jet Propulsion Lab has yet to comment on the rather odd finding, so we can't really say with any degree of certainty what it is yet.

Futurism has reached out to the team to find out more.

Nonetheless, it's a fascinating glimpse into the Red Planet's geological past. Curiosity has been exploring the surrounding Gale crater for almost an entire decade.

Scientists suspect the massive, 96-miles-across crater was formed after a massive meteor hit the planet's surface around 3.7 billion years ago, around the time Mars is believed to have been covered in large lakes and flowing rivers.

Could the spikes date back to the times the crater was formed? Stay tuned to find out.

More on Curiosity: Scientists Extremely Intrigued by Possible Sign of Life on Mars

Martian Oases
Scientist Proposes Growing a Forest Inside a Bubble on Mars
Dec 3
Read More
Putting Things In Perspective
Amazing Artemis Photo Shows Every Human, Alive or Dead, Plus the Moon
Nov 29
Read More
Fighting Words
Retired NASA Astronaut Scott Kelly Dishes on Ukraine, Russia, and Moon Mission
Nov 21
Read More
+Social+Newsletter
TopicsAbout UsContact Us
Copyright ©, Camden Media Inc All Rights Reserved. See our User Agreement, Privacy Policy and Data Use Policy. The material on this site may not be reproduced, distributed, transmitted, cached or otherwise used, except with prior written permission of Futurism. Articles may contain affiliate links which enable us to share in the revenue of any purchases made.
Fonts by Typekit and Monotype.