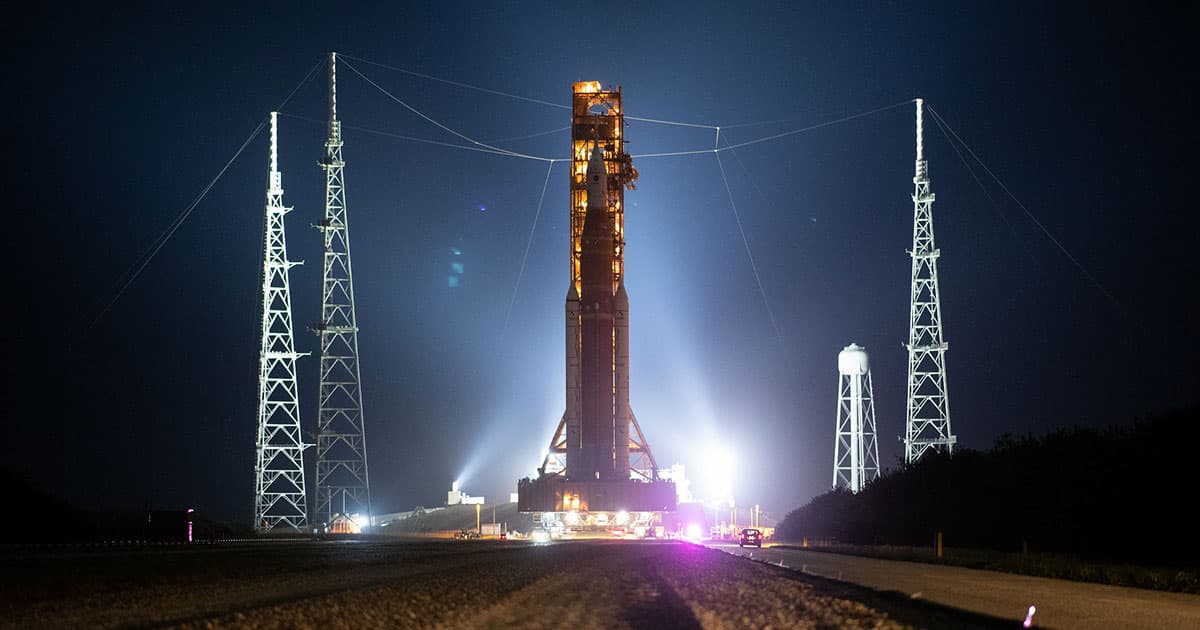 NASA Rolls Moon Rocket Out to the Pad for Lunar Mission

Back on the Pad

NASA has rolled out its gigantic Space Launch System (SLS) Moon rocket to the launch pad at the Kennedy Space Center yet again.

The goal is to launch the spacecraft, with the agency's Orion spacecraft attached, on November 14, sending the uncrewed capsule around the Moon and back as the first test of equipment meant to bring the first astronauts back to the Moon since the early 1970s.

The rocket was originally meant to launch in late August, but the attempt was scrapped due to a technical issue. The second attempt in early September also had to be scrapped due to a gas leak. A third attempt was preemptively called off, with the rocket being hauled to NASA's massive Vehicle Assembly Building (VAB)  due to Hurricane Ian.

Will it finally make it off the ground this time? Well, it's possible.

While getting the mission, dubbed Artemis I, off the ground has proven to be more technically challenging than anticipated, NASA hasn't given up on its uber-expensive rocket.

Launching at night will add complexities, but NASA thinks they can be overcome.

"The visual references obviously are what you lose, in terms of launching at night, but obviously we have [infrared cameras]," said Cliff Lanham, senior vehicle operations manager at NASA, during the press conference. "But we have a great number of cameras that we'll still get shots from."

Now, all we can do is wait for next week and hope for some favorable weather.

Fortunately, according to Weather.com meteorologist Chris Dolce, November "as a whole is generally more hospitable for good launch conditions when compared to summer’s often storm-plagued afternoons."

More on the mission: NASA Announces Plan to Fix Moon Rocket, and Maybe Launch It Eventually