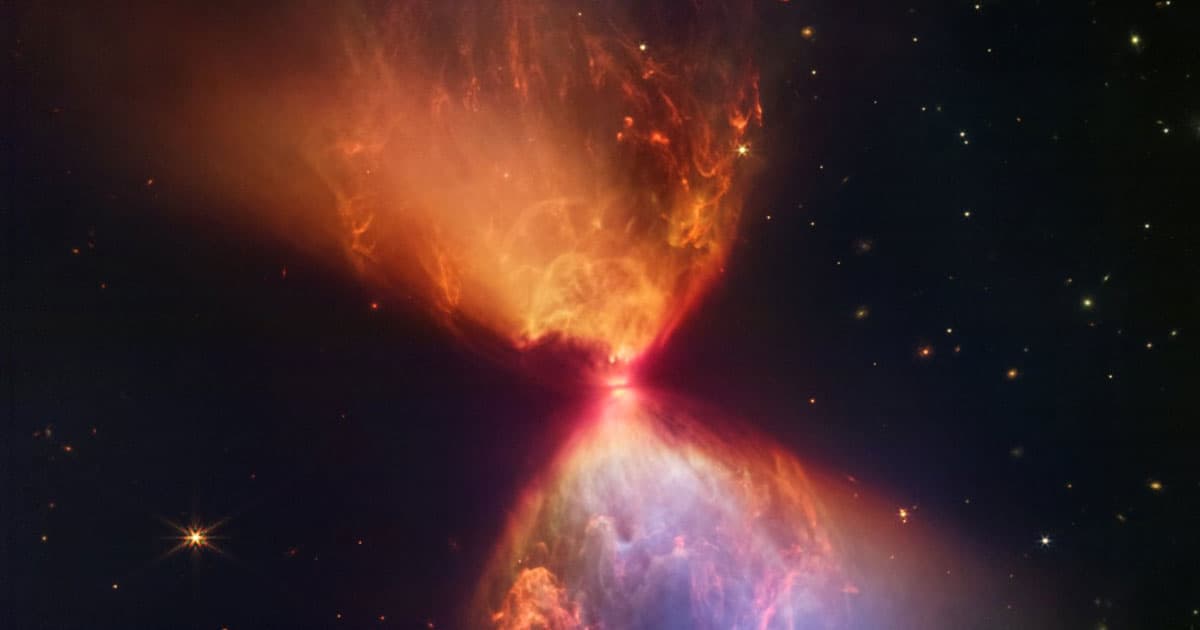 The James Webb Space Telescope's latest mind-bending image just dropped — and this one is, in a word, splendid.

As NASA notes in a blog post about the finding, the telescope's Near-Infrared Camera (NIRCam) was put to incredible use when capturing the "once-hidden features" of the beginnings of a star.

Known as "protostars," celestial objects like this one — found inside an uber-absorbant "dark nebula" cloud — are not yet stars, but will be soon. In short, the Webb telescope capture imagery of a star being born.

As NASA notes, the fledgling star itself is hidden within the tiny "neck" disk of the spectacular, fiery hourglass shape in the image — which is, as NASA notes, "about the size of our solar system" — and the colorful lights seen below and above this neck are emitted by the protostar's birth.

Countdown to a new star ⏳

Hidden in the neck of this “hourglass” of light are the very beginnings of a new star — a protostar. The clouds of dust and gas within this region are only visible in infrared light, the wavelengths that Webb specializes in: https://t.co/DtazblATMW pic.twitter.com/aGEEBO9BB8

While this incredible capture is not the first time space telescopes have observed star birth, Webb's latest does provide an incredible look at the phenomenon.

"The surrounding molecular cloud is made up of dense dust and gas being drawn to the center, where the protostar resides," the post reads. "As the material falls in, it spirals around the center. This creates a dense disk of material, known as an accretion disk, which feeds material to the protostar."

Some of that material, NASA notes, are "filaments of molecular hydrogen that have been shocked as the protostar ejects material away from it," most of which the stellar fetus takes for itself. It continues to feed on that material, growing more massive and compressing further until its core temperature rises to the point that it kickstarts nuclear fusion.

This gorgeous peek at that process is extraordinary to witness — and a yet another testament to the power of the mighty James Webb.

The James Webb Space Telescope Is Going to Stare Straight Into Jupiter
Apr 12
Read More
Into Darkness
Inside NASA's Bold Proposal to Probe the Mysteries of Dark Matter
Mar 11
Read More
Martian Ammonia
NASA Rover Detects Organic Molecules on the Surface of Mars
11. 2. 21
Read More
+Social+Newsletter
TopicsAbout UsContact Us
Copyright ©, Camden Media Inc All Rights Reserved. See our User Agreement, Privacy Policy and Data Use Policy. The material on this site may not be reproduced, distributed, transmitted, cached or otherwise used, except with prior written permission of Futurism. Articles may contain affiliate links which enable us to share in the revenue of any purchases made.
Fonts by Typekit and Monotype.