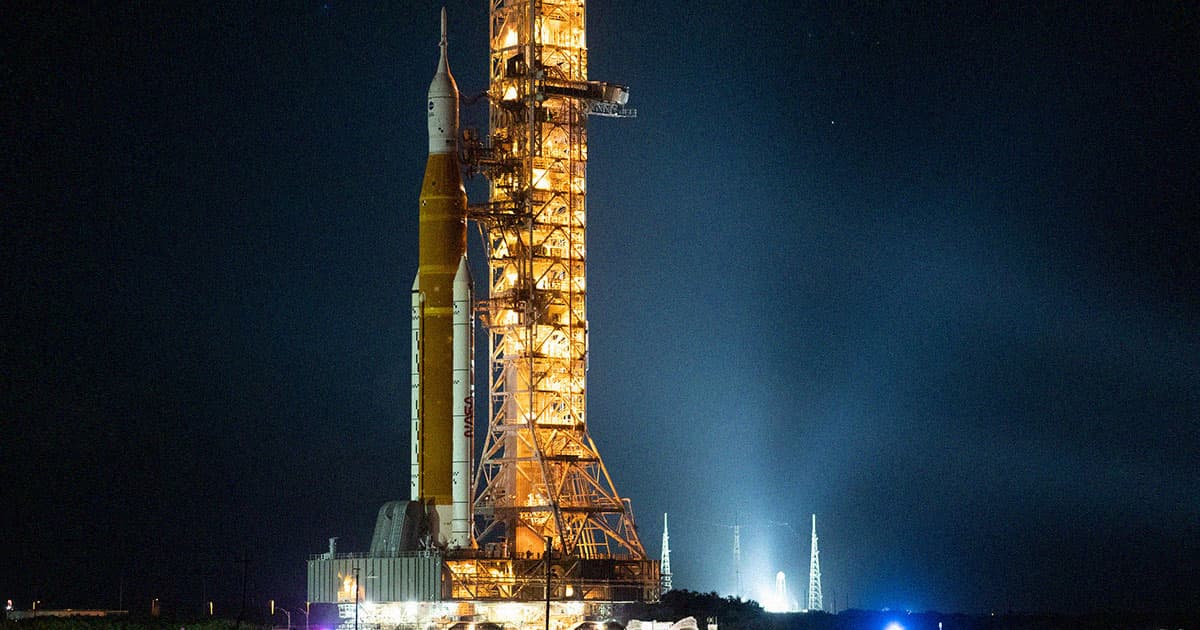 The winds were even stronger than expected.

The winds were even stronger than expected.

The winds really started to pick up at NASA's Kennedy Space Center in Florida, as Hurricane Nicole made landfall earlier today.

And that's bad news, as the agency's uber-expensive Space Launch System (SLS) Moon rocket is currently sitting on the launch pad, fully exposed to the elements, awaiting its November 14 launch attempt next week.

Now, engineers are starting their inspections, ensuring the rocket weathered the storm intact and is ready for prime time.

Winds reached 87 knots (about 100 mph) at the site, in strong hurricane-level gusts that were forecast by the National Weather Service.

Earlier this week, the National Hurricane Center predicted a 15 percent chance of hurricane-grade winds at the launch site — which appear to have materialized, Ars Technica reports.

And that's a problem: while NASA claimed on Tuesday that "high winds that are not expected to exceed the SLS design," according to documentation, the rocket is only designed to withstand gusts of up to 74.4 knots.

"Almost certainly there is some safety margin above 74.4 knots, but is it 15 or 20 percent higher?" Ars' Eric Berger tweeted. "Rockets are simply not designed to be battered like this by sideways winds for hours and hours."

According to weather sensors on Launch Complex-39B, the Artemis I stack saw wind gusts as high as 87 knots on the 120-foot level last night. The rocket is designed to withstand 74.4-knot gusts. pic.twitter.com/pkBuwFB6TH

Now, engineers are starting to inspect the rocket to see if the winds have left a mark.

"I am imagining, if the rocket is exposed to excessive winds, the effort that will ensue to redo the structural analysis and convince everyone to sign the waiver to let it fly," former NASA space shuttle engineer Phil Metzger tweeted. "It’s gonna be a busy couple of weeks for NASA structural engineers."

In short, the SLS rollout was one big gamble. As Ars points out, it would've taken days for NASA to roll its massive rocket back in to the Vehicle Assembly Building, where the rocket spent the last couple of months following several failed launch attempts earlier this year.

Where that leaves next week's launch attempt remains to be seen. NASA is giving itself until Sunday evening to make the call.

It's a scary moment for NASA: billions of dollars were literally exposed to the elements. All we can do is hope it held up.