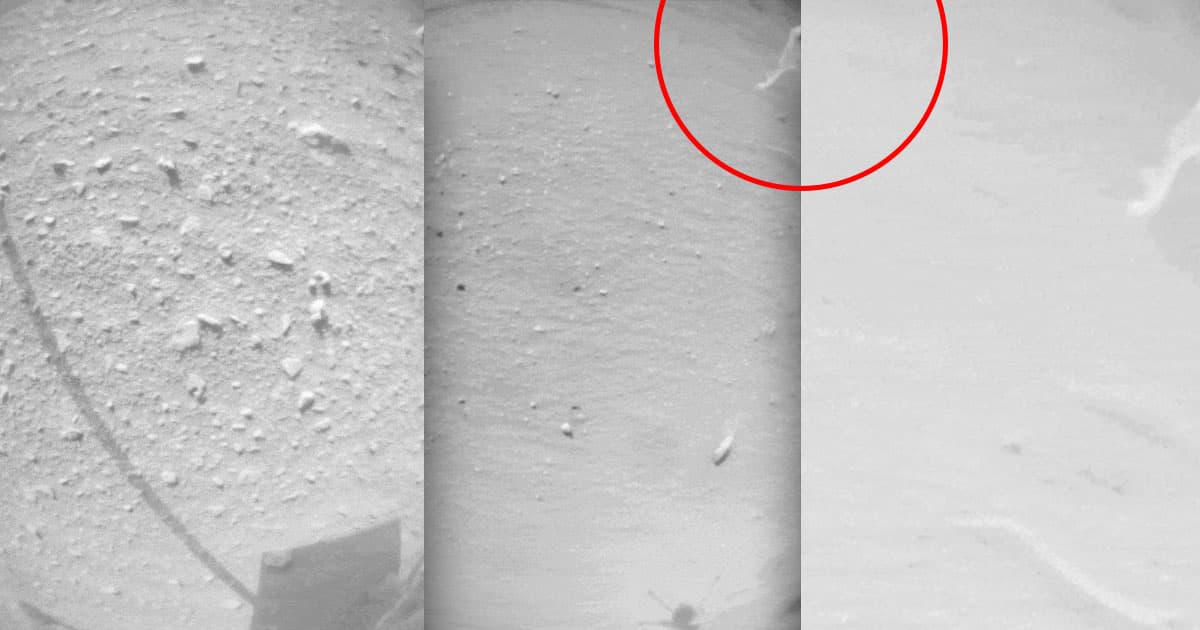 "There's something on your foot, Mars Helicopter!"

"There's something on your foot, Mars Helicopter!"

NASA's Ingenuity Mars helicopter spotted some strange junk briefly hanging from one of its landing legs like an errant piece of extraterrestrial toilet paper — and we still don't know where it came from.

"There's something on your foot, Mars Helicopter!" wrote NASA's Jet Propulsion Lab. "We’re looking into a bit of debris that ended up on Ingenuity's foot during its latest aerial commute."

It's the latest in a string of mysterious jetsam — most if not all likely originating from NASA's various robotic explorers and their landing gear — littering the Martian landscape, a sign we're leaving a definitive mark on the planet's surface.

There's something on your foot, #MarsHelicopter! 👀
We’re looking into a bit of debris that ended up on Ingenuity's foot during its latest aerial commute. As shown in the GIF, it eventually came off and did not impact a successful Flight 33. https://t.co/S78Chpo2uO pic.twitter.com/oFnRUBy4aq

According to a very short NASA statement, the helicopter snapped images of a "small piece of foreign object debris" during its 33rd flight, which took place over the weekend. The small object wasn't visible during Ingenuity's preceding flight.

Footage shows the straggling, cloth-like object hanging onto one of the helicopter's four legs during lift off before harmlessly drifting away.

NASA says that the "Ingenuity and Perseverance Mars 2020 teams are currently working to determine the source of the debris."

The small four-pound helicopter has surpassed all expectations and is still embarking on flights almost a year and a half after its maiden voyage.

And that's bound to be a huge strain on its hardware. While we're still unsure of the foreign object's origins, it fortunately doesn't sound like it's going to slow the little helicopter down.

"All telemetry from the flight and a post-flight search and transfer are nominal and show no indication of vehicle damage," NASA wrote in its update.