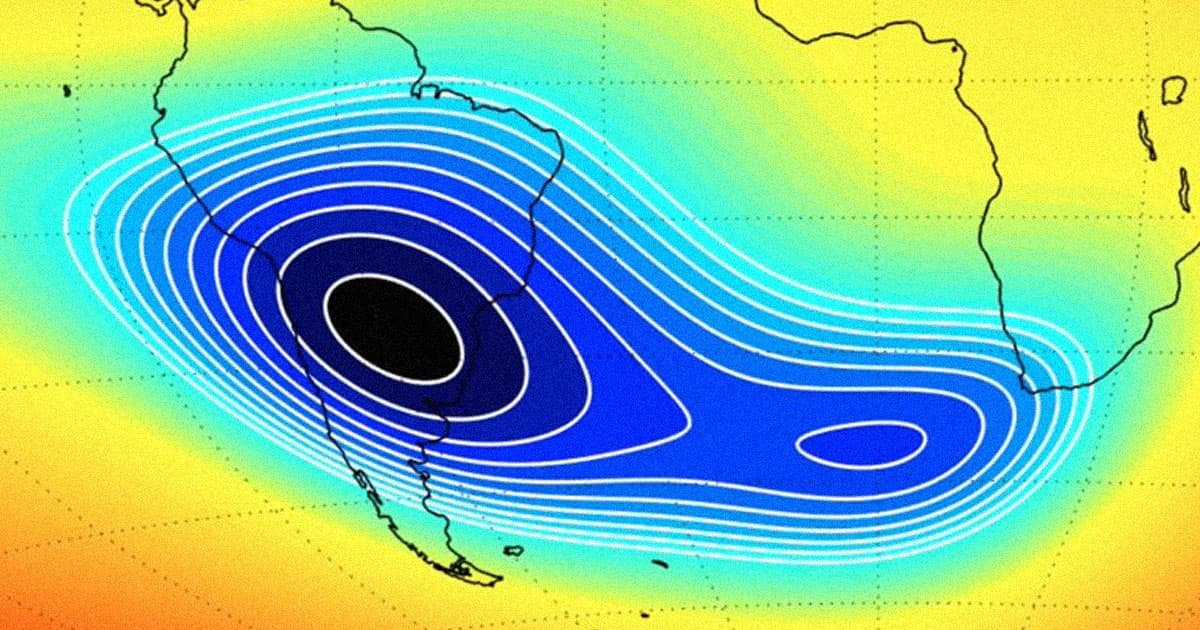 NASA Is Tracking a "Dent" in the Earth's Magnetic Field

NASA scientists have been tracking a strange "dent" in the Earth's magnetic field as it slowly moves westwards over South America and the southern Atlantic Ocean.

The Earth's magnetic field is what protects us from highly charged particles arriving to our planet from the Sun, known as solar winds.

But scientists have noticed that this effect weakens significantly in a specific area above the South Atlantic known as the "South Atlantic Anomaly" (SAA). The area has been known for some time, but now researchers are now observing that it's moving westwards — and even splitting into two lobes, according to a NASA statement.

"A localized field with reversed polarity grows strongly in the SAA region, thus making the field intensity very weak, weaker than that of the surrounding regions," Weijia Kuang, a geophysicist and mathematician in Goddard’s Geodesy and Geophysics Laboratory, explained in the statement.

That's why a team of NASA scientists are keeping close tabs on the moving "pothole in space," as the agency refers to it, by creating long-term space weather forecasts.

“Even though the SAA is slow-moving, it is going through some change in morphology, so it’s also important that we keep observing it by having continued missions,” Terry Sabaka, a geophysicist at NASA’s Goddard Space Flight Center, said in the statement. “Because that’s what helps us make models and predictions.”

Hulk Smash Planets
Watch These Brutal Simulations of Apocalyptic Planetary Collisions
7. 21. 20
Read More
Theia is Alive
Fragment of Planet That Hit Earth May Be Buried Inside Moon
3. 10. 20
Read More
Earth's Magnetic Field is Doing Something Very Strange
12. 18. 19
Read More
+Social+Newsletter
TopicsAbout UsContact Us
Copyright ©, Camden Media Inc All Rights Reserved. See our User Agreement, Privacy Policy and Data Use Policy. The material on this site may not be reproduced, distributed, transmitted, cached or otherwise used, except with prior written permission of Futurism. Fonts by Typekit and Monotype.