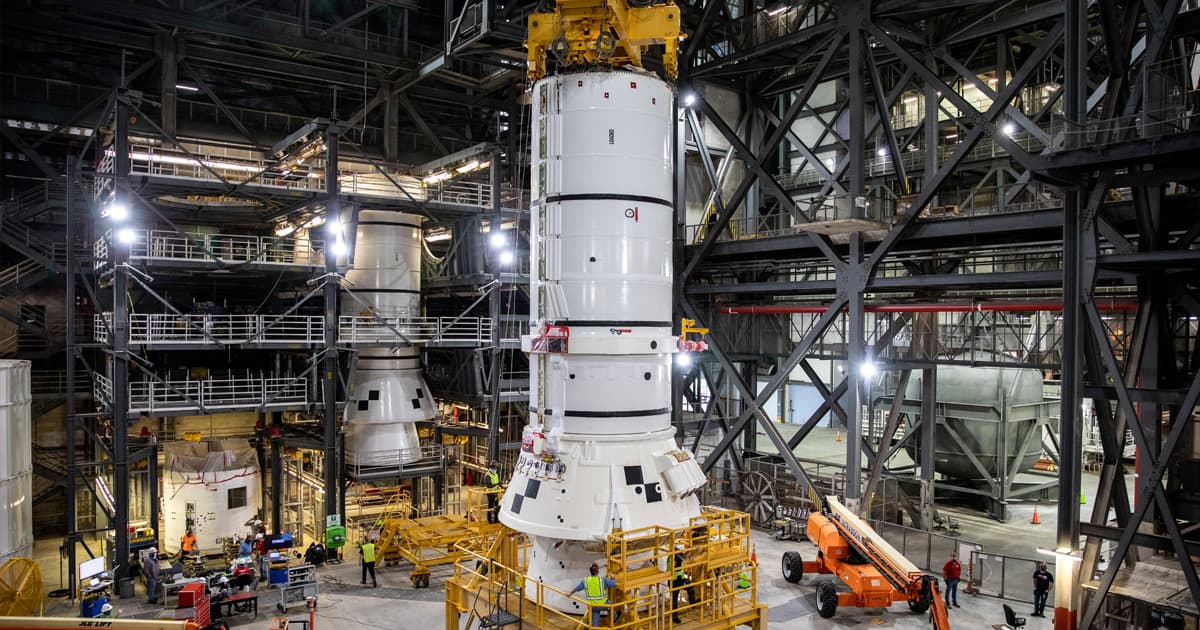 NASA Is Officially Assembling the SLS in Florida

Its first flight is set for some time next year.

Its first flight is set for some time next year.

NASA has officially started stacking booster segments of its first heavy-lift Space Launch System (SLS) at the Kennedy Space Center in Florida, with a planned first flight set for some time next year.

The agency has ambitious plans for the massive rocket. It wants to use it to launch the first Artemis astronauts to the Moon as soon as 2024 — though, according to the agency itself, that timeline is looking dubious.

The SLS has been plagued by delays and has been under development for more than a decade. Development has also been running over budget year after year.

Despite the delays, the agency is excited to get building. Engineers will first start assembling the two massive outboard boosters flanking the core stage on a 380-foot-tall mobile launcher.

"Stacking the first piece of the SLS rocket on the mobile launcher marks a major milestone for the Artemis Program," Andrew Shroble, an integrated operations flow manager with contractor Jacobs, said in a NASA statement. "It shows the mission is truly taking shape and will soon head to the launch pad."

The agency's SLS contractor, Northrop Grumman, also recently completed the first full-scale test of an SLS booster at the company's test facility in Promontory, Utah. It was a fiery display, burning so bright it set a nearby hillside on fire.

If everything goes according to plan — and there is an unfathomable amount of work still to be done — an SLS rocket will carry the space agency's Orion spacecraft with an astronaut crew on board to lunar orbit in as little as four years.

More on the SLS: NASA Tests Rocket So Huge It Lights Entire Hillside on Fire