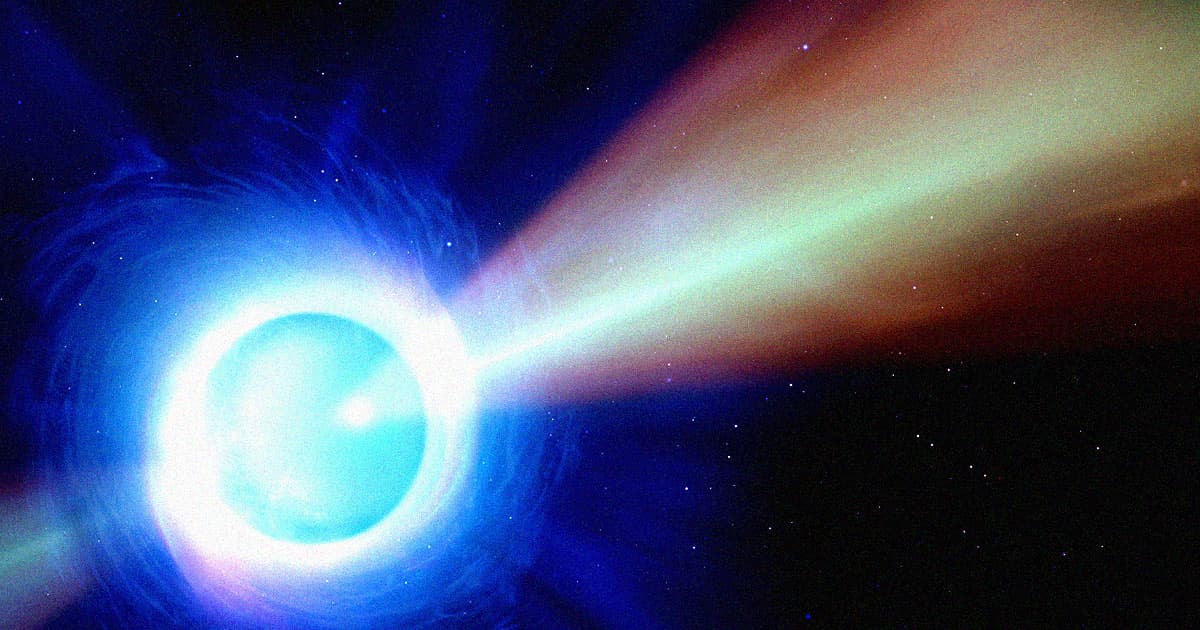 It's only ten miles across, but "can create a structure so big that we can see it from thousands of light-years away."

It's only ten miles across, but "can create a structure so big that we can see it from thousands of light-years away."

Then have a look at these latest photos from NASA's Chandra X-Ray Observatory, which show an x-ray beam made up of both matter and antimatter 40 trillion kilometers long, flowing out of a collapsing star.

The source of the beam, the rotating and collapsing remains of a star otherwise known as a pulsar, is located about 1,600 light years from Earth and is considered "relatively small" even though it's roughly the size of a city, according to NASA.

It rotates three times per second and is moving through space at roughly a million miles per hour.

As NASA notes in a press release, the gargantuan x-ray beam may help scientists understand why the Milky Way is practically bursting at the seams with antimatter, the antithesis to matter that has puzzled scientists for almost a century.

A city-sized collapsed star has generated a beam of matter and antimatter that stretches for trillions of kilometers. This discovery could help explain the presence of positrons detected throughout the Milky Way galaxy and here on Earth. More: https://t.co/E7A3ZjgUT6 pic.twitter.com/YnPkU4N1Z5

This Could Be Huge

Though scientists know what antimatter is in theory, they still don't know how it got into our galaxy.

But in a forthcoming study to be published in the Astrophysical Journal, Stanford University researchers Martjin de Vries and Roger Romani suggest they may have found one answer: positrons, the antimatter equivalent of electrons, may originate from energy fields generated by rapidly spinning pulsars like the one pictured by the Chandra observatory.

That's in stark contrast to prevailing theories that positrons generally have trouble leaking out from pulsars and therefore can't account for the abundance of antimatter in our galaxy, according to NASA.

"It's amazing that a pulsar that's only ten miles across can create a structure so big that we can see it from thousands of light-years away," said de Vries in the statement.

"With the same relative size, if the filament stretched from New York to Los Angeles the pulsar would be about 100 times smaller than the tiniest object visible to the naked eye," he added.

It's a discovery involving some truly mind-boggling numbers. But considering that some physicists believe there may be an entire antimatter universe that moves backwards in time from the Big Bang, it doesn't seem all that far-fetched.

More on antimatter: Physicists Find Particles That Switch Between Matter and Antimatter