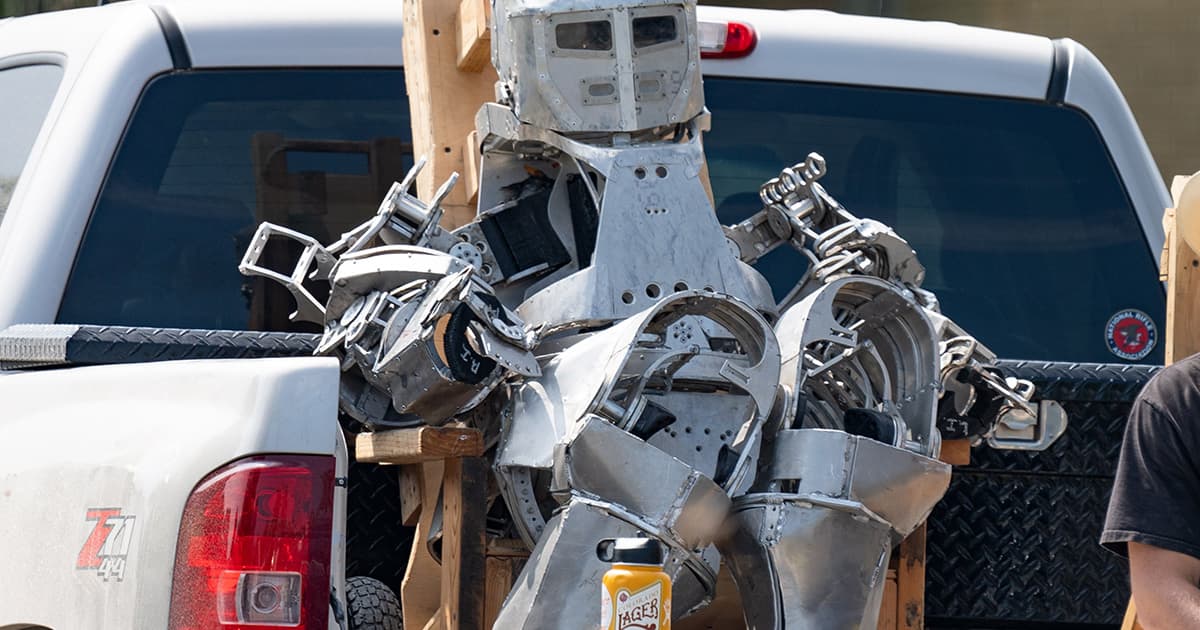 A photographer spotted something intriguing being transported on the back of a pickup truck at SpaceX’s “Starbase” testing facilities in South Texas.

An image shared by the RGV Aerial Photography — which is Patreon-supported — shows what appears to be some kind of robot armor.

Just spotted this robot decoration at Starbase!@elonmusk is this made out of Starship parts? pic.twitter.com/SXDQMJlPUv

The suit’s purpose is still entirely unclear. We have no idea what it is, who made it, or what it is for.

But given the fact that Tesla, SpaceX CEO Elon Musk’s car venture, recently revealed that it is working on a humanoid robot called Tesla Bot, the discovery is more than just strange. We’ve got a lot of questions.

For now, all we can do is hazard a guess.

“Did Elon Musk finally start working on the Iron-Man suit?” one redditor chimed in. “Because that looks like the Mark I.”

They’re not wrong. It does bear a more-than-passing resemblance to the fictional Tony Stark’s first version of his Iron Man suit in the Marvel franchise.

One thing’s for sure: if it’s meant for Halloween festivities, someone put a lot of work into it.

“This doesn’t look like a decoration,” another redditor suggested. “It looks like a suit that a human could wear.”

The craftsmanship, others pointed out, looks impressive. The suit appears to be crafted from aluminum and integrates what look like pads for comfortable wearing.

In other words, are we looking at an extremely elaborate Halloween costume?

“All joking aside, someone put a lot of time into this thing,” one redditor argued.

Tesla already tried selling a dancer in a suit as an early prototype of its Tesla Bot on stage — not that anybody would’ve been fooled.

Is SpaceX now trying to do the same? It’s a big mystery. Perhaps on October 31, we will have an answer.

TV for Your Face
Elon Musk Says the Metaverse Sucks and Neuralink Will Be Better
12. 22. 21
Read More
Diner Drama
People Furious at Robot Serving Pancakes at Denny’s
11. 28. 21
Read More
Killer Robot Update
Uh Oh, They Strapped a Sniper Rifle to a Robot Dog
10. 12. 21
Read More
+Social+Newsletter
TopicsAbout UsContact Us
Copyright ©, Camden Media Inc All Rights Reserved. See our User Agreement, Privacy Policy and Data Use Policy. The material on this site may not be reproduced, distributed, transmitted, cached or otherwise used, except with prior written permission of Futurism. Fonts by Typekit and Monotype.